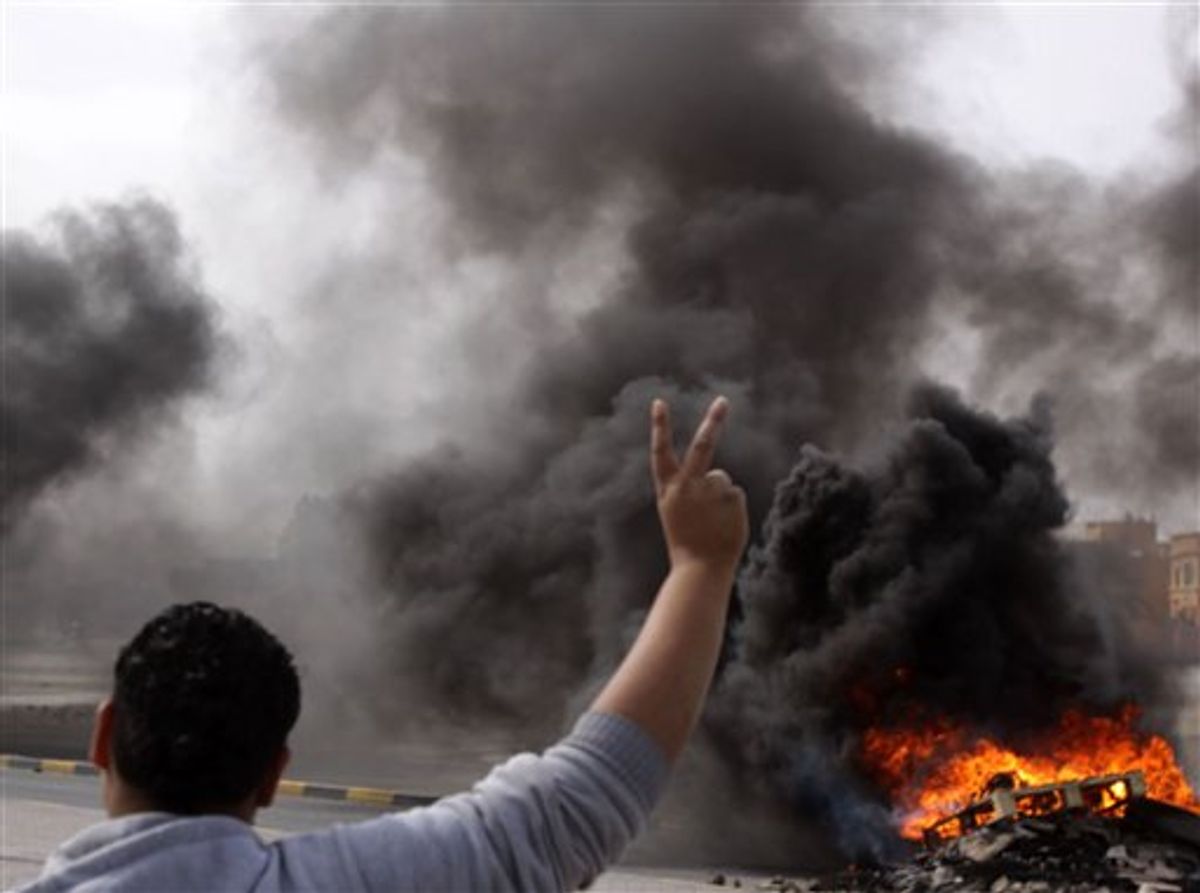 Shiite Bahraini youths burn tires Wednesday, March 16, 2011, near a shopping mall in Malkiya, Bahrain as they awaited government forces they anticipated would roll into their Shiite Muslim village southwest of the capital of Manama. They said they tried to get to Manama to join anti-government protesters under attack there but found all ways in to the capital closed. (AP Photo/Hasan Jamali) (AP)
--

Soldiers and riot police expelled hundreds of protesters from a landmark square in Bahrain's capital on Wednesday, using tear gas and armored vehicles to try to subdue the growing movement challenging the 200-year-old monarchy. At least five people were killed as clashes flared across the kingdom, according to witnesses and officials.

The unrest that began last month has increasingly showed signs of a sectarian showdown: The country's Sunni leaders are desperate to hold power, and majority Shiites are calling for an end to their dynasty. A Saudi-led force from Gulf allies, fearful for their own regimes and worried about Shiite Iran's growing influence, has grown to more than 1,000 soldiers.

Wednesday's full-scale assault was launched at dawn in Pearl Square, the center of the uprising inspired by Arab revolts in Egypt and Tunisia. Hours later, security forces were picking through burned debris and other remains of the protest camp.

In another area of Bahrain, one witness described police in a village "hunting" Shiites in what could be part of a wider campaign of intimidation.

The king's announcement Tuesday of a three-month emergency rule and the crackdown on Pearl Square sent a message that authorities will strike back with overwhelming force in the strategic island nation, which hosts the U.S. Navy's 5th Fleet.

Security forces barred journalists and others from moving freely around Manama and other areas of the country a day after emergency rule was declared. A 4 p.m to 4 a.m. curfew was imposed in most of the country.

U.S. Secretary of State Hillary Rodham Clinton, in an interview with CBS News, called the escalating violence in Bahrain "alarming" and said the introduction of Gulf forces was "the wrong track."

"There is no security answer to this and the sooner they get back to the negotiating table and start trying to answer the legitimate needs of the people, the sooner there can be a resolution that will be in the best interests of everyone," she said.

Witnesses said at least two protesters were killed when the square was stormed. Officials at Ibn Nafees Hospital said a third protester died later from wounds. The witnesses spoke on condition of anonymity because of fears of reprisals from authorities.

But a government statement said the only fatalities during the raid were two policemen who were "repeatedly run over by three vehicles containing protesters leaving the fringes of the scene." The Interior Ministry also said a policeman was killed late Tuesday.

The government did not say whether the offensive included soldiers from other Gulf nations.

State TV broadcast video showing military vehicles in the square flying Bahrain's red-and-white flag as security officials moved through the wreckage of the encampment, set up at the base of a towering monument to the country's history as a pearl diving center. The video showed the ground littered with debris, including satellite dishes and charred tent poles.

Helicopters crisscrossed over the square, which was cleared by security forces late last month but was later retaken by protesters after a deadly confrontation with army units.

During the attack, protesters fled for cover into side streets and security forces blocked main roads into Manama. Mobile phones were apparently jammed in central Manama during the height of the attack and Internet service remained at a crawl.

Hamid Zuher, a 32-year-old protester who slept at the square, said riot police first moved in on foot.

"They fired tear gas and then opened fire," Zuher said. "We lifted our arms and started saying 'Peaceful, Peaceful.' Then we had to run away."

The government presented a different story, saying security forces came under attack from about 250 "saboteurs" hurling gasoline bombs and later fired back with tear gas. It said no live ammunition was used.

In Shiite villages, people went to mosques and held protest prayers. Others lit fires in anger. Clashes were reported in other mostly Shiite areas of the country, where traffic was tightly controlled by military forces in an apparent attempt to prevent gatherings or a surge of people toward the capital.

In Sitra, resident Rania Ali said police were charging after Shiites even as they ran for shelter.

"I'm scared. I can't move from my house," said Ali, who is a Sunni married to a Shiite man. "I saw them chasing Shiites like they were hunting ... It is a cleansing war against our Shiite brothers."

Roadblocks around the country also prevented injured protesters from reaching the main state hospital, which was surrounded by security forces and medical staff were told they cannot leave. The Salmaniya complex has become a political hotspot -- with the mostly Shiite personnel seen by authorities as possible sympathizers of the protesters. The staff, however, claim it only seeks to live up to its responsibilities and treat all who need care.

But there have been moments of open anger. As overwhelmed teams treated the injured from Tuesday's clashes, many broke out in spontaneous calls to topple the monarchy.

For Bahrain's authorities, clearing Pearl Square would be more of a symbolic blow against protesters than a strategic victory. Opposition groups can still mobilize marches and take other actions against the leadership.

Bahrain's sectarian clash is increasingly viewed as an extension of the region's rivalries between the Gulf Arab leaders and Iran. Washington, too, is pulled deeply into the Bahrain's conflict because of its key naval base -- the Pentagon's main Gulf counterweight to Iran's growing military ambitions.

Iranian President Mahmoud Ahmadinejad on Wednesday denounced the Bahraini government's crackdown and the presence of the Saudi-led force.

"The people's demands for change must be respected. How is it possible to stop waves of humanity with military force?" Ahmadinejad said, according to Iranian state TV.

Iran has no direct political links with Bahrain's main Shiite groups, but Iranian hard-liners in the past have called the tiny island nation the "14th Province" of the Islamic Republic.

The Pentagon has authorized military families and civilians with non-emergency jobs to leave Bahrain.

In mostly Shiite southern Iraq, more than 4,000 people joined a march calling for the Arab League to halt attacks on Bahraini civilians. "Bahrain is the Gaza of the Gulf," some chanted in reference to past Israeli attacks on the Gaza Strip.