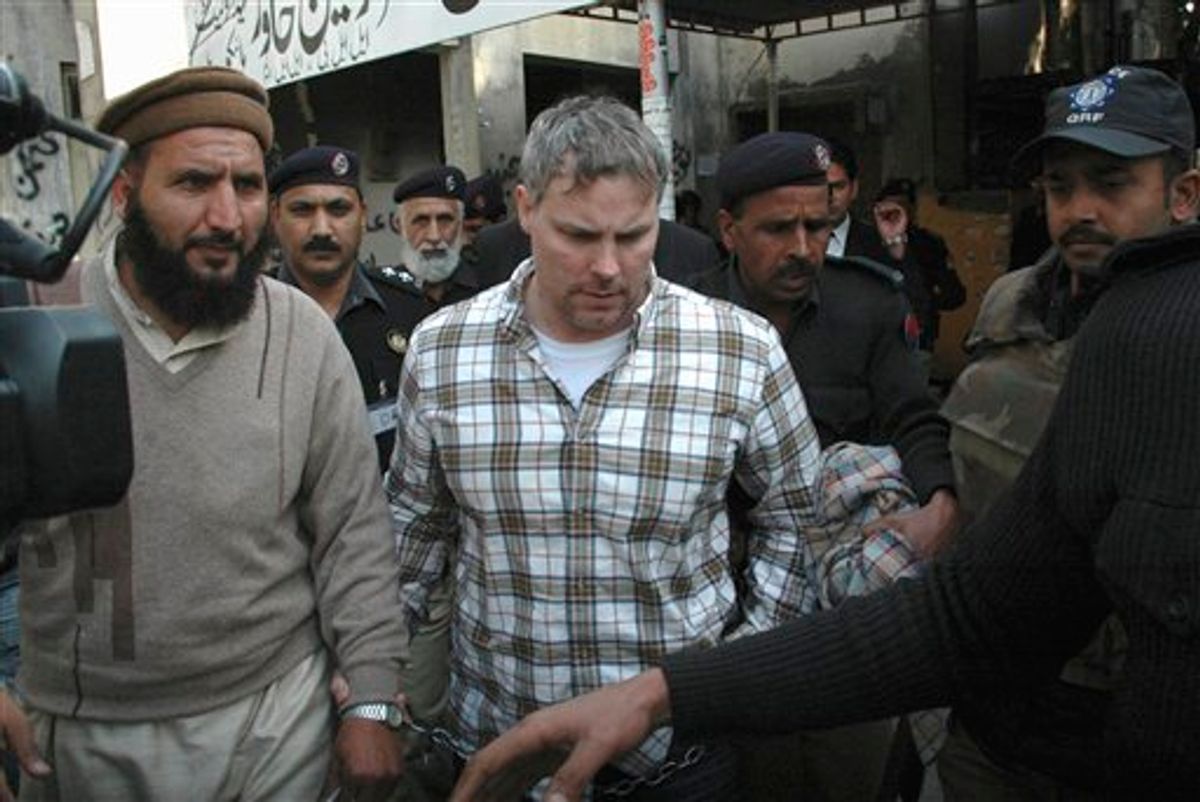 The clashes Wednesday in Lahore involved around 200 people. There were small protests in other main cities as well. Police made several arrests in Lahore and struck other people with batons, according to witnesses.

A CIA contractor who shot and killed two Pakistani men was freed from prison on Wednesday after the United States paid $2.34 million in "blood money" to the victims' families, Pakistani officials said, defusing a dispute that had strained ties between Washington and Islamabad.

In what appeared to be carefully choreographed end to the diplomatic crisis, the U.S. Embassy said the Justice Department had opened an investigation into the killings on Jan. 27 by Raymond Allen Davis. It thanked the families for "their generosity" in pardoning Davis, but did not mention any money changing hands.

The killings and detention of Davis triggered a fresh wave of anti-American sentiment in Pakistan and were testing an alliance seen as key to defeating al-Qaida and ending the war in Afghanistan.

Antagonism was especially sharp between the CIA and Pakistan's powerful Inter Services Intelligence, which says it did not know Davis was operating in the country. One ISI official said the agency had backed the "blood money" deal as way of soothing tensions.

Small groups of protesters took to the street in major cities after nightfall, briefly clashing with police outside the U.S. consulate in Lahore, where officers fired tear gas at men burning tires and hurling rocks. Some called for larger protests Friday after noon prayers.

Davis, a 36-year-old Virginia native, claimed he acted in self-defense when he killed the two men on the street in the eastern city of Lahore. The United States initially described him as either a U.S. consular or embassy official, but officials later acknowledged he was working for the CIA, confirming suspicions that had aired in the Pakistani media.

The United States had insisted Davis was covered by diplomatic immunity, but the weak government here, facing intense pressure from Islamist parties, sections of the media and the general public, did not say whether this was the case.

The payment of "blood money," sanctioned under Pakistani law, had been suggested as the best way to end the dispute.

Given the high stakes for both nations, few imagined either side would allow it to derail the relationship. The main question was how long it would take to reach a deal.

Punjab Law Minister Rana Sanaullah said Davis was charged with murder Wednesday in a court that was convened in a prison in Lahore, but was immediately pardoned by the families of the victims after the payment.

Reporters were not allowed to witness the proceedings.

"This all happened in court and everything was according to law," he said. "The court has acquitted Raymond Davis. Now he can go anywhere."

U.S. officials said Davis left the country soon after his release from jail.

Raja Muhammad Irshad, a laywer for the families, said 19 male and female relatives appeared in court to accept the $2.34 million. One Pakistani official said the sum was just under twice that, while other media outlets reported the amount was between $700,000 and $1.4 milion.

He said each told the court "they were ready to accept the blood money deal without pressure and would have no objection if the court acquitted Raymond Davis."

Representatives of the families had previously said they would refuse any money.

Asad Mansoor Butt, who had earlier represented the families, accused Pakistan's government of pressuring his former clients; he gave no details.

Some media reports said the some of the families had been given permission to live in the United States.

Irshad said that was not discussed in court.

The case dominated headlines and television shows in Pakistan, with pundits using it to whip up hatred against the already unpopular United States. While the case played out in court, many analysts said that the dispute was essentially one between the CIA and the ISA, and that they would need to resolve their differences before Davis could be freed.

Pasha demanded the U.S. identify "all the Ray Davises working in Pakistan, behind our backs," the official said.

He said Panetta agreed "in principle" to declare such employees, the official said, but would not confirm if the agency had done so.

A second ISI official said as a result of that conversation the ISI -- which along with the army is a major power center in the country -- then backed an effort to help negotiate the "blood money." The officials spoke on condition of anonymity because they are not allowed to give their names to the media.

CIA Spokesman George Little said the two agencies had had "a strong relationship for years."

"When issues arise, it is our standing practice to work through them. Thats the sign of a healthy partnership, one that is vital to both countries, especially as we face a common set of terrorist enemies," he said.

Davis' wife, Rebecca, outside her home in Highlands Ranch, Colorado, said she had heard of the release of her husband but did not have time to speak.