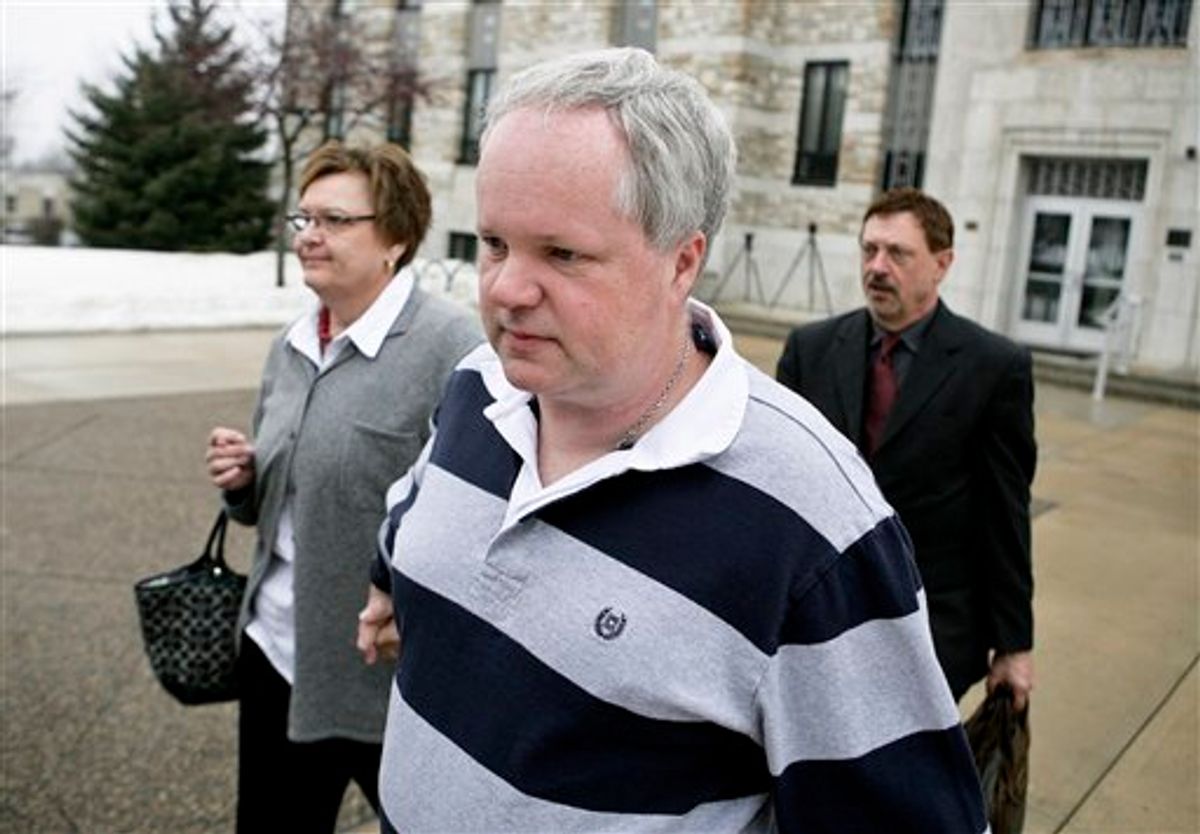 FILE - In this Feb. 17, 2011 file photo, William Melchert-Dinkel, center, leaves the Rice County Courthouse in Faribault, Minn., with his attorney Terry Watkins, right, and wife, Joyce Melchert-Dinkel, after waiving his right to a jury trial. Melchert-Dinkel, 48, of Faribault, was found guilty Tuesday, March 15, 2011 of aiding the suicides of 18-year-old Kajouji of Brampton, Ontario, who jumped into a river in 2008, and 32-year-old Mark Drybrough of Coventry, England, who hung himself in 2005. (AP Photo/Robb Long, File) (AP)
--

Freedom of speech is no defense for a former nurse who engaged in "lethal advocacy" when he encouraged an English man and Canadian woman to kill themselves after searching for depressed people over the Internet, a Minnesota judge said in delivering a guilty verdict against the man.

The judge found William Melchert-Dinkel, 48, guilty Tuesday of two counts of aiding the suicides of Mark Drybrough, 32, of Coventry, England, who hanged himself in 2005, and Nadia Kajouji, 18, of Brampton, Ontario, who jumped into a frozen river in 2008. Melchert-Dinkel declined a jury trial and left his fate to Rice County District Judge Thomas Neuville.

Melchert-Dinkel's attorney, Terry Watkins, said the defense was disappointed with the verdict and planned to appeal. Watkins said appellate courts will have to answer whether Melchert-Dinkel's actions rose to the level of a crime or were protected speech in the context in which they occurred, given the defense view that the victims were already predisposed to suicide and his online statements didn't sway them.

In his ruling, Neuville stuck mostly to a dispassionate recitation of the facts in the case. The judge again rejected the defendant's argument that his actions amounted to free speech, affirming a pretrial ruling he issued in November. He also reaffirmed his rejection of the defense claim that Melchert-Dinkel's online statements didn't sway the victims.

"Melchert-Dinkel was not merely expressing ideas about suicide The court finds that defendant's speech imminently incited the victims to commit suicide, and can be described as 'lethal advocacy,' which is analogous to the category of unprotected speech known as 'fighting words' and 'imminent incitement of lawlessness,'" Neuville wrote.

After sentencing, which is scheduled for May 4, Watkins said, his next stop will be the Minnesota Court of Appeals, and the defense is prepared to appeal to higher courts if necessary. He said the defense didn't dispute the facts as the judge laid them out in his 42-page ruling, but disagreed on whether they added up to proof of guilt beyond a reasonable doubt.

"We will carry this as far as judicially allowed," Watkins said.

Minnesota's rarely used aiding suicide law carries a maximum penalty of 15 years in prison and a $30,000 fine. Data from the Minnesota Sentencing Guidelines Commission show that since 1994, only six people have been sentenced on the charge. One was sent to prison for four years; the rest received local jail time, probation or both.

Rice County Attorney Paul Beaumaster said he would seek a sentence consistent with the earlier cases.

"I think justice was served," Beaumaster said. "I think it was a just verdict based on the facts of the case, and convictions were earned on both counts."

Prosecutors said Melchert-Dinkel, who lives in the southern Minnesota city of Faribault, was obsessed with suicide and hanging and sought out potential victims online. When he found them, prosecutors said, he posed as a female nurse, feigned compassion and offered step-by-step instructions on how they could kill themselves. Melchert-Dinkel told police he did it for the "thrill of the chase." He acknowledged participating in online chats about suicide with up to 20 people and entering into fake suicide pacts with about 10 people, five of whom he believed killed themselves.

Drybrough's mother, Elaine Drybrough, said she was glad the judge agreed Melchert-Dinkel was guilty. If he had been cleared, she said, it would have sent a signal to other people contemplating similar actions that encouraging suicides is permissible.

Kajouji's mother, Deborah Chevalier, said she's concerned the penalty won't be in line with the crime and that Melchert-Dinkel's appeal will delay a final resolution.

"I've said all along that a crime is just as vile and offensive whether it be committed in our own homes or over the Internet," she said in an e-mail.

During oral arguments in February, Watkins called his client's behavior "sick" and "abhorrent" but said it wasn't a crime. He said Drybrough had been ill for years and went online seeking drugs to overdose, while Kajouji was going through a rough time in her life, had a miscarriage after drinking heavily and was depressed. Watkins said they were both intelligent people who wouldn't be swayed by his client's online "babbling."

Beaumaster said Melchert-Dinkel's intent was to see them die, and the law is designed to protect vulnerable people.

"That's the point. That's who he looked for," he said. "He targeted individuals he knew he could have an influence on. Were they predisposed? Absolutely!"

Minnesota authorities began investigating in March 2008 when an anti-suicide activist in Britain claimed someone in the state was using the Internet to manipulate people into killing themselves.

The Minnesota Board of Nursing revoked Melchert-Dinkel's license in 2009.