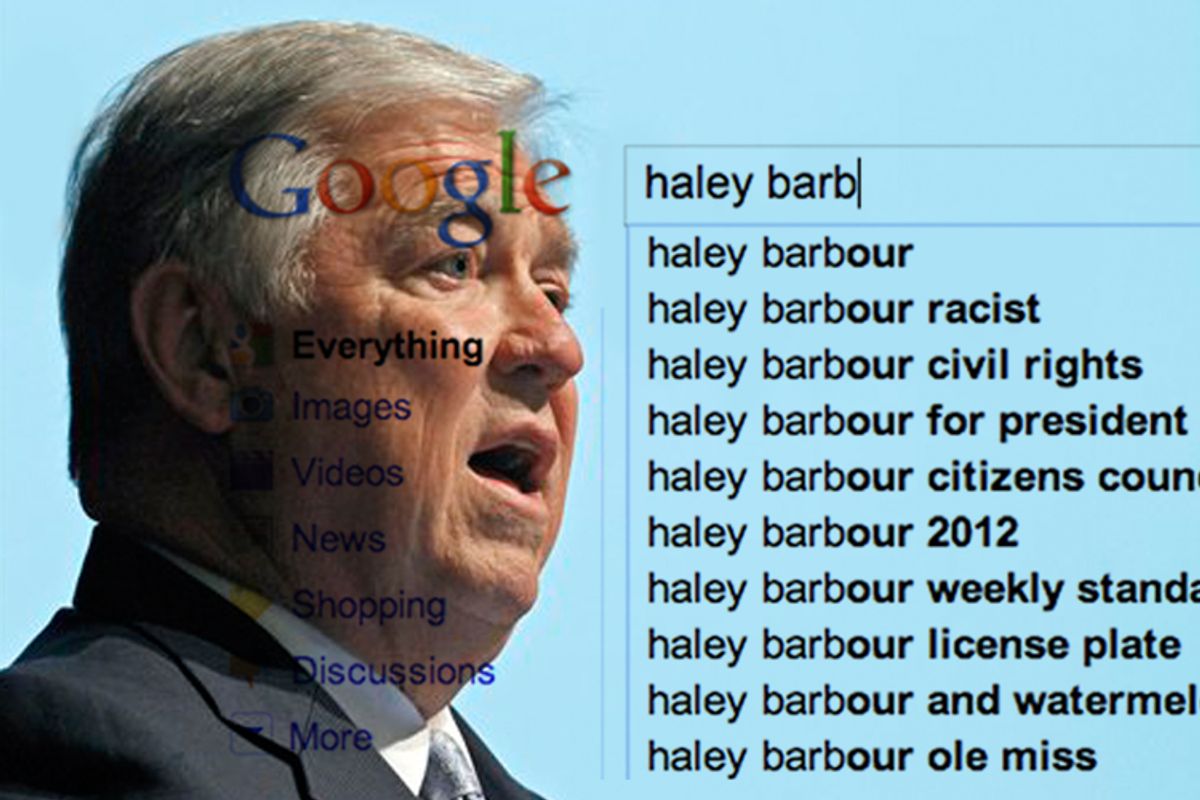 It looks like Rick Santorum is not the only presidential candidate with a Google Problem.

This is what Google's autocomplete algorithm generates if you start typing Haley Barbour's name into the search engine: A whopping seven of the nine results center on race-related flaps that Barbour has been involved in over the years. Google's autocomplete feature draws on factors including the popularity of search terms. To explain what each of these searches refers to:

Haley Barbour racist: This one is self-explanatory

Haley Barbour citizens council: This is a reference to comments made by Barbour to a reporter last year praising the White Citizens Councils of the 1950s and 1960s. In Barbour's account of his hometown of Yazoo City, they were actually a check on the KKK. Critics quickly pointed out that the groups were formed to push an ugly white supremacist platform, and Barbour had to issue a clarification.

Haley Barbour weekly standard: The magazine that published the profile in which Barbour made the damaging comments above.

Haley Barbour license plate: Last month, Barbour was asked at a press conference about the proposal by a Confederate group to issue a state license plate commemorating Confederate hero and KKK leader Nathan Bedford Forrest. He responded: "I don't go around denouncing people. That's not going to happen." After another outcry, he subsequently promised he would veto the effort if it passed the Legislature.

Haley Barbour and watermelon: This refers to a recently resurfaced New York Times article from 1982 that reported:

But the racial sensitivity at Barbour headquarters was suggested by an exchange between the candidate and an aide who complained that there would be ''coons'' at a campaign stop at the state fair. Embarrassed that a reporter heard this, Mr. Barbour warned that if the aide persisted in racist remarks, he would be reincarnated as a watermelon and placed at the mercy of blacks.

Haley Barbour ole miss: This is Barbour's alma mater. But it most likely refers to an embarrassing story from 2010 in which Barbour claimed that he was friends with the first black woman to attend the university, Verna Bailey. Except when reporters called Bailey, she had no idea she had ever met Barbour. And while he recalled those years as "a very pleasant experience," Bailey said white people hardly interacted with her at all.

To sum up, this Google situation is something of a P.R. disaster for Barbour. And, especially since Google's algorithms are secret, it's hard to know how he can fight it.

(Hat tip to Elon Green for the catch.)