Another week, another temporary deal to keep the government going. Do we even know who is winning this fight? 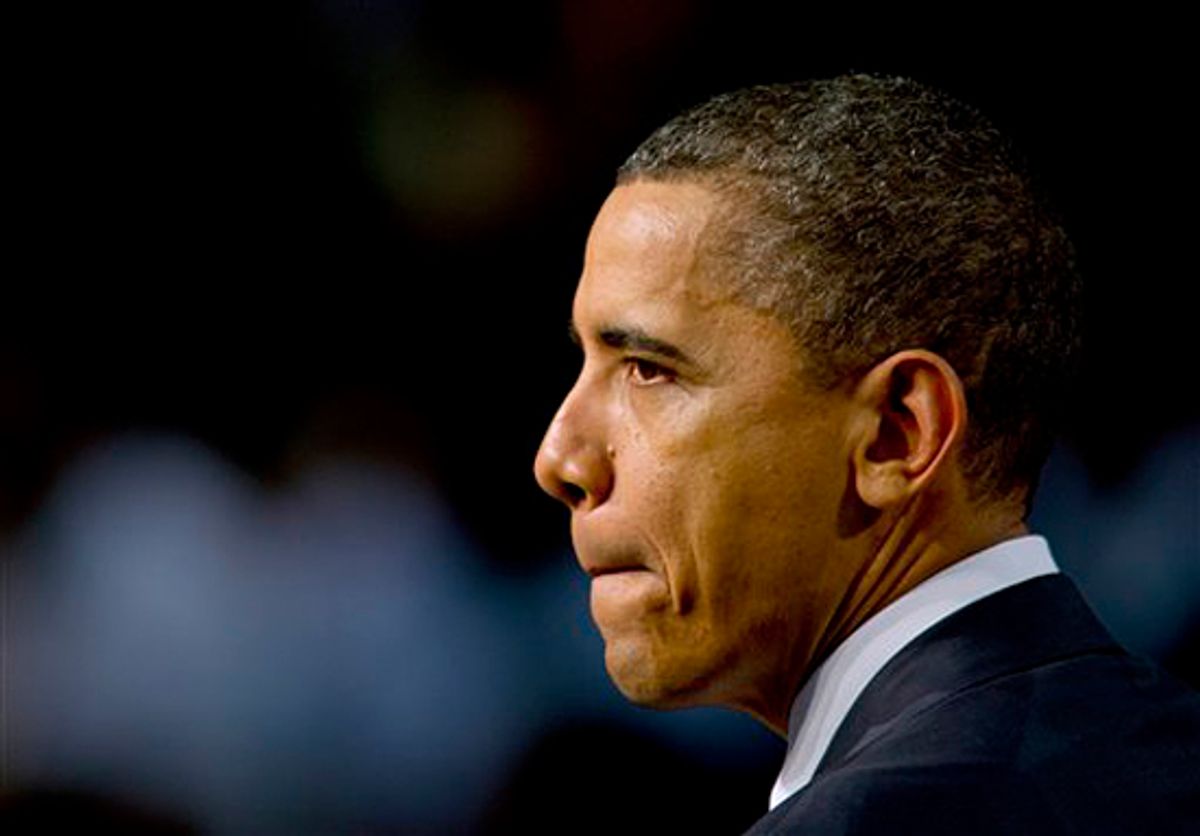 Stop me if you've read this before. On Tuesday, the House of Representatives approved a stopgap set of budget cuts that would keep the government operating beyond an imminent deadline. Senate Democrats signaled that they could live with the cuts, paving the way for the president to sign the spending bill into law later this week. As for Obama, he once again baffled his supporters and provided his opponents with plenty of ammunition for attack by saying nothing remotely newsworthy about the ongoing budget negotiations.

Didn't all this happen already, a mere two weeks ago? Sure, there are some minor new developments. This week's spending bill will keep the government going for three weeks, instead of two, and the budget cuts add up to $6 million, instead of $4 million. But the substance of the cuts is remarkably similar to the first batch: Nearly everything had already been requested by the White House, or consisted of funds that ended up not being spent in previous budgets, or were earmarks that both parties supposedly now oppose. I'm beginning to think that these people aren't quite clear on what the words "budget showdown" actually mean.

Some questions jump to mind. What exactly was the point of this rerun? Who is winning this fight? And is a potential government shutdown more or less likely as a result of Tuesday's events?

Opinions differ! Grover "starve-the-beast" Norquist, the GOP strategist who has made crippling the federal government his life work, is delighted at how the process is playing out. The GOP has pledged to cut $61 billion from this year's budget, and if they keep progressing at the current $2-billion-a-week rate, they'll get there. In this scenario, Senate Democrats and the White House are willingly allowing themselves to get nibbled to death, forced to agree to whatever deal the House offers in order to keep the government going another couple of weeks. And every day that President Obama doesn't come down from Mount Olympus and start knocking heads together offers another opportunity to attack him for "a lack of leadership."

But there's another way to look at how this is playing out. Only six Republicans voted against the spending bill passed by the House two weeks ago. This Tuesday, 54 House GOPers jumped ship, with many of them citing their disappointment at the fact that the bill didn't include any of their socially conservative objectives -- like defunding Planned Parenthood or healthcare reform. The result, as Politico pointed out, is that Speaker of the House John Boehner had to count on Democrats to help pass the bill, which is "exactly the situation Republicans had hoped to avoid since it makes them beholden to the minority as they try to shape a final budget deal with the White House."

So -- Democrats haven't given up anything that they weren't already prepared to sacrifice, while Republican unity appears to be cracking. Democrats can now claim that they have been perfectly reasonable, agreeing readily, on more than one occasion, to cuts proposed by Republicans in order to keep the government running. Meanwhile Republicans have to deal with a growing faction who seem to be getting angrier with each compromise.

Worst of all for Republicans, reports The Hill, a new poll suggests that voters currently appear to trust Obama more than they do Republicans on economic and budget issues.

A new ABC News/Washington Post poll out Tuesday indicates ... in January, 42 percent of independents preferred the Republicans in Congress over Obama to handle the economy. Today just 29 percent say the same.

Here's a guess -- those numbers are going to continue to head in the same Obama-friendly direction as the public realizes that Democrats agreed to compromise again this week while a significant number of House Republicans voted against a deal that the leadership of both parties support. When push finally does come to shove -- a point that still seems inevitable, since there is clearly a limit to how much more can be cut without targeting programs that the White House and Senate Democrats have pledged to defend -- Republicans might find themselves just a little boxed in. They will be asking for the cuts that are politically the most difficult to negotiate, at the end of the process. If House Republicans threaten to shut down the government if they don't get their way on Planned Parenthood, they stand a pretty good chance of looking like dogmatic idiots.

It's probably too much to imagine that this was the White House's strategy all along. But as has been noted many times before, the current White House team is stocked with veterans from the last big budget showdown, so it is at least possible that they know what they are doing. Whatever the case, the reality on the ground is this: We have another three weeks of breathing room before the next deadline, and core White House priorities remain intact. Meanwhile, from Wisconsin to Michigan to Ohio to Florida, Republican governors are giving overzealous budget-cutting a very bad reputation. The longer that plays out, the stronger the White House position becomes.