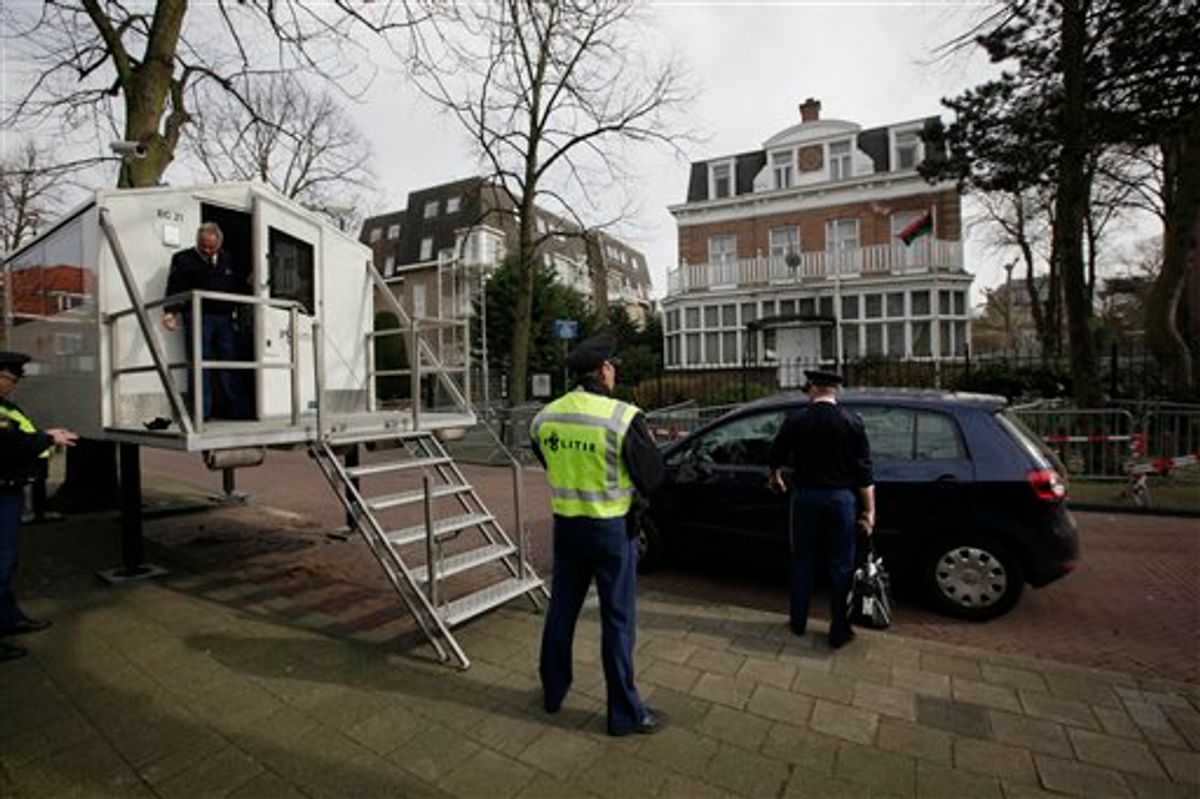 Dutch police change guard duty as a pre-Gadhafi flag, chosen by forces fighting against Moammar Gadhafi, outside right window on first floor, flies outside the Libyan consulate in The Hague, Netherlands, Wednesday March 9, 2011. The International Criminal Court, based in The Hague, recently presented an overview of the alleged crimes committed in Libya since Feb. 15 2011. (AP Photo/Peter Dejong) (AP)
--

Police said Wednesday they have smashed a huge international pedophile ring, rescuing 230 children from abuse and arresting 184 suspects -- including teachers and police officers.

The ring was centered on an Amsterdam-based online forum called boylover.net, which Wainwright described as "probably the largest online pedophile network in the world."

"These are very serious crimes on a truly global basis," he added.

The heavily encrypted forum, whose administrator appeared in a Dutch court on Tuesday charged with sex offenses, had up to 70,000 members.

The investigation was led by Britain's Child Exploitation and Online Protection Center but also involved law enforcement agencies as far afield as Australia, the United States and Thailand.

Peter Davies of the British child protection center said there would be more arrests as the investigations continue.

"Those who have been members of the site can expect a knock on the door in the very near future," he said. In Britain, police said, the children involved were ages 7 to 14.

Wainwright said the website was intended as a discussion forum where pedophiles could "share their sexual interest in young boys."

Europol released parts of online conversations and other posts including a discussion between two suspects, identified only as X and Y, about their attraction to boys wearing diapers.

Y said he had convinced one boy he needed to wear a diaper every weekend from the age of nine to 13. "They were the happiest four years of my life," he said.

After making initial contact on the forum, members would use e-mail and other electronic channels to share images and video of children being abused, Wainwright said.

While the forum did not include child pornography, "computers seized from those arrested have harvested huge quantities of child abuse images and videos," Europol said in a statement.

The majority of the 184 people arrested so far are suspected of direct involvement in sexually abusing children, They include teachers, police officers and scout leaders. One Spaniard who worked at summer youth camps is suspected of abusing some 100 children over five years.

"What we have shown today is that while these offenders felt anonymous in some way because they were using the Internet to communicate, the technology was actually being used against them," Davies said. "Everything they did online, everyone they talked to or anything they shared could be, and was, tracked by following the digital footprint."

Australian Federal Police commander Grant Edwards said suspects arrested in Australia ranged in age from 19 to 84 and used the Internet to "prey on children with anonymity, with subterfuge and with camouflage."

He said the oldest suspect identified by Australian authorities was an 84-year-old man living in Thailand who is suspected of abusing children.

Children, Edwards said, "should be able to use the Internet safely, without fear of being approached or groomed by these online predators."