Right-wing pundits show how not to react to a catastrophe

Glenn Beck, Bill O'Reilly and Rush Limbaugh all said awful things about Japan. Will this be a teaching moment? 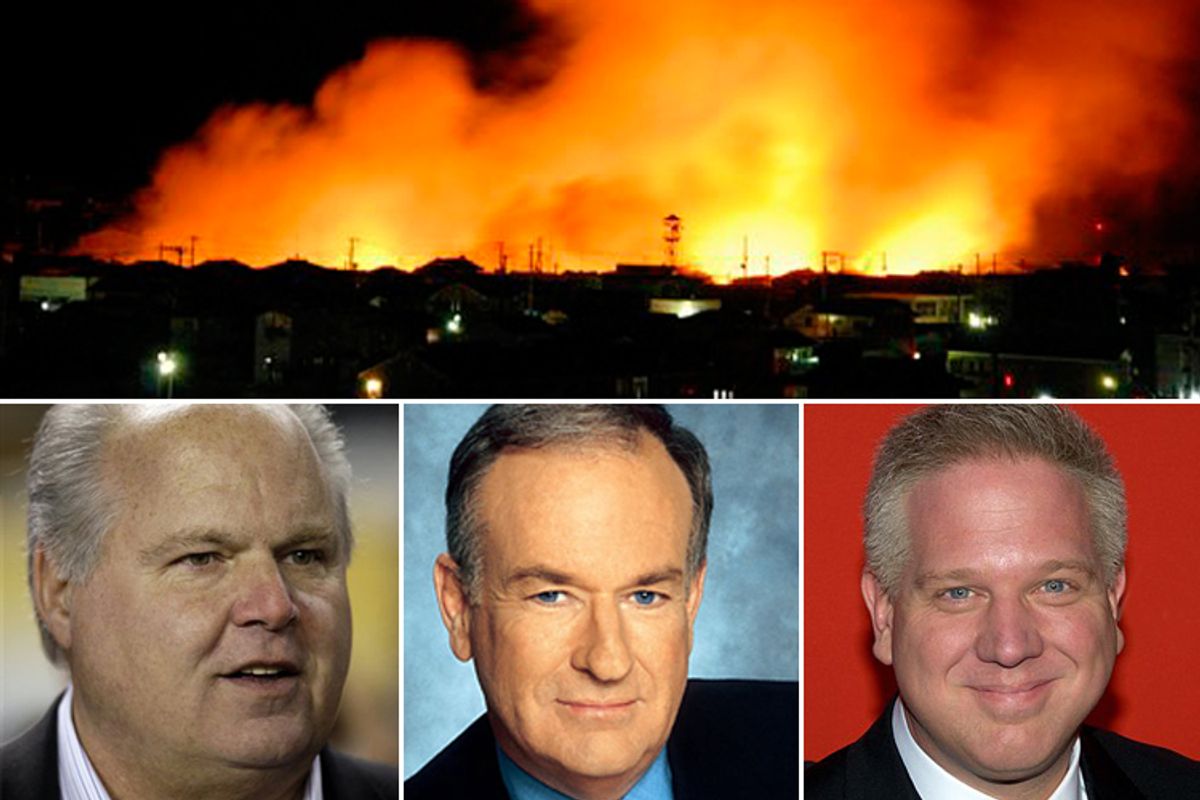 The nuclear crisis in Japan has most of the news-viewing population anxiously enthralled and deeply concerned for the well-being of the Japanese people. Network news anchors, for the most part, have responded to the catastrophe with even-keeled and sober-faced reporting and commentary. With such an overwhelming demand for coverage, pundits struggle to find a fresh angle, and some have come off sounding downright disdainful. A small collection of right-wing pundits have put on a master class these past few days in saying precisely the wrong thing during an international disaster.

One of those voices was Rush Limbaugh, who mocked displaced Japanese people in a Diane Sawyer report because they were recycling, and thinks it's funny that such a cataclysmic natural disaster has struck such an environmentally conscious country:

Glenn Beck, of course, drew heated criticism for insinuating on his radio show that divine intervention caused the Japanese earthquake and tsunami:

That was on Monday afternoon, but Beck wasn't finished pontificating about Japan. In this next video, he begins by insisting that everything is fine at the Fukushima Daiichi power plant and cites a much-buzzed-about blog post penned by an MIT researcher. (Which Salon's Justin Elliott thoroughly debunked yesterday.) Then, Beck endeavors to illustrate how a meltdown would occur -- using M&M's.

Finally, there was Bill O'Reilly. During the Talking Point segment of his show last night, the Fox News host acknowledged that the situation in Japan was serious, but argued that it wasn't nearly as bad as the media is making it out to be. O'Reilly's rationale sounds patronizing as he expounds on Japan's cultural regard for "cooperation and obedience to authority."