Hope for missing fades in Japan

Emphasis shifts from evacuation to recovery but little hope for finding loved ones, especially the elderly, remains 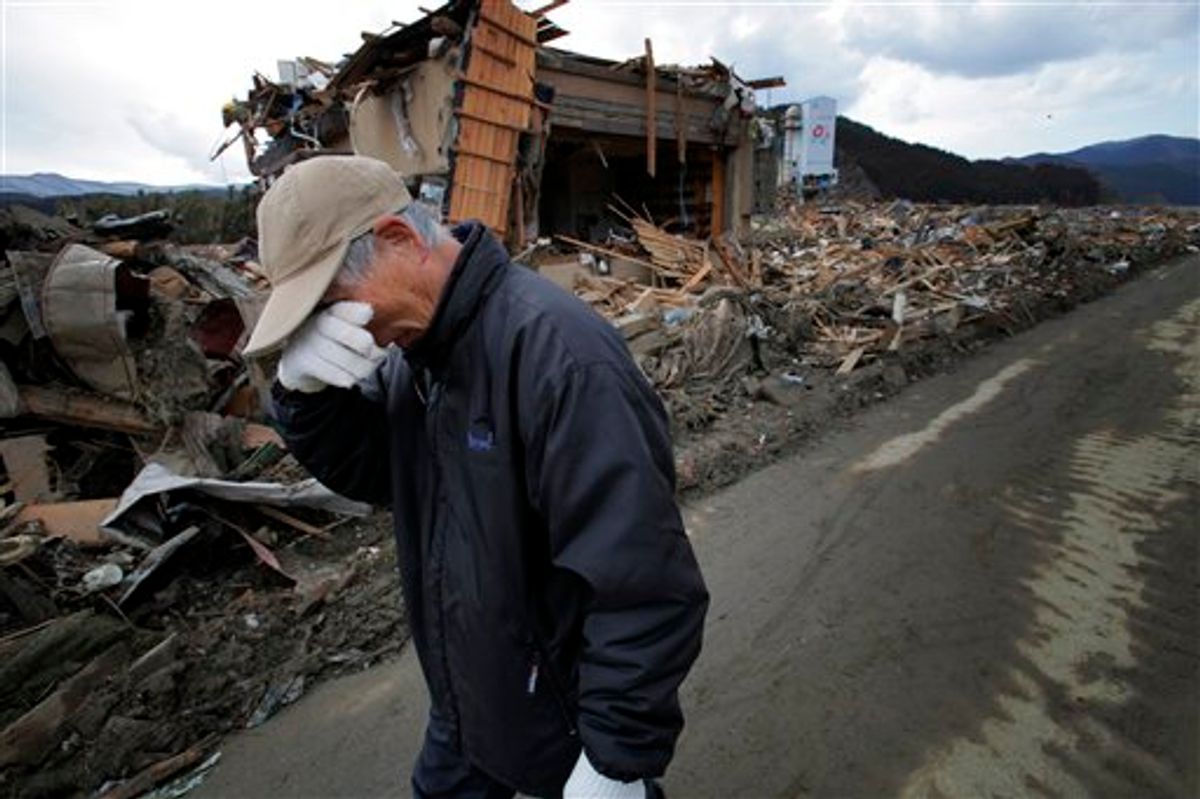 The elderly couple fled their home on foot as the warning sirens blared. But they could not keep up with their neighbors and fell behind as the tsunami rushed in.

Nearly a week later, 71-year-old Taeko Kanno and her husband are still missing.

"I think there is no hope," said Katsuo Maiya, Kanno's brother-in-law. "I can't find them. The only thing I can do is wait until the military collects their bodies."

As retrieving bodies increasingly becomes the focus of rescue crews in Japan's northeast, it's clear that Friday's earthquake and tsunami -- believed to have killed more than 10,000 -- took their heaviest toll on the elderly in this rapidly aging nation, where nearly one in four people is over 65.

Many, unable to flee, perished. Survivors lost their daily medicines. Hospitals lost power and water. Sometimes, the consequences have been fatal.

Friday's twin disasters also crippled a nuclear power plant in the northeast, adding to the region's woes. Fourteen older patients died after being moved to a temporary shelter in a school gym because their hospital was in the evacuation zone near the overheating plant.

Two of the patients died in transit Monday and 12 more at the gym, said Chuei Inamura, a Fukushima government official. It took until Thursday to get all the remaining patients into other hospitals.

"We feel very helpless and very sorry for them," Inamura said. "The condition at the gymnasium was horrible. No running water, no medicine and very, very little food. We simply did not have the means to provide good care."

"We have no more tasks," said Pete Stevenson, a firefighter heading Britain's 70-strong team. "The Japanese government have told us they are now moving from search and rescue to the recovery phase."

He insisted their departure wasn't related to any fears of radiation from the troubled Fukushima nuclear plant, which lies about 90 miles (150 kilometers) south.

Japan's relatively large elderly population presents a particular challenge for rescue and relief in what is already a disaster of epic proportions.

About 23 percent of Japan's 127 million people are age 65 or over, nearly double the proportion in the United States.

Japan's rural areas have been in decline for years, and many of the small coastal towns hit hardest by the tsunami had seen an exodus of young people moving to cities for work.

Now the low-lying parts of those towns have been flattened, and as much as half the population in some may have been killed. The official death toll climbed over 5,300 Thursday and is expected to top 10,000.

Kanno, the woman who couldn't keep up with her neighbors, comes from one such town -- Rikuzentakata, a port city that was home to 20,000 before the disaster.

When the tsunami surged into Rikuzentakata, her 67-year-old sister Masako Maiya rushed down from her home in the hills with her husband, Katsuo.

They only got as far as a bridge. Down below, they saw the town had become a muddy inland sea.

One of Kanno's neighbors told them she saw Kanno and her husband flee, but the couple was slow and had lagged behind.

For five days, the Maiyas went from morgue to morgue, looking for the Kannos' bodies. On Thursday, they decided to visit the site where their home stood.

"The house should be around here," Masako Maiya said, stopping in front of a pile of splintered wood and mud.

A pained moan escaped from her husband's mouth. "There's nothing," he said, taking off his glasses and wiping tears from his eyes. His wife began to sob too. Still crying, they turned and walked away.

In the town of Kamaishi, American and British rescue teams completed their final sweeps, and Japanese mechanical diggers began the task of clearing collapsed homes, offices and stores.

Crews found more than a dozen bodies, some trapped underneath homes flipped on their roofs, another at the wheel of his overturned car. In three days of searching the battered coast, they found no survivors.

"There are probably dozens of bodies we just can't reach," said Heather Heath, a 38-year old British firefighter. "The water can force people under floorboards and into gaps we can't search. It's such a powerful force."

For survivors, in a still-wintry climate, the battle is to keep the elderly healthy and alive.

A hospital in Tagajo was cleaning off muddy medicine Thursday and trying to keep its 90 patients alive without water or electricity. A large generator and two portable toilets were delivered by the Japanese military.

"We've been told we'll get medicine sometime next week," said Daisuke Toraiwa, a physical therapist at the hospital.

The tsunami killed 47 of the 113 residents at a retirement home in the city of Kesennuma. Those who could escaped to the second floor. But many got wet, and 11 more died over the next two days because of the cold, said owner Morimitsu Inawashida.

Today, the 53 survivors live in a basketball gym, some sitting in wheelchairs with thick blankets wrapped around them. A nurse from a nearby hospital checks their blood pressure. With snow falling outside, kerosene heaters help keep them warm, but Inawashida said the fuel is running out.

"They are alone and under high stress," he said.

At a school turned shelter in the same city, a group of older men and women sat in the large drafty gym, warmed only be a single kerosene heater. A few ointment tubes, bandages and boxes of aspirin and stomach and cold medicines were stacked on a nearby table.

"It's freezing, there are people who are sick and injured," Keiko Endo, a 58-year-old nurse at the shelter, said. "People are mostly putting up with whatever's wrong. We're trying to comfort and help them, but we can't do too much."

Doctors Without Borders, the international assistance group, has seen cases of hypothermia, serious dehydration and respiratory diseases in some shelters, said Eric Ouannes, general director of the group's Japan affiliate. The tsunami washed away many people's medications.

"Some don't remember what they were taking, how much, and what was the exact prescription," he said. "So that makes things a little more complicated."

Despite the hardships, many survivors take heart in the cameraderie of sharing a common fate.

"If everyone's got nothing, everyone's got the same," Isao Nagai, 62, said, standing in a cold junior high school gym in Ofunato. About 150 survivors huddled under blankets. Some dozed, others talked or read the newspaper. "There's a comfort we get from each other. It's simple. We've all got nothing. Not half or some. Nothing."

Kinuyo Kojima, whose house in Ofunato was washed away, agreed.

But, the 65-year-old woman said, "We live like animals." The stench of backed-up toilets has made some retch, and they complain of constipation from the diet of rice and little or nothing else.

"You should have seen us when we got a piece of chicken yesterday," Kojima said Thursday. "We were so excited over a tiny piece of meat. It had been so long."

Mineko Ohira, a 63-year-old nursery school teacher in Ofunato, worries about the elderly, and what will happen when they have to leave the shelters and find themselves bereft of friends, family and homes.

"The country should find a way to help support them," she said.