"Paul": Kick it with the chillaxed alien, bro 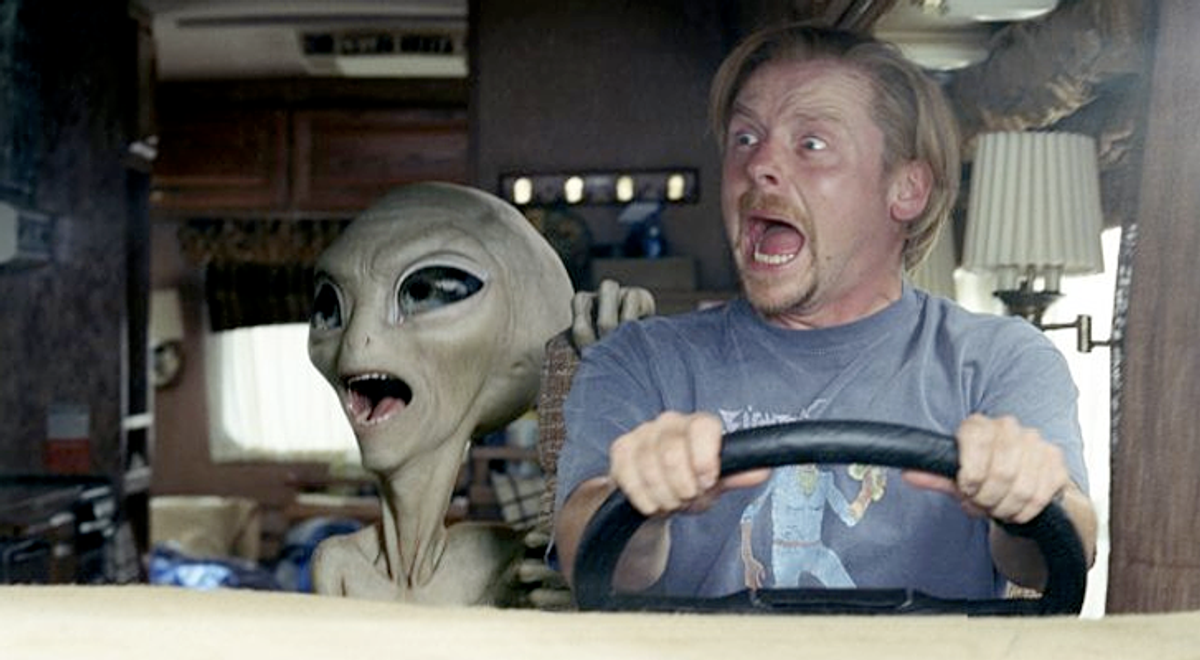 There must be something interesting to say about "Paul," a low-wattage farce about a weed-smoking alien and his dudely adventures on Earth that stars (and was written by) the British comedy team of Simon Pegg and Nick Frost, creators of "Hot Fuzz" and "Shaun of the Dead." But I'm damned if I know what that would be. "Paul" is unobjectionable enough while you're sitting there; as a friend of mine used to say about attending poetry readings, it's better than some TV. But not that much TV. You get the feeling that Pegg and Frost got together with director Greg Mottola ("Adventureland," "Superbad"), scribbled some half-baked ideas on a napkin -- "S&N as nerds, at ComicCon! Genius! Alien = Just a Guy!!! Capt. Kirk vs. the Gorn! Area 51! Rednecks, crazy Christians, gun nuts, 1-eyed chicks, etc.!" -- and started shooting the movie as soon as the bong hits had worn off. Or possibly sooner than that.

All three of those guys have made genuinely funny stuff in the past, and I'm particularly a fan of Mottola, who is something like the smarter, more grown-up Judd Apatow (which explains why he's not rich and powerful). In their better moments, Pegg and Frost have an easygoing Laurel-and-Hardy magic about them, but there's simply no cure for the fundamental laziness behind "Paul," which amounts to a recycling program for tired gags about nerds, gays, nervous-nelly Brits, dumbass Yanks and little green men. There's also no way to vaccinate against its near-fatal dose of Seth Rogen, who voices the eponymous alien -- who's been kept under wraps by the government for 50-odd years -- as a chillaxed frat-boy type in ass-hanger shorts, reasonably good company but grating in large doses, and not as smart or funny as he thinks he is. One can only suppose that this movie was in production around the same time as "The Green Hornet," which probably short-circuited Rogen's plans for big-screen world domination.

"Paul" operates on one idea and about 35 percent of a second one: When aspiring English comic-book author Clive (Frost) and his illustrator sidekick Graeme (Pegg) stumble upon Paul in the Nevada desert near the secret base long known as Area 51, they find a guy who's completely adjusted to life on Earth, American-style, but who looks exactly like the stereotypical gray-green half-pint with an oversize head and huge, upward-tilted eyes. That's because, Paul explains, he's been covertly influencing pop culture ever since he crash-landed in a Nebraska cornfield in 19-whatever. We hear Paul teleconference with Steven Spielberg (playing himself, in voice-over) and witness him resuscitate a dead starling with surprising results, and those moments are pretty funny, but the hit-to-miss gag ratio is atrocious, and we spend most of the movie hanging out with these borderline-agreeable characters, waiting for something to happen.

OK, since you insist: Graeme and Clive's RV is pursued by an amped-up government agent (Jason Bateman) and his two buffoonish subordinates (Bill Hader and Joe Lo Truglio), and along the way our fugitive trio picks up the always-enjoyable Kristen Wiig, playing a one-eyed Christian girl eager to learn how to cuss and fornicate like a proper American. There is a cameo by Sigourney Weaver, for no discernible reason. The fact that we want very much to like Pegg and Frost and Wiig, and that the movie's execution ranges from indifferent to not-bad, doesn't make up for the fact that they're playing second-rate caricatures in a late-night improv sketch that goes on far too long.