Remember the man who put his face on those New York video billboards via transmitter? It was an ad for "Limitless" 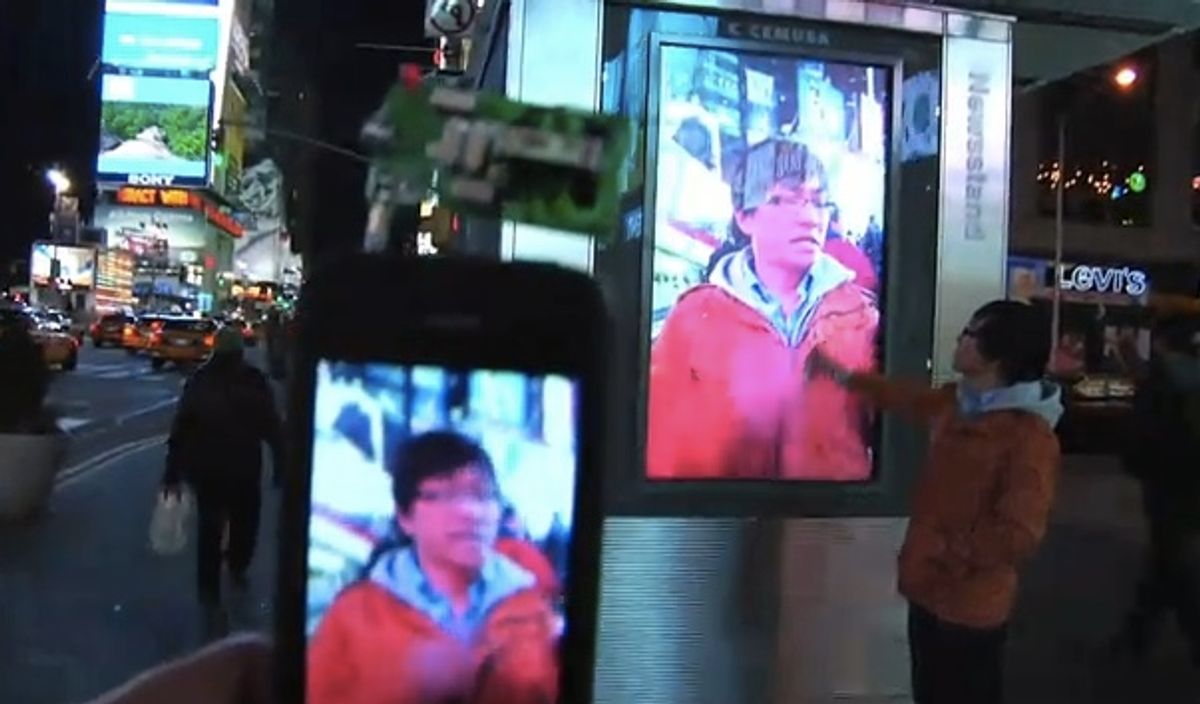 On Monday, a YouTube clip surfaced showing a man hacking into the video billboards in Time Square and putting himself on the screens, using only his cell phone, a "transmitter," and a red balloon. We determined the video was a hoax, since those digital ads go through a computer system that would require access codes, and wouldn't simply play images that had been "transmitted" to them through an outside source.

Now the truth is out: the video was a viral ad for the movie "Limitless" starring Bradley Cooper. A new clip was uploaded by the same user yesterday, with the following description of his stunt:

"Here is how I did: I took NZT. It's a pill that allows me to use 100% of my brain. It enabled me to create this revolutionary transmitter & repeater. One pill a day and you are limitless :)"

NZT is the drug featured in the Bradley Cooper movie "Limitless," about a man able to use 100 percent of his brain after taking a pill. But how were viewers supposed to associate the original video (which didn't mention NZT but did show a shot of a video billboard for "Limitless" getting hacked) together with the film?

In a New York Times article today, the men behind the ad were revealed to be James Percelay and Michael Krivicka, employees of the viral video agency called Thinkmodo. They don't believe in things like "frontal assaults," otherwise known as "showing people the product you are selling":

“You are getting your message across, but it’s tangential; it’s not a direct frontal assault,” said Mr. Adee, adding that the do-it-yourself look and feel of the video is also an important element. “You don’t have to make it perfect; if anything, that would hurt it. It has to feel organic. It has to feel original.”

“We’re pushing the engagement of an idea which leads you then to the product,” he said. “It just is a whole new mind-set where you don’t have to wrap everything up in a bow and if you don’t, people are going to be a lot more interested in you and what you’re selling and what your message is.”

And as a tipster pointed out, we were wrong about how the stunt was pulled off: it wasn't edited in post-production, but rather the team rented out the screens to loop images which would intermittently sync with the iPhone's.

"The actor was familiar with the timing of the 'hacks,'” said Thinkmodo founder Michael Krivicka, "We did hundreds of takes on each screen.”

Clever trick, but one that shows how fundamentally annoying viral advertisement can be. When you have to do extra research to find out what some company is trying to sell you, it takes some of the fun out of well, being sold to. Yes, ads can be in your face and obnoxious, but I don't want to waste my time hunting down clues about why orange bikes are suddenly popping up all over the city, only to have find out it's a weird DKNY ad for Fashion Week.