Japanese fend for themselves as aid slowly trickles in

Even as they mourn the loss of loved ones, the Japanese people show resilience in the recovery effort 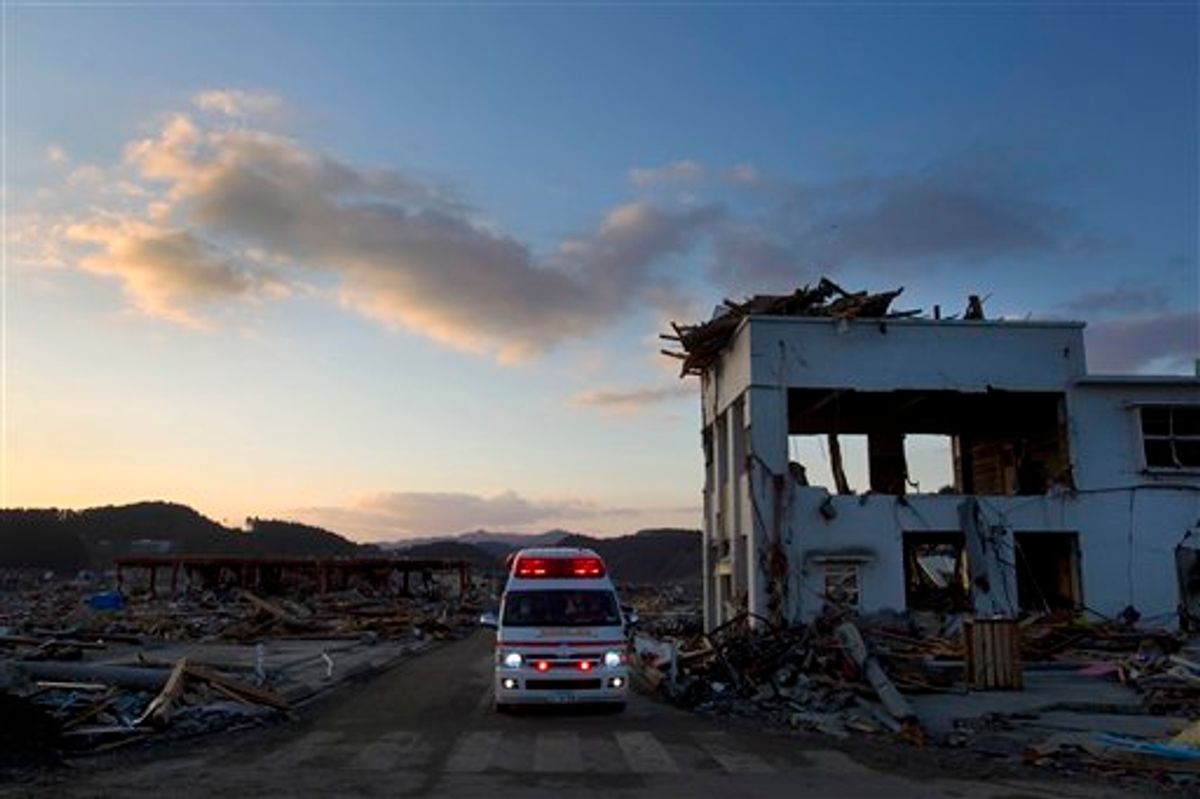 There may be no water, no power and no cell phone reception in this tsunami-struck town, but in the school that serves as a shelter, there are sizzling pans of fat, pink shrimp.

Relief supplies have only trickled into the long strip of northeast Japan demolished by a powerful earthquake and the wave it unleashed a week ago, leaving affected communities to fend for themselves.

Many have risen to the occasion.

No water for the toilets? No problem. Students in Karakuwa bring buckets of water from the school swimming pool to give survivors the dignity of a proper flush. In the kitchen, a giant rice cooker given to the school by a resident sits on a table, steam rising from the heaping mounds of rice inside.

"For a long time, in the countryside, even if you didn't have enough for yourself, you shared with others," said Noriko Sasaki, 63, as she sat on the ground outside another relief center in the town. "That is our culture. Even if they're not relatives, we feel as if they're sisters or brothers."

There are hardships -- a junior high hardly offers the comforts of home -- and while the sense of community runs all along the coast, not all survivors are as well off.

Blustery snow, fuel shortages and widespread damage to airports, roads and rails have hampered delivery of badly needed assistance to more than 450,000 homeless trying to stay fed and warm, often without electricity and running water in shelters cobbled together in schools and other public buildings.

More than 6,900 people are confirmed dead so far and another 10,700 are missing. The disaster also damaged a seaside nuclear power plant, which remains in crisis as workers struggle under dangerous conditions to prevent a meltdown and major radiation leaks.

In the flattened hamlet of Shizugawa, Koji Sato, a carpenter who usually builds homes, is making coffins.

He said he hasn't had time to really think about the hardship he's faced. "All I have been doing is making coffins."

In Hirota, helicopters have delivered some food, but not much. So far, the survivors have instant noodles, fruit and bread. Water comes from wells and mountain rivers. Companies and residents unaffected by the disaster have donated bedding and blankets.

"People here aren't angry or frustrated yet. ... But it's a big question mark whether we can keep living like this for weeks or months," said Sasaki, who is not related to Noriko. "I try to concentrate on what I need to do this morning, this day, and not think about how long it might last."

With roads and airport runways being cleared of debris, aid workers hope to ramp up relief soon.

Helicopters operating from two U.S. aircraft carriers off the coast of Japan are already ferrying in supplies.

Two American helicopters touched down on a hilltop above Shizugawa on Friday with boxes of canned beans and powdered milk for a community center that has become a shelter for those who lost their homes.

But snow has limited helicopter flights, and American aircraft are also under orders to skirt the area around the nuclear plant to reduce the risk of radiation exposure.

The region can expect some relief in about 24 hours in the way of warmer weather replacing bitter cold and snow, said Herbert Puempel of the U.N.'s World Meteorological Organization in Geneva. He said temperatures should climb enough to "take a little pressure off the people who are not housed."

"It's frustrating," said U.S. Navy rescue swimmer Jeff Pearson, 25, of Amarillo, Texas. "But we're doing all we can do. I think we are going to be able to get much more involved very soon."

His helicopter crew, based on the southern island of Okinawa, was heading farther north from Japan's Jinmachi Air Base in Yamagata city.

A 24-vehicle U.S. Marines convoy reached the base Friday, where the Marines will run a refueling hub, move supplies by road and provide communications support.

Also Friday, the airport in Sendai, the city closest to the epicenter, was declared ready to receive aid deliveries on jumbo C-130 and C-17 military transport planes. The tsunami had flooded the tarmac, piling up small planes and cars and leaving behind a layer of muck and debris.

At the school in Karakuwa, 43-year-old Emi Yoshida reads a book, still wearing the same clothes she had on the day the tsunami roared into town. She has not showered in a week and longs for a bed. Still, she is grateful for the comfort the community has provided her and her two sons.

Nearby, 62-year-old Yoko Komatsu and her 88-year-old father-in-law Tetsuo Komatsu sit in a patch of sunlight streaming in through the giant classroom windows, warming themselves next to an oil-powered heater.

Yoko feels trapped by the one thing the volunteers cannot give her: a way to communicate with the outside world. She has no idea if her relatives, who live in other hard-hit coastal towns, are alive.

In the kitchen, teachers, mothers of students and the newly homeless whip up three meals and two snacks a day.

The women mix together squid, shrimp and stir-fried vegetables in large pots, turning it into a nourishing stew that they ladle onto bowls of rice. They're delivered with slices of apples throughout the building.

In the middle of one classroom, a group of boys plunk themselves in seats around a table, the bowls of stew sending plumes of steam into the air. In unison, they bow their heads.

"Thank you," they say. "For everything."

Then, their chilled hands armed with chopsticks, they gobble their dinner down.