NYT: The "cozy relationship" between Japanese reporters and government officials leads to suppression of facts 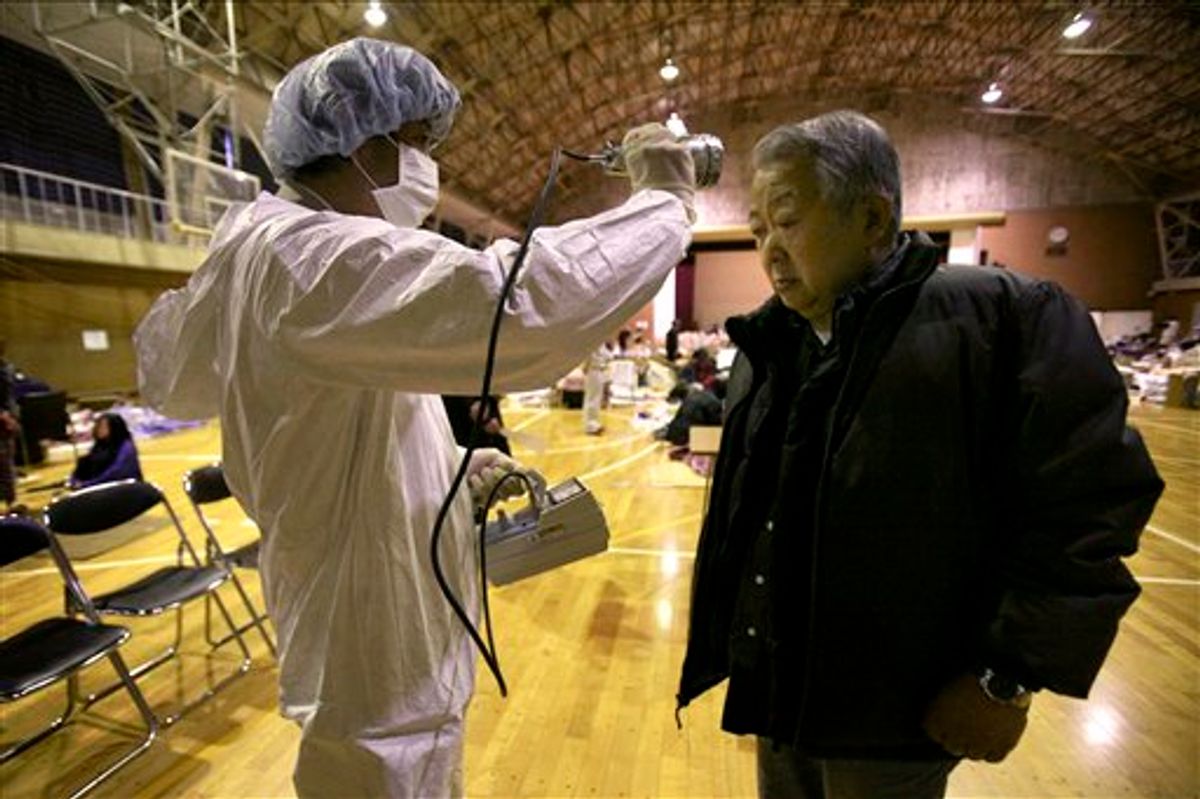 A man is screened for radiation exposure at a shelter after being evacuated from areas around the Fukushima nuclear facilities damaged by last week's major earthquake and following tsunami, Wednesday, March 16, 2011, in Fukushima city, Fukushima prefecture, Japan. (AP Photo/Wally Santana) (AP)
--

On Wednesday, the Chairman of the U.S. Nuclear Regulatory Commission, Gregory Jaczko, depicted the threat posed by Japanese nuclear reactors as much graver than had been suggested by Japanese officials.  Yesterday, this is how The New York Times described the impact (or lack thereof) of Jaczko's statements in Japan:

Most Japanese citizens did not react to Mr. Jaczko’s comments, which presented a far bleaker assessment of the unfolding nuclear crisis, for the simple reason that they went nearly unreported in the Japanese news media. . . . The technical nature of the issue perhaps compounded the Japanese news media's tendency to shield the government. Reporters who cover agencies and ministries are organized in press clubs that have cozy ties with officials and decide what to report -- and what not to. The lack of attention received by Mr. Jaczko’s comments was consistent in the news media.

I wonder what it's like to be a citizen of a country plagued by the "news media's tendency to shield the government" due to "cozy ties with officials" on the part of "reporters who cover agencies" and other government departments.  That must be awful.  Fortunately, the U.S. has a free press and we'll therefore never have to find out.  After some of his fellow journalists attacked The Rolling Stone's Michael Hastings for publishing Gen. Stanley McChrystal's statements that led to his dismissal, Politico helpfully explained:

McChrystal, an expert on counterterrorism and counterinsurgency, has long been thought to be uniquely qualified to lead in Afghanistan. But he is not known for being media savvy. Hastings, who has covered the wars in Iraq and Afghanistan for two years, according to the magazine, is not well-known within the Defense Department.

And as a freelance reporter, Hastings would be considered a bigger risk to be given unfettered access, compared with a beat reporter, who would not risk burning bridges by publishing many of McChrystal's remarks.

Shortly after Politico published its article with those two paragraphs of rarely spoken truth, it quickly deleted them, so we can just pretend that never happened.  But unfortunately for our efforts to forget, The New York Times' John Burns, while on right-wing talk radio, also criticized Hastings' reporting on the ground that "it has impacted, and will impact so adversely, on what had been pretty good military/media relations"; that Hastings' reporting contradicted "a kind of trust" which war reporters "build up" with military officials that is "not explicit, it's just there"; and that this touching reporter/General relationship should guide decisions about "what it is necessary to report."  Anyway, as The New York Times was saying, important events are being suppressed in Japanese political discourse because -- over there -- "reporters who cover agencies and ministries. . .  have cozy ties with officials and decide what to report -- and what not to."