As candidate, he insisted that presidents lack the power to enter conflicts without approval. What will he do now? 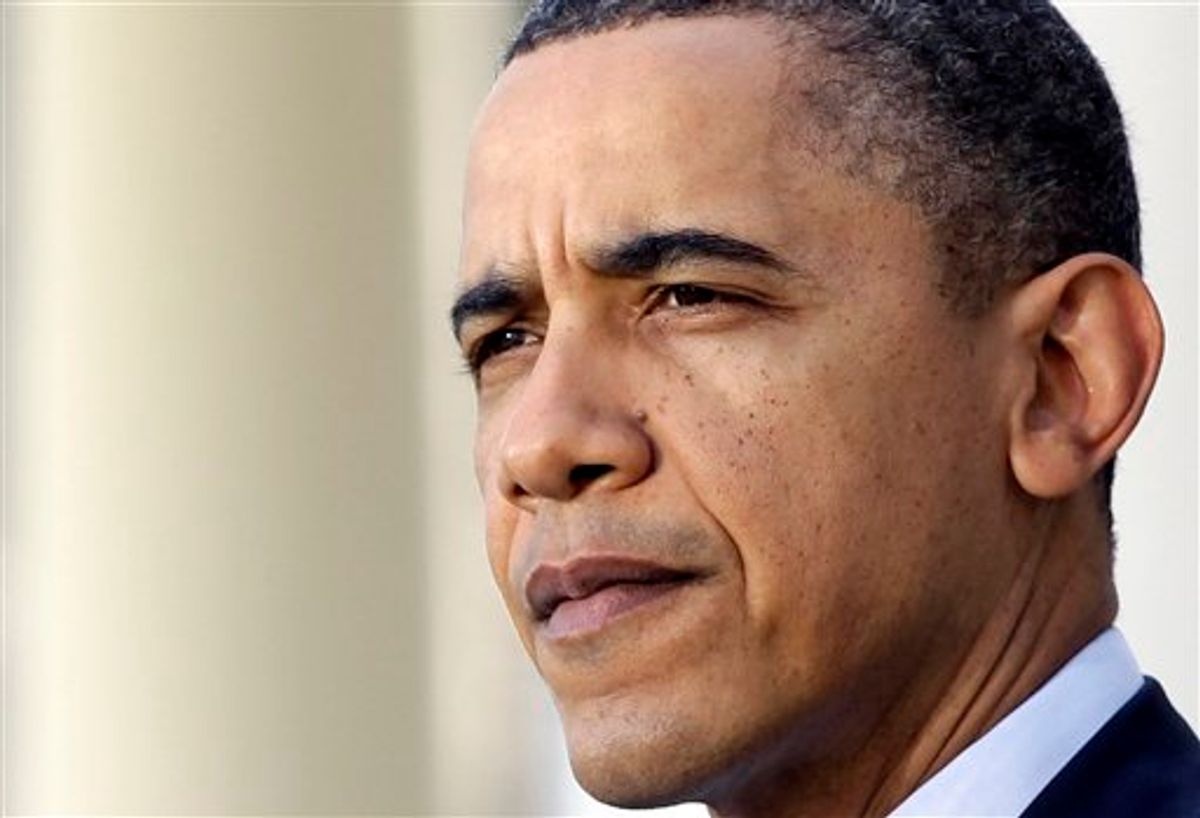 The U.N. Security Council Resolution authorizing military force in Libya does not, on its face, compel U.S. involvement, but news reports (and common sense) suggest that American participation is likely.  That has led to debates over whether the President is constitutionally empowered to order military action in Libya without Congressional approval, whether it be in the form of a declaration of war or at least some statutory authorization to use military force (my views on the substance of this new war are here).

I will simply never understand the view that the Constitution allows the President unilaterally to commit the nation to prolonged military conflict in another country -- especially in non-emergency matters having little to do with self-defense -- but just consider what candidate Barack Obama said about this matter when -- during the campaign -- he responded in writing to a series of questions regarding executive power from Charlie Savage, then of The Boston Globe:

Q. In what circumstances, if any, would the president have constitutional authority to bomb Iran without seeking a use-of-force authorization from Congress? (Specifically, what about the strategic bombing of suspected nuclear sites -- a situation that does not involve stopping an IMMINENT threat?)

OBAMA:  The President does not have power under the Constitution to unilaterally authorize a military attack in a situation that does not involve stopping an actual or imminent threat to the nation.

As Commander-in-Chief, the President does have a duty to protect and defend the United States. In instances of self-defense, the President would be within his constitutional authority to act before advising Congress or seeking its consent.

Obama's answer seems dispositive to me on the Libya question:  "The President does not have power under the Constitution to unilaterally authorize a military attack in a situation that does not involve stopping an actual or imminent threat to the nation."  And he went on to say that the President could constitutionally deploy the military only "in instances of self-defense." Nobody is arguing -- nor can one rationally argue -- that the situation in Libya constitutes either an act of "self-defense" or the "stopping of an actual or imminent threat to the nation."  How, then, can Obama's campaign position possibly be reconciled with his ordering military action in Libya without Congressional approval (something, it should be said, he has not yet done)?

And here's what then-Sen. Hillary Clinton said in response to the same question from Savage; it's at least as clear as Obama's answer:

The President has the solemn duty to defend our Nation. If the country is under truly imminent threat of attack, of course the President must take appropriate action to defend us. At the same time, the Constitution requires Congress to authorize war. I do not believe that the President can take military action -- including any kind of strategic bombing -- against Iran without congressional authorization. That is why I have supported legislation [GG:  also supported by Obama] to bar President Bush from doing so and that is also why I think it is irresponsible to suggest, as some have recently, that anything Congress already has enacted provides that authority.

Leading Democrats constantly argued the same thing during the Bush years:  that Presidents lack the power to order military actions in non-emergency, non-self-defense situations without Congressional approval; indeed, they insisted that even the attack on Iraq, which (unlike Libya) was justified as necessary for self-defense, required Congressional approval [and, needless to say, the always-principled Republicans routinely argue that Presidents do possess unilateral war-making power whenever there is a GOP President, but argue the exact opposite when there is a Democratic President].  There has to be some purpose to Article I, Section 8's assignment of the power "To declare War" to Congress; what is it?  As Yale Law Professors Bruce Ackerman and Oona Hathaway put it:

No existing statute or treaty allows this action. Gaddafi isn't linked to Al Qaeda, so an attack against him isn't supported by the resolution authorizing force against terrorists involved in 9/11. If Obama goes it alone, he must return to Bush-era assertions that the president, as commander-in-chief, can unilaterally launch the nation into war. . . .

We are at a crossroads. President Obama can deal a death blow to our constitutional commitment to checks and balances in war-making. Or he can establish a precedent in constructive congressional engagement which will serve as a model for the foreign policy challenges of the twenty-first century.

The arguments made to justify such unilateral presidential action are uniquely unpersuasive.  Former Bush OLC official and Harvard Law Professor Jack Goldsmith, along with others, points to Clinton's air bombing campaign of Kosovo without Congressional approval, but the mere fact that X happened in the past does not mean X is justifiable; that would be like pointing to FDR's internment of Japanese-Americans to argue that Presidents are constitutionally empowered to imprison American citizens on U.S. soil without due process.  I've also heard the claim that actions undertaken as part of NATO or the U.N. are somehow exempt from the constitutional requirement, but the fact that a war is fought with allies does not make it any less of a war (Congress declared war during World War II; it also voted to authorize the first Gulf War and the attack on Afghanistan even though they were done, respectively, through the U.N. and NATO).  And then there's the notion that the War Powers Act entitles a President to order military force for a limited time without Congress, but that constitutionally dubious statute has never been tested and thus does not remotely resolve the constitutional question.

The one point I want to underscore is that the constitutional requirement for Congressional approval is not some legalistic or technical barrier; it's vital.  The Founders emphasized that war is the most serious matter upon which a nation can embark, that it is the citizenry that bears the risks and costs, and it is thus imperative that they first consent through their representatives in Congress.  John Jay explained in Federalist 4 that Presidents will start wars that are unnecessary and unjust -- i.e., for their own self-serving benefit -- but the people are much less likely to do so (emphasis added):

But the safety of the people of America against dangers from foreign force depends not only on their forbearing to give just causes of war to other nations, but also on their placing and continuing themselves in such a situation as not to invite hostility or insult; for it need not be observed that there are pretended as well as just causes of war.

It is too true, however disgraceful it may be to human nature, that nations in general will make war whenever they have a prospect of getting anything by it; nay, absolute monarchs will often make war when their nations are to get nothing by it, but for the purposes and objects merely personal, such as thirst for military glory, revenge for personal affronts, ambition, or private compacts to aggrandize or support their particular families or partisans. These and a variety of other motives, which affect only the mind of the sovereign, often lead him to engage in wars not sanctified by justice or the voice and interests of his people.

After George H.W. Bush ordered the invasion of Panama, New York Times correspondent R.W. Apple wrote that starting new military conflicts is "a Presidential initiation rite," that "most American leaders since World War II have felt a need to demonstrate their willingness to shed blood," and that Bush's order to attack tiny, defenseless Panama "has shown him as a man capable of bold action."  Just as the Founders predicted, allowing Presidents to order military attacks without the approval of the citizenry (through their Congress) has engendered a whole slew of unnecessary wars that serve the political and ruling classes but not the people of the country.

The dangers from unilateral, presidential-decreed wars are highlighted in the Libya situation.  There has been very little public discussion (and even less explanation from the President) about the reasons we should do this, what the costs would be on any level, what the end goal would be, how mission creep would be avoided, whether the "Pottery Barn" rule will apply, or virtually anything else.  Public opinion is at best divided on the question if not opposed.  Even if you're someone who favors this intervention, what's the rationale for not requiring a debate and vote in Congress over whether the President should be able to commit the nation to a new military conflict?  Candidate Obama, candidate Clinton, and the Bush-era Democrats all recognized the constitutional impropriety of unilateral actions like this one; why shouldn't they be held to that?

Yesterday, Yale Law Professor Jack Balkin wrote one of the most insightful and succinct accounts of Obama's presidency and the National Security State; one can quibble with parts if one wishes, but I highly recommend it.