Pick of the week: The pretty boy triumphs as a flawed hero in the gripping L.A. thriller "The Lincoln Lawyer" 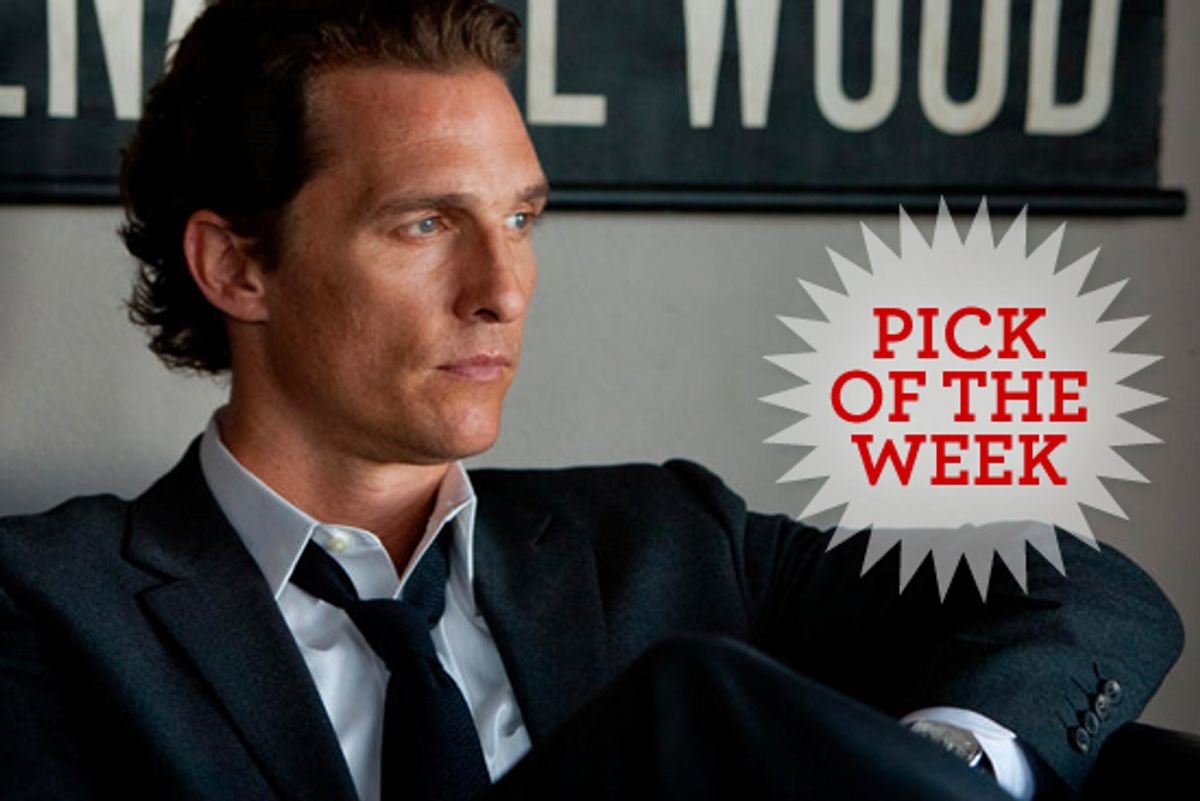 Spring is finally upon us, and if what you need to chase the last cold-weather blahs away is an old-fashioned American crime flick about a good-looking, half-corrupt guy, a beautiful woman who's tough as nails and a mystery so dark the California sun can't penetrate it, then this week offers one of the year's most delightful Hollywood surprises. Fueled by a bravura, career-reshaping lead performance from Matthew McConaughey and the stylish, assured direction of Brad Furman (whose only previous feature is "The Take"), "The Lincoln Lawyer" turns Michael Connelly's best-selling novel into a gritty, gripping L.A. noir, heir to the spirit of Raymond Chandler, "The Rockford Files" and "Jackie Brown."

No, I know: I didn't hold out much hope for this movie either. I don't want to oversell, but doggone if it isn't good! Although the saga of Mick Haller (McConaughey), a skilled but sketchy defense attorney who does business from the back seat of a not-so-new Lincoln Continental, is set within a decade of the present -- I'm guessing the production designers were aiming at 2004 -- Furman's film has a funk 'n' soul late-'70s feeling with a dynamite soundtrack to match, as if it were a forgotten West Coast project from early in Martin Scorsese's career. It's not like I'm inventing that comparison: Early in the film we follow McConaughey and John Leguizamo (playing a shady bail bondsman) through the circuitous corridors of a courthouse in an extended traveling shot right out of the Marty playbook. At least to my taste, Furman and cinematographer Lukas Ettlin never let their technique get in the way. This is lean, mean storytelling, focused on the characters, their setting and their predicament. (Connelly fans: I am aware that the lawyer is called Mickey in the books, not Mick, and that his office is a Town Car, not a Continental. So it goes in the movies.)

McConaughey was unfairly stigmatized as a vapid pretty boy at the peak of his stardom, and was often more enjoyable than he had any reason to be in mediocre rom-coms like "The Wedding Planner" (which might, in retrospect, have been Jennifer Lopez's high-water mark as a movie star). He's still plenty handsome as a harder-edged character actor in his 40s, and may be heading for a highly satisfying Clooney/Newman second act. He walks the fine line between charm and sleaze beautifully as Mick, a guy whose suits fit a little too well and whose hair has a touch too much grease. Mick is likable enough and retains some basic human decency, but doesn't appear to have any ethical scruples you'd notice. He defends Hell's Angels, drug dealers, hookers and murderers -- any lowlife who can pay -- and does his best to get them off on technicalities or plea-bargain down to the minimum.

Like any hard-boiled hero, Mick drinks too much and yo-yos in and out of bed with his prosecutor ex-wife, Maggie (Marisa Tomei), who doesn't entirely want him back because she suspects that defending scumbags has left him permanently scum-slimed. Of course this is a film noir, so Mick's next client is as symbolic, and as fearsome, as the dragon in a medieval romance. That would be Ryan Phillippe as the insolent, smirking Louis Roulet, a rich kid who claims he's been set up in the vicious beating of a prostitute. As Mick tells his friend and private eye Frank (William H. Macy, with an awesome aging-surfer hairdo), the scariest kind of client is an innocent man. Louis and his well-connected Beverly Hills family represent both tremendous opportunity and grave danger, a big-time meal ticket and a chance for Mick to save his own soul.

As Mick and Frank begin to peck away at Louis' case, which -- surprise, surprise! -- conjures up strange echoes of a different case from Mick's past, Furman fills up the movie with delicious supporting characters and a baked-L.A. vibe so strong you can almost smell the weed, smog and hot asphalt. Frances Fisher plays Louis' mother, a buttoned-up matriarch who seems (at first) like a befuddled observer of the complicated chess game between Mick and her son. Macy, as always, can create an entire character out of almost nothing -- a nonplussed reaction, a single line, a haircut and a pair of shorts. Shea Whigham and country singer Trace Adkins are hilarious in brief appearances, playing the two most disreputable witnesses ever to appear in an American courtroom.

Given that the plot of "The Lincoln Lawyer" is either archetypal or formulaic (take your pick) and that you may detect some of the twists before they get here, it's crucial that Furman's direction, John Romano's screenplay and McConaughey's performance are so vivid and high-spirited. It's rare enough to see a Hollywood movie made with this much attention and personality, let alone one that balances comedy and darkness as well as this one does. Not everybody makes it out of "The Lincoln Lawyer" alive, but this is a colorful and generous entertainment, not a plunge into the abyss. If its charming, roguish and not-quite-depraved hero can be redeemed, there may be hope for the rest of us. And as loath as I am to endorse sequels, there are at least three more Haller novels. If Furman and McConaughey want to build a franchise here, you won't hear me complaining.