Neil Strauss on rock stars, Charlie Sheen and the art of a good interview 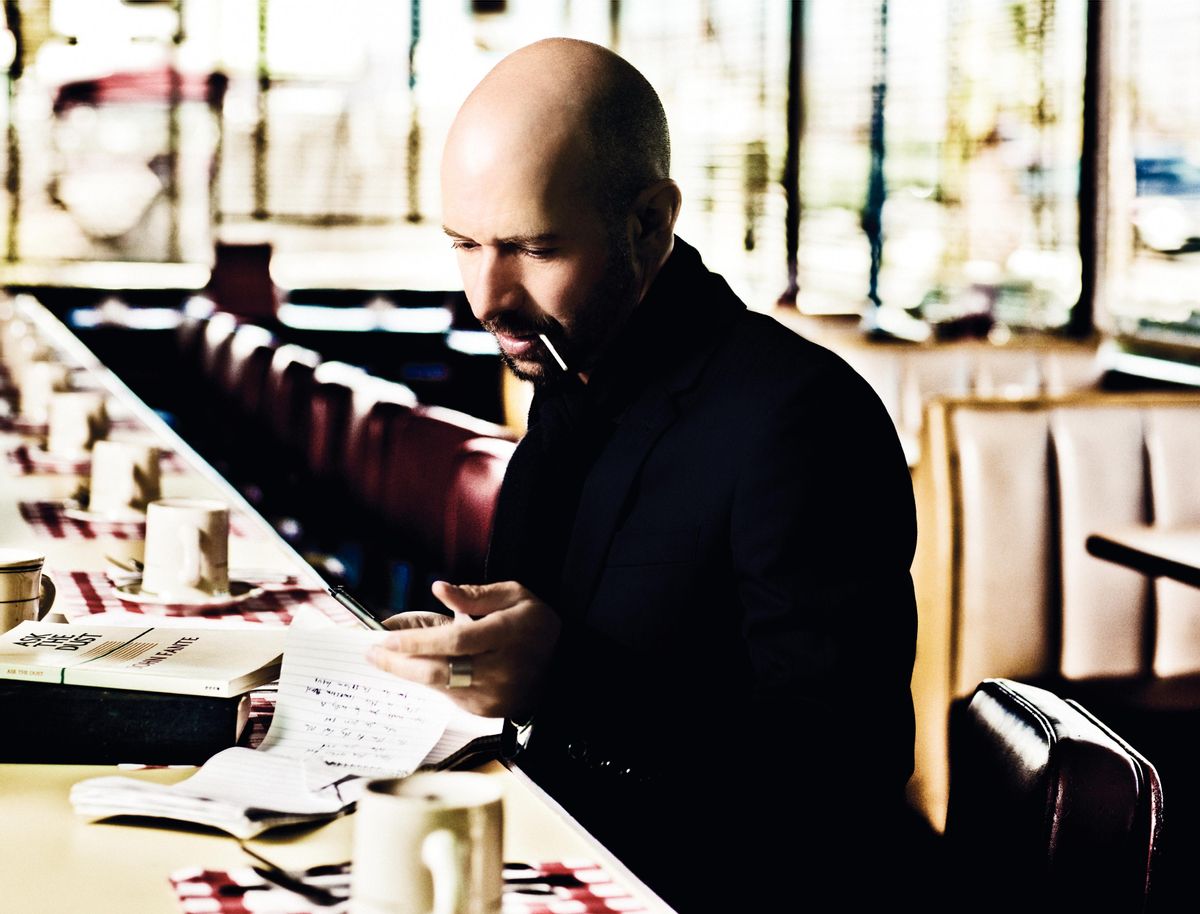 Neil Strauss, king of the interviews
--

I was nervous before going to meet Neil Strauss, whose new book, "Everyone Loves You When You're Dead," is an anthology of his two decades of celebrity interviews. Despite his numerous books and hundreds of articles for Rolling Stone and the New York Times, Strauss will be forever known to the general public as the guy who wrote "The Game," which documents his experience in the "seduction community" along with famous pickup artist Mystery. Neil and I were going to take a 50-minute car ride from his hotel in Manhattan to a bookstore in Brooklyn where Strauss would be speaking, and -- not that I was worried anything would happen -- I was essentially locking myself in for a long haul with someone who has become an expert at psychological examination and dissection.

I shouldn't have been worried. Neil Strauss was more wary of me than I was of him. "You scare me as an interviewer," he says after I express my own trepidation. "Because the kind of person that is bad socially -- and I'm not saying you are, but you did say you were awkward socially -- but really trusts their fingers, they are scary to talk to. You don't know what they're thinking, and you don't know what's going to happen after they go home and get in touch with how they really communicate."

So with it established that we both freaked the other one out a little bit, I attempted to interview one of the most established interviewers in the world.

So how do you think that changes the process of connecting with someone, both as an interviewer and as a subject?

It sucks as the interviewer. Most of the stuff in the book never would have happened nowadays because you don't get the same access. They [the celebrities] don't need the journalists as much. Now they can just tweet and Facebook to their fans as exactly the type of person they want people to think they are, versus what I try to do in my Rolling Stone profiles, which is to show who they really are.

Over and over in this book, the stars you interview keep saying, "Oh, I never told anyone this," or "I can't believe I'm showing [a journalist] this side of me."

I do realize there is a mutual seduction process at work. They want me to like them, so who knows, maybe they say those types of things to make me feel like the interview is special. I'm always petrified before interviews, even now. They are really stressful, and take tons of prep work.

I remember you telling Zac Efron that maybe he doesn't party as hard as co-stars because he comes from a nuclear family, and I was like, "Wow, this guy has really done his homework."

Yeah, well, Zac is easy, he's had a short career. There have been times when I've almost turned down the profile with huge, mainstream artists because I haven't wanted to go memorize and immerse myself in their entire recorded career.

You have an interesting style of interviewing people, where it comes off less like you have a series of questions you want answers to, and more like you decide what direction to take things in after listening to them talk. A lot of times this ends up with the stars asking you for your opinion about them. Is there a secret to getting these heavily guarded people to confide in you?

The three successful keys to a good interviewer is being nonjudgmental, being naturally curious and deep listening. And that's not just hearing what people say, but feeling out the words, the pauses and those sorts of things as you decide where to dig in deeper, where people are being sincere and real.

You have that infamous Britney Spears interview in your book, where you used some of the techniques you picked up in "The Game" on her. How often do you use the skills you learned from Mystery and the pickup artists when talking to famous people?

I use it all the time, but that just adds on to what I just said is fundamentally true about how to get a good interview. What "The Game" added was two things: one, in harder interviews how to get people to open up, and two, a way to understand and connect with someone. So I would run the routines I learned in order to get a stranger, someone you just met, to become someone you know and who knows you better. Male or female, doesn't matter.

Can you give me some examples?

The White Stripes, when I interviewed them, were closed off, were really closed off. I did this thing called eliciting values. It's basically asking these three questions to find out what somebody's core motivating goals are. If you check out "Rules of the Game," it's in there, under "routines" section.

What are the three questions?

I feel like if I explain them to you, it would be boring. Another example would be Madonna: I was just another guy who showed up to interview her, you know, and we're on her private plane. It's going OK, but then I thought, "What if I pull the lying game on her?"

I think it was the lying game, yeah. It's where you can tell when someone is lying, they don't even need to speak, you can tell when people are just thinking lies. And Madonna got really into it, and it really bonded her stylist and her manager, and everyone just became more interested. They all just enjoyed the experience. They think, "Oh, a journalist is coming, it's going to suck," and they have to be on good behavior because they're going to be judged, they're going to be written about. And now they're just having fun, and they are learning about themselves and they're like, "This is awesome."

Is there anyone who has been entirely nonreciprocal to this approach?

Not really. And one last thing about being a good interviewer: The biggest mistake I could make as a journalist would be trying to prove myself to them. To say, "This is why I'm special too." You want them to be focused on themselves, not you.

So if you were me, and you were interviewing Neil Strauss, what techniques should I be using on you?

I don't know. I don't think you'd need to use any. I'm pretty talkative.

Would you like to interview Charlie Sheen? I feel like you'd be able to get something out of him that these other interviews haven't. They've been lobbing such softballs at him.

When I'm doing an interview, I am not lobbing hardballs or softballs, because that is the worst fucking way to do an interview. It's good for TV because it makes you look like a good reporter, but what happens when someone lobs a hardball? You duck. What I'm doing is creating a safe space, where people can communicate. What I want to know is what motivates him. I don't care about what his behavior is, I want to know why he's doing it. Not things like, "Do you guys all sleep in the same bed?" I mean, good question, funny question, but it's the icing on the cake. To me, the cake is finding out what makes him tick. When I just did an interview with Howard Stern for Rolling Stone, I made him draw a map of childhood and examine that. Through that map, we examined his psyche.

The last thing I'll say about Charlie Sheen is that I've been telling HarperCollins for two years that I want to ghost-write his book with him. But Charlie Sheen has become less interesting to me now, because you used to know he had this dark side, but it was covered up. And now it's like his dark side has taken over.

And here's the crazy thing about culture. One week he's talking about warlocks and tiger blood, the next he's making a video for Funny or Die parodying those things he just said. That's how fast our culture moves now.

Have you ever considered doing a fiction book? Your satire pieces are really funny insights into pop culture.

No, because I feel like there is this time-sensitivity thing. Like, if I don't write about this pickup community now, someone else will. If I don't do my anthology now ... Plus, my nonfiction books are all based on literature. So that Mötley Crüe book ("The Dirt") is based on William Faulkner's "As I Lay Dying."

Faulkner, really? You couldn't pick anything a little more ... accessible?

Do you ever feel like a rock star whenever you get to these speaking events?

No, because a rock star is inaccessible, and I'm accessible. I feel like rock stars feel a sense of entitlement, whereas I just feel a sense of good fortune. Which is funny, because if you go back to my book's theory, that quality would make me a terrible star. Because people who have been stars for a long time and held on to their fame feel entitled to it. They believe that God wants them to be famous, or it's their destiny. Versus people who get famous and feel like they got lucky, that they don't belong there ... they tend to not stay there as long. Jack White kept telling me at the MTV movie awards "I don't belong here, I feel like I'm in outer space," whereas the Christina Aguileras and Britney Spears of the world are still going.

Maybe that's because those who aren't comfortable with fame opt out of it.

So you're saying you have no faith in being Neil Strauss, the rock star?

No faith, and no desire.

Books To Watch Out For Celebrity Interviews Movies