New GOP governors in Wisconsin, Ohio and Michigan are suddenly unpopular. The economy gives, and it takes away 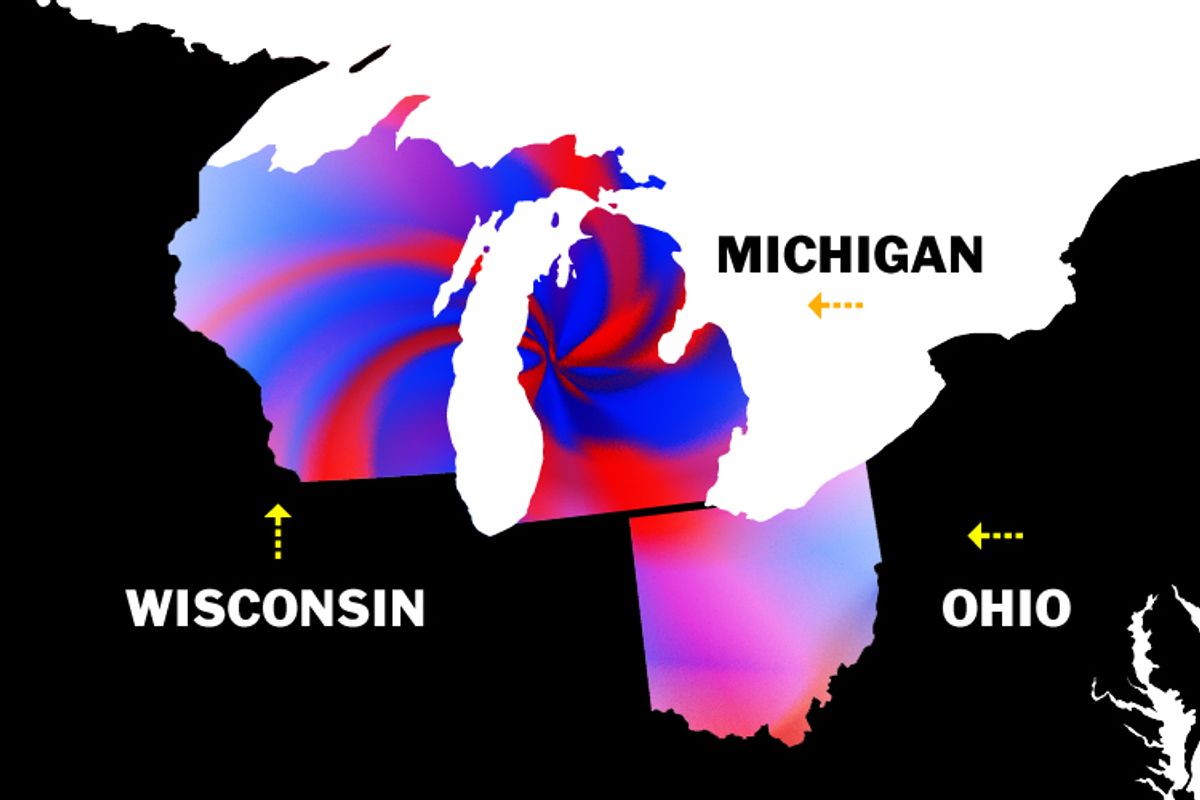 In 2008, Barack Obama carried Michigan, Wisconsin and Ohio, three crucial Midwestern states in which he had campaigned unceasingly. Two years later, the midterm tidal wave handed monolithic control of the state legislature and governor's mansion in each state over to Republicans. The new governors, Wisconsin's Scott Walker, Ohio's John Kasich and Michigan's Rick Snyder, immediately and forcefully moved to exploit their power in pursuit of bold Republican agendas.

We're not just talking good old-fashioned budget-balancing mandated cuts in public services. The grandiose ambitions of Wisconsin's Walker have been well chronicled. But Michigan's Rick Snyder has been equally aggressive. Snyder is proposing to cut corporate taxes in Michigan by 60 percent while simultaneously hiking the percentage of state revenues raised from individual income taxes from 31 percent to 41 percent. He just signed a "financial emergency law" giving him the right to appoint emergency managers -- with the legal power to arbitrarily cancel union contracts -- to replace locally elected government authorities. In Ohio, Kasich plans to gut public education spending, end collective bargaining by public sector workers, sell prisons to the private sector and push through a voucher plan for charter schools.

So now comes the backlash. Polls in each state show support for the trio of Republican governors plummeting. In Wisconsin, Democrats are counting the days until Walker is eligible for a recall, and in the meantime, pushing hard to retake control of the state Senate. On Wednesday, 5,000 protesters marched through the Michigan state Capitol -- the largest protest yet in that state -- and Gov. Snyder was booed by workers at a Ford Focus plant. Grass-roots resistance to Ohio's Kasich doesn't yet appear to have reached quite the same fever pitch, but if he ran for reelection today against his 2010 opponent, he'd get clobbered.

As quickly as the politics of the Midwest reversed themselves, once, they are doing so again, and political observers can be excused for suffering a severe case of whiplash. We're used to seeing the pendulum swing in the United States, but the action over the last two years -- from Obama's breakthrough to the Tea Party rebellion to Cairo-in-Wisconsin -- is more reminiscent of a strobe light's jitteriness. How to explain it?

For some political analysts, it's a classic case of overreach leading to buyer's remorse. For others, it's just some momentary turbulence that will be long forgotten by the time the next election rolls around. But this argument is hardly academic; exactly where the line gets drawn between those two poles could determine whether Barack Obama wins reelection.

Here's one theory that could help us lay odds on the future: Watch the unemployment rate.

In September 2009, Michigan's unemployment rate hit 15.3 percent -- the highest in the nation. In January 2011, the rate had fallen to 10.7 percent, down from 11.4 percent on Election Day 2010. Ohio and Wisconsin never reached quite such awful heights (indeed, Wisconsin, currently at 7.4 percent, has been doing much better than most of the country), but both states have recorded steady declines in recent months.

Although Michigan's unemployment rate had already started dropping sharply before the midterm elections, at the time, the national mood on the economy was still very gloomy, and nowhere more so than in Rust Belt Midwestern states that have received more than their fair share of hammer blows from globalization and other long-term economic trends. Two years of one of the worst recessions in American history inflicted serious damage on incumbent Democrats at the ballot box. But five months later, the economic recovery seems much firmer -- and if that continues, the citizens of Ohio, Michigan and Wisconsin are going to spend less time worrying about their immediate financial circumstances and more time questioning whether they are getting what they bargained for from their newly elected leaders.

Which poses the possibility of a serious double whammy for Republicans. They'll get blamed for what they've been doing since they gained power -- the overly harsh budget cuts, the crackdown on unions, the tax breaks for corporations -- while the incumbent in the White House gets the credit for the improving economy.

Election Day 2012 is still a long way off, but it's getting closer every day, and the political heat in the Midwest is already at the boiling point. If the economy continues to improve, the backlash against the conservative agenda will grow in tandem.