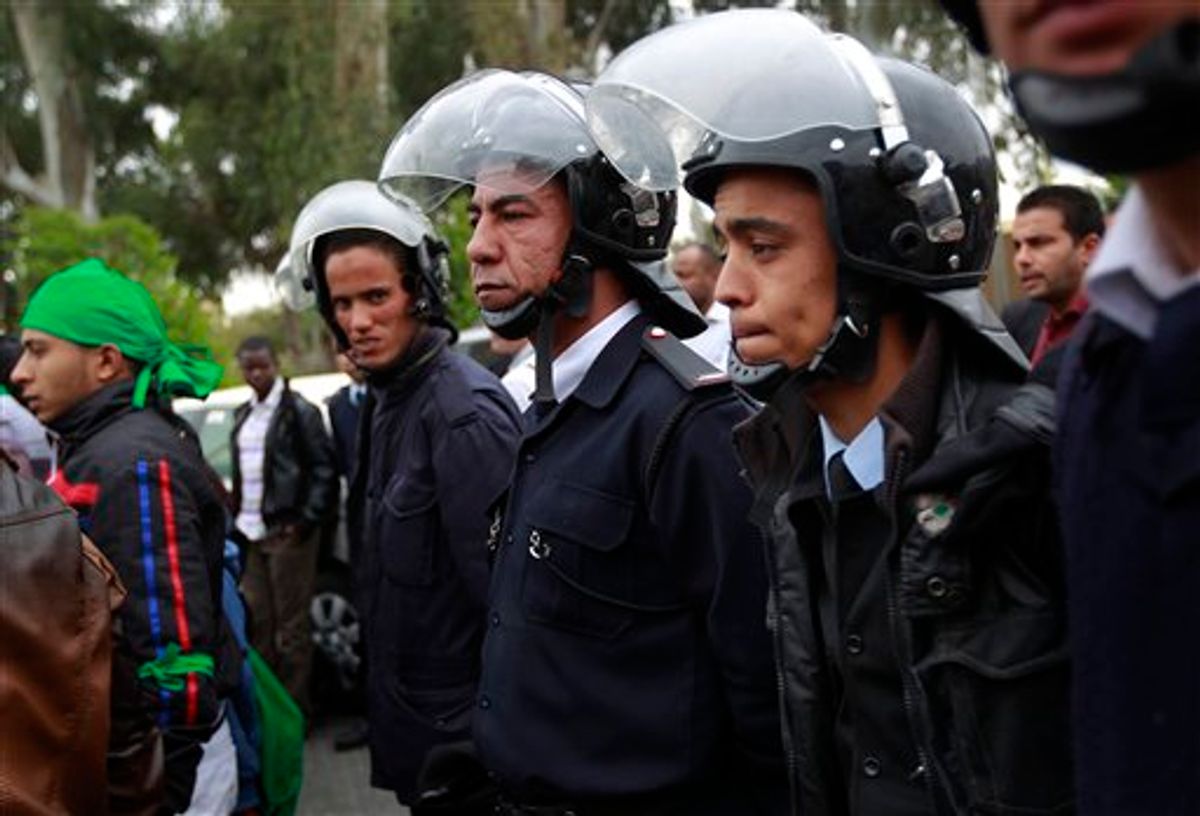 Libyan police stand in front of a group of women supporting Moammar Gadhafi staging a demonstration on the front doors of the Rixos hotel where foreign journalists are staying in Tripoli, Libya, Saturday March 19, 2011. Moammar Gadhafi warned international forces they would "regret" intervening in Libya and his troops attacked the heart of the 5-week-old uprising on Saturday, swarming the first city seized by the rebels with shells, gunfire and warplanes. (AP Photo/Jerome Delay) (AP)
--

A Libyan journalist who ran a webcast program showing the aftermath of government attacks and commentary on the uprising against Moammar Gadhafi was killed in Saturday's government assault on the rebel capital in the country's east.

Mohammed al-Nabbous, who founded a livestream channel called Libya Al-Hurra, or Free Libya, was hit by sniper fire as Gadhafi sent warplanes, tanks and troops into Benghazi, the first city to fall to the rebellion that began Feb. 15, friends said.

The four correspondents are Tunisian, Mauritanian, Norwegian and British. They were reporting from Libya for several days, the network said.

"Libyan authorities will be held responsible for the safety, security and well-being of the team who are being held in Tripoli, adding that regional parties are deploying efforts to secure their release," the Qatar-based channel said in a statement.

Al-Nabbous was the second journalist reported killed in the rebellion.

A week ago, an Al-Jazeera cameraman was killed in an ambush near Benghazi, the first journalist slain in the month-long conflict.

Several reporters have been arrested in Libya, including four journalists for The New York Times detained by government forces during fighting this week in the eastern part of the country. The newspaper reported Friday that Libyan forces said they would release them, but there has been no confirmation that they have been freed.

Gadhafi has kept Western journalists under tight control, taking them on tours of towns he has seized, and around the capital, Tripoli, under government escort to see squares filled with pro-regime loyalists.

Rebels have given journalists more freedom but moving around the swiftly changing lines of control has been perilous.