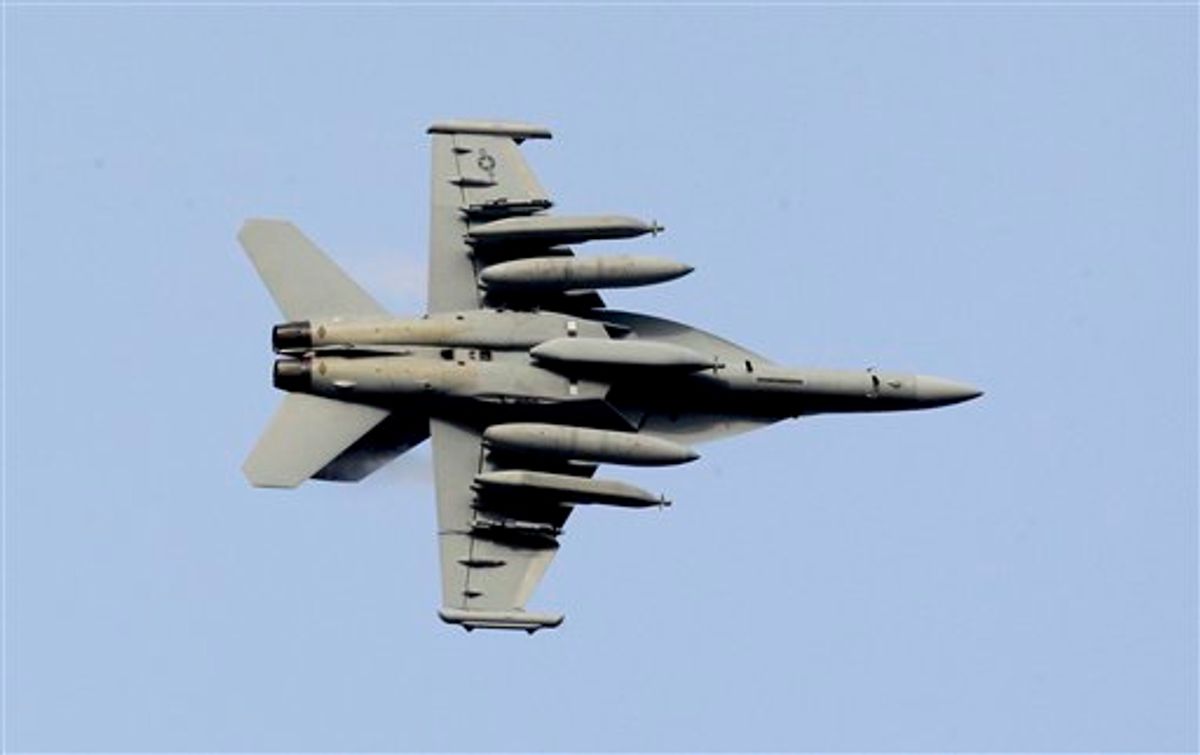 An F-18 growler jet fighter flies over the Nato airbase in Aviano, Italy, Saturday, March 19, 2011. NATO's top decision-making body is meeting in emergency session Saturday to review military plans for a no-fly zone over Libya. The North Atlantic Council is expected to issue the order to launch the operation during this weekend. Officials said the military staff was putting the final touches on plans to deploy dozens of fighter-bombers, tankers, helicopters and surveillance planes to several air bases along Europe's southern rim. (AP Photo/Luca Bruno) (AP)
--

A French official says Mirage and Rafale fighter jets are flying over the Libyan city of Benghazi and could strike Libyan tanks.

The official says the jets are flying over the opposition stronghold and its surroundings to ensure that Moammar Gadhafi's forces could not take any action there.

The official spoke on condition of anonymity because of the sensitivity of the operation.

Top officials from the United States, Europe and the Arab world have launched immediate military action to protect civilians as Libyan leader Moammar Gadhafi's forces attacked the heart of the country's rebel uprising.

The 22 participants in Saturday's summit "agreed to put in place all the means necessary, in particular military" to make Gadhafi respect a U.N. Security Council resolution Thursday demanding a cease-fire, Sarkozy said.

"Our planes are blocking the air attacks on the city" of Benghazi, he said, without elaborating. French planes have been readying for an attack in recent days.

British Prime Minister David Cameron said after the summit: "The time for action has come, it needs to be urgent."

France, Britain and the United States had warned Gadhafi Friday that they would resort to military means if he ignored the U.N. resolution.

A communique from the summit participants, referring to the U.N. Security Council resolution, said: "Our commitment is for the long term: we will not let Colonel Gadhafi and his regime go on defying the will of the international community and scorning that of his people.

"We will continue our aid to the Libyans so that they can rebuild their country, fully respecting Libya's sovereignty and territorial integrity."