How my life turned into "Big Love"

My boyfriend's ex moved in. Then he started flirting with another woman. How did one relationship get so tangled? 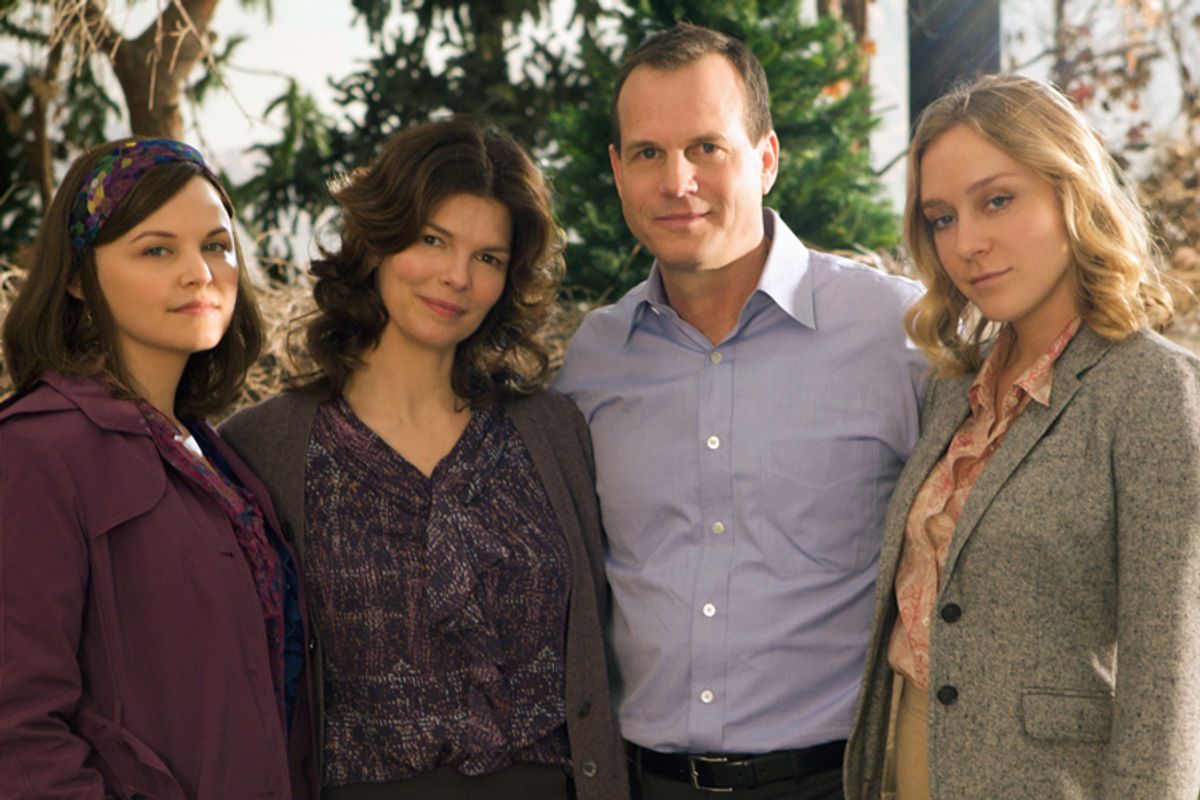 My boyfriend's ex-girlfriend moved in with us in late September. On the heels of a messy breakup, she had nowhere to go, and we had an extra bedroom -- it was that simple. On the night that J., my boyfriend, went to dinner with her to offer up our agreed-upon hospitality, he came home and hugged me afterward. "Sometimes I just can't believe how lucky we are," he told me. "Everyone else is so unhappy, but we're so fortunate to have found each other." We'd been together more than four years, and while he hadn't officially proposed, marriage plans were a topic of conversation. I wore a tiny diamond on my left hand, a promise ring he'd given me the previous year.

J. and his ex dated as teenagers and had remained close friends since. At the beginning of our own courtship, I was wary of their relationship, unsure of how close was too close when it came to an ex. But as J. and I got to know each other better, I learned that he'd lost his father suddenly in early adolescence, that he'd become estranged from his mother in the aftermath of that death. He'd been essentially on his own since age 15, living off the kindness of teachers, friends, and residents of the town just outside Boston where he grew up, the same town I eventually left New York for in order to be with him. What I gradually realized was that this unique web of friends and acquaintances he'd amassed over the years served as the closest thing to family in his life, ex-girlfriends included.

And so as he and I grew more serious, so did my friendship with her. It wasn't long before she and I were attending the same book club and trading recipes via email. Some of my girlfriends thought it strange that she and J. remained so close, that she and I had become pals, and that now, she was actually going to move in with us, but the truth was I'd come to like it. I liked that my boyfriend could be such a good friend to his ex. I liked that we could all be so modern and mature, so forward-thinking, so French. And furthermore, I liked her. She was smart, sensitive and funny, and we shared a mutual interest in books, cooking and yoga. As I cleaned out the guest room prior to her arrival in our home, I couldn't help feeling a twinge of pride.

A few weeks after the move-in, J., a carpenter, began a big renovation on a neighborhood bar that had him working 12-, 15-, even 18-hour days. Over the years I'd grown used to the distance between us when he was on such a job, but I'd also learned that when the work ended, he would return to me and reconnect as always. Anyway, he joked one evening over the phone, "You don't need me. You have your sister wife now."

I laughed. It was funny, because it was true. She and I had begun taking turns with dinner. We shared domestic duties and bottles of wine and watched television together in our pajamas, attempting to stifle any laughter because J. was asleep after another long day. Soon all three of us were tossing the phrase "sister wife" into most communal conversations, giggling all the while.

But a month or so later, J.'s job ended, and inexplicably, he stayed gone. He continued to skip dinner, coming home late from work with alcohol on his breath and one lame excuse or another. He took to sitting in the armchair across the room rather than beside me on the couch. He waffled on plans for my birthday, for Thanksgiving, for the long weekend we'd discussed taking in Vermont. Meanwhile, my sister wife had been splitting town quite often, spending time in my old home of New York in hopes of soon moving there. I found myself envious, entertaining elaborate fantasies of moving away. I began to realize that her absence seemed to amplify what I'd been trying to ignore for some time -- that J. and I were much farther apart than I wanted to believe.

Over dinner one evening I brought up our growing distance, but he managed to dodge the conversation. "I'm just stressed out," he told me. "I'm overworked and tired. I'm not feeling like myself. It'll pass." I tried to press him, but to no avail. That night, he went to sleep early, but I stayed up late, unsettled. I paced the apartment. I smoked a cigarette for the first time in years. When I finally climbed into bed beside him, his phone buzzed against my thigh. It was 4 a.m., and the text message on the screen read: "Are you awake?"

It was from the 21-year-old daughter of the woman whose bar he'd just renovated, and I scrolled up to find hundreds of exchanges between them. I was troubled by the sheer number of messages, but most appeared relatively harmless, little back and forth quips about how crazy her mother was or how drunk one of them had been the night before. I told myself it was nothing. J. had known her family since she was a child, and the two of them had a habit of going out for a burger every now and again. Even she and I were friendly. She served us dinner at her mother's restaurant several times a month, where she and I would chat about the best local jogging route or some nugget of neighborhood gossip. It's nothing, I told myself again, she's a kid. But then one text caught my eye, sent from him to her: "I'd love to, but I'm at a required event with first wife right now." And then another, even worse than the last: "You better watch out, I'm seriously considering bringing you on as third wife."

Suddenly, the joke was no longer funny. In an instant I was relegated to a position of nothingness, lumped together with a temporary roommate and a neighborhood waitress. I was no longer the lucky partner, the fiancée, the future wife. I was first wife. And apparently spending time with me was a chore.

Without thinking, I woke him. "Do you want to break up?" I asked. Dramatic, sure, but I thought maybe he needed some kind of wake-up call to snap him out of his funk. I was sure he'd apologize, that he'd tell me he loved me, tell me that no matter what we would find a way to fix this. But instead he just laid there for a long while, saying nothing. And then he opened his mouth and said: "Yes."

When pressed for a reason, he explained that we wanted different things. He no longer desired marriage and children -- two things he'd been hell-bent on for years -- nor did he think leaving Boston was a viable option for his future -- something I'd made clear I wanted down the road. "It's not for lack of love," he told me, his words coming out between sobs. "I just think it's time we cut our losses and move on."

Instinctively, this reasoning struck me as a cop-out. I wasn't happy either, but to end the relationship because of divergent futures seemed too easy a way out of the complex situation we were mired in at the present time. The unavoidable fact was that there were two other women here with roles to consider. The lid had blown off the pot of our relationship, and it seemed plausible, inevitable even, that these two women -- my sister wives, so to speak -- somehow had a hand in turning up the heat.

He swore nothing happened with the waitress, that it was nothing but a silly flirtation, a distraction from the doubts he'd been having about us. I didn't believe him, but a small part of me didn't care. After all, based on the tenets I'd gleaned from "Big Love," she was nothing but third wife: young, cute, vacuous -- a threat, to be sure, but only in the shallowest of ways.

Similarly, his ex emulated well the role of wife No. 2 -- blond, bright, emotional -- and I couldn't help asking if somehow she had something to do with this. "No," he insisted, "I don't think of her in that way. She's just an old friend to me, a sister." But for the first time, I truly considered what it meant to live with an ex. I thought of the boy I loved in high school -- the butterflies, the vulnerability, that first heartbreak -- and then tried to imagine him living in my apartment. Wouldn't his continued occurrence in my life, in my home, complicate matters? Wouldn't I recognize his laugh while we watched television, his preferences at the dinner table, his smell on folded laundry? Wouldn't his very presence be emblematic of a road not taken, of the thoughts and dreams I'd had at 17 that now, at 31, seem so far out of reach?

Less than a week after I read those text messages, I moved out. With space came perspective, and it wasn't long before the beginning of our end no longer seemed to have sprouted from his ex's appearance in our apartment, but rather back to a weekend in the preceding month, when I met J.'s mother for the first time. Truthfully, I did not like her, but it had less to do with that and more to do with the fact that I did not like the person I watched him revert to while he was around her -- bitter, angry and closed-off. We fought all weekend, something we rarely did, and while I didn't expect him to blindly forgive her for all the terrible ways in which she'd failed him, I wanted him to at least try to let some of it go. I wanted him to try to cultivate relationships with the siblings he barely knew. I wanted him to deal with the emotions he'd spent so many years bottling up so that he might finally find a way to move on. But he didn't want to do any of those things, and even though it took me a little while to come around to it, I think I realized right then that I wanted to make a life with the kind of person who did.

We invited his ex into our home because she needed a place to stay, but in retrospect I believe we also wanted a buffer for the pain we knew was already en route. It's possible that her presence in our home upended what little balance was left. It's possible that his flirtation with the waitress went too far. It's possible that his need to be loved in some way by several women is the result of never having received unconditional love from the one woman who mattered most. Any of these things are possible. What is definite, however, is that if I wanted to move on, I had to accept the fact that none of these other women were to blame.

After all, I was first wife -- brunette, independent, adored -- and I knew better than anyone that the defining decision was never in our taking on the third wife, or even the second, but rather in the moment that one of us decided that the other was not enough.

Jennifer Cacicio's writing has appeared in The New York Times, The Boston Globe, Bust Magazine, and elsewhere. She is at work on her first novel, Tree Listener.