A pro-lesbian movie about women in prison?

"Sugar Boxx" is a progressive entry into the campy genre. It also appears to have been filmed in a picnic area 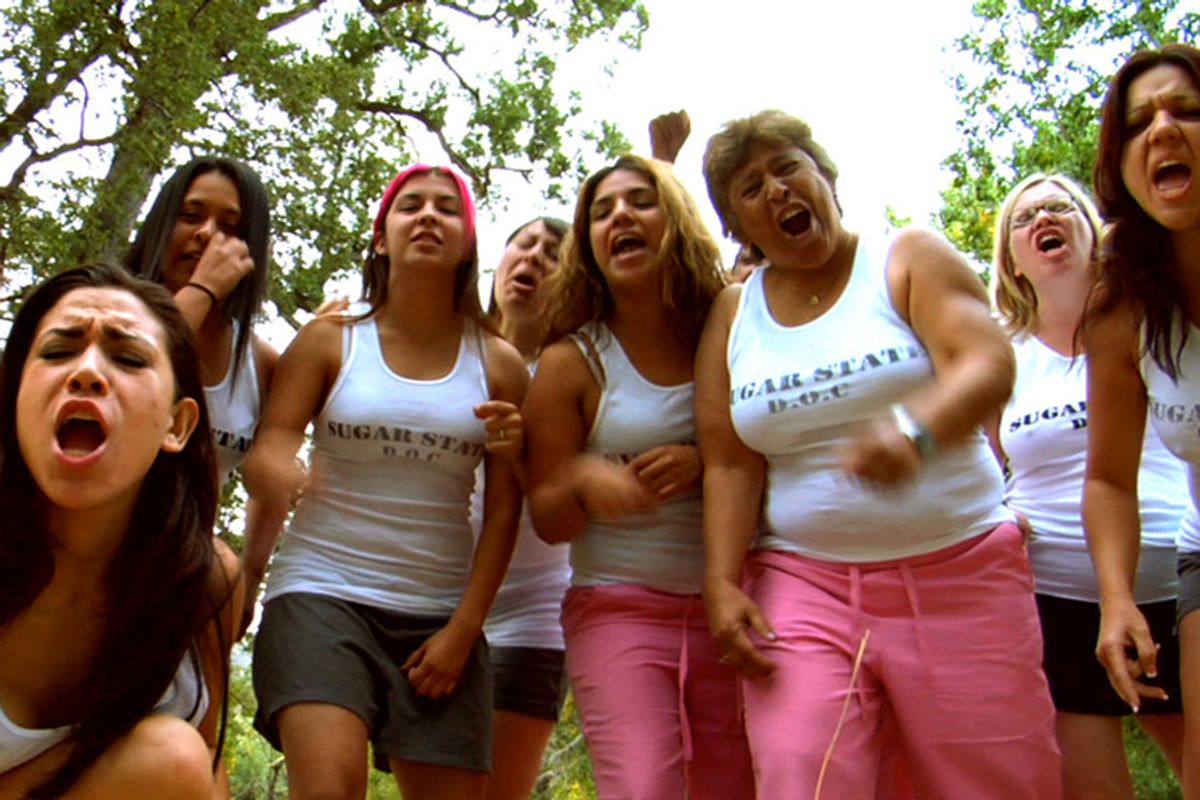 If a women's prison movie doesn't have an actual prison in it, should we still call it a prison movie? "Sugar Boxx," arriving on DVD this week from Entertainment One, can be described more accurately as a work camp movie because the producers couldn't afford an actual cell or even a few steel bars to throw in front of the camera at any point during the film's 86-minute runtime. Instead, our women in bondage look like they're spending a bummer of a vacation at a public park -- picnic tables and all. As these sultry babes undergo the torments of their shoulder-pad wearing warden (Linda Dona) and her peckerwood guards, I half-expected to see volleyball nets, barbecue pits and horseshoe spikes. Director Cody Jarrett ("Frog-g-g!") manages to shoot around such campground attractions for the most part, but leaves in a few random goats from what must be a nearby petting zoo.

As the film's screenwriter, Jarrett boasts one accomplishment: In the traditional women-in-chains flick, lesbianism is something inflicted on our wrongly accused protagonists by butch cellmates or obese lady guards who threaten the lash for noncompliance, but in "Sugar Boxx," plucky TV reporter Valerie March (Geneviere Anderson) is in a committed lesbian relationship from the get-go. In fact, much of the film's suspense, if you manage to care at all, is generated by Valerie's efforts to avoid compromising her sexual orientation as the drooling hicks of the Sugar State Women's Prison attempt to force themselves on her. This is by far the most enlightened aspect of "Sugar Boxx," which for the most part makes "Reform School Girls" (1986) with Wendy O. Williams of the Plasmatics look like it was produced by Stanley Kramer.

After finding out that the number of women under 25 getting thrown into the Sugar State Pen has gone up 400 percent, Valerie slides into a sequined tube top and gets arrested for prostitution to "get this story from the inside out." After being sentenced to the women's facility of her choice by judge Jack Hill (director of the cult classic "Spider Baby" as well as "The Big Bird Cage"), Valerie and her fellow inmates spend as much time topless as possible. When they wear any clothes at all, they're either slinking around in what appears to be the top half of pink scrubs from a pediatric ward sans pants or the aforementioned tube tops. Tube tops are the go-to garments of "Sugar Boxx."

Of course, women are thrown in the hot box, whipped and have every other depravity of this sub-genre inflicted upon them. When Valerie escapes with the info that the warden is forcing inmates into servicing corrupt state officials during poolside parties, the wrongdoers beat the rap easily. Once on the outside, Valerie puts the tube top back on, grabs a machete and leads a mission to break back into Sugar State Pen to mete out some rough justice. Joining her are a former guard, a pimp in a lavender fedora named Prince Albert and some women who think that slinky undies are the proper attire for a commando raid. Hands are lopped off and music trying as hard as it can to sound like it was recorded in 1975 is heard.

Showing that the influence of "Grindhouse" (2007) and "Black Dynamite" (2009) has finally dripped down to the lowest rungs of the film industry, "Sugar Boxx" has a credit sequence that's made to look like a neglected piece of aged celluloid. However, unlike those theatrically released tributes to '70s exploitation movies, the purposely marred credits are the most technically sound minutes of the entire film. "Sugar Boxx" has the overall quality level of a James O'Keefe sting video, except that no careers of NPR development officers were harmed during filming. It also has appearances by the recently departed Tura Satana ("Faster, Pussycat! Kill! Kill!") and fellow Russ Meyer vixen Kitten Natividad ("Beneath the Valley of the Ultra-Vixens"), a classy move from a movie where such elements are in purposefully short supply.

If you remain undeterred from watching "Sugar Boxx" and want to create a straight-to-DVD grindhouse double feature all your own, Entertainment One is also releasing "Dark Fields," a surprisingly atmospheric little horror flick with a posthumous star performance by David Carradine. Despite being dead for nearly three years, Carradine currently has two films in post-production ("Night of the Templar" and "Eldorado") and probably a few other movies that haven't had any kind of U.S. release yet, DVD or otherwise. Besides Carradine, "Dark Fields" sports a creepy Indian shaman in a top hat who drinks the blood of children and a curse that makes the inhabitants of the small town of Perseverance look like a dried-out riverbed. Dee Wallace ("E.T.: The Extra-Terrestrial" and "The Howling") and Richard Lynch ("Sword and the Sorcerer") also appear throughout this movie's multi-layered timeline. It's more ambitious than your average straight-to-DVD chiller, but is still curtailed by its budget.

Bob Calhoun is a regular Open Salon blogger and the author of the punk-wrestling memoir, "Beer, Blood and Cornmeal: Seven Years of Incredibly Strange Wrestling." You can follow him on Twitter.