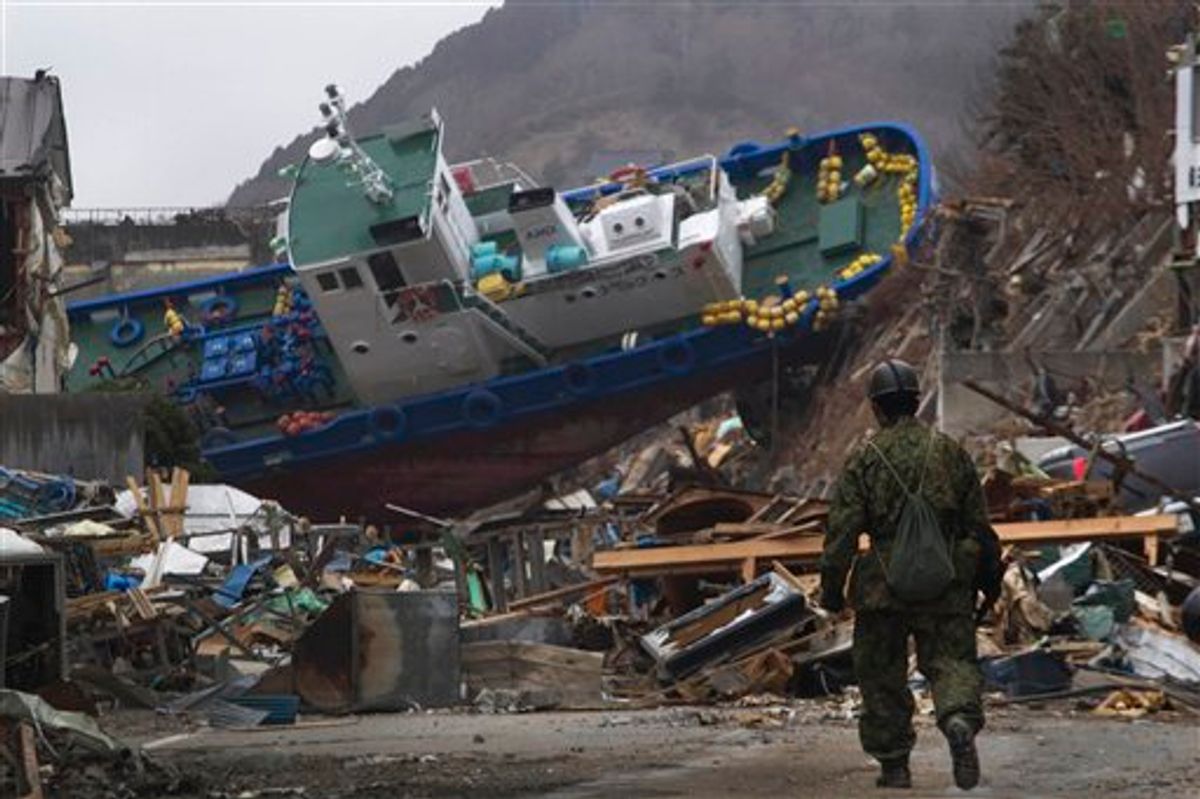 A Japanese soldier walks towards a ship which was blocking a road that his men were trying to clear in the earthquake and tsunami destroyed town of Onagawa, Miyagi Prefecture, northeastern Japan Sunday, March 20, 2011. (AP Photo/David Guttenfelder) (AP)
--

The voice rang out suddenly, unexpectedly, from the wreckage left behind by the monstrous earthquake and tsunami that ripped through the country's northeast nine days ago.

There, on the roof of his collapsed wooden home, stood a shivering Jin Abe, so cold that he had draped layers of towels around his body. His grandmother, Sumi Abe, was trapped inside, too, the 16-year-old told the team of Ishinomaki police officers who had been patrolling the hard-hit city on Sunday.

The two had been stuck there since the March 11 magnitude-9.0 quake struck off the coast of Japan, triggering a massive tsunami that obliterated much of the northeastern coastline. Their neighborhood, too, lay in ruins.

The 80-year-old woman's weak legs kept her from walking, and the teenager had been unable until Sunday to crawl out of the wreckage, police spokesman Shizuo Kawamura said.

Police called in personnel with better equipment to help rescue the woman, whom police found wrapped in several blankets, on top of a collapsed closet.

Grandmother and grandson were weak but conscious, having survived on the food they had in their refrigerator, Kawamura told The Associated Press by telephone. The earthquake and tsunami knocked out power and telephone service throughout the northeast coast.

National broadcaster NHK aired dramatic video of the rescue, which showed a stunned, though coherent, woman. She gave her name when asked.

"Are you hurt?" a rescuer said.

"No," she replied, and asked about her grandson.

Both she and Jin were taken to a nearby hospital.

A couple days after the disaster, an aunt asked police to search for the two. On Sunday, Jin's father, Akira Abe, told reporters gathered at the hospital that he had never given up hope.

"I always believed they were alive," he said.

The rescue offered Japan an uplifting piece of news amid colossal devastation and sadness with thousands of dead and missing. Still, Kawamura said he wasn't smiling.

"We have too many other victims to find to take the time to celebrate," he said.