The "coalition" has no clothes

The administration has insisted that the attack on Libya is a broad international effort -- but, so far, it's not 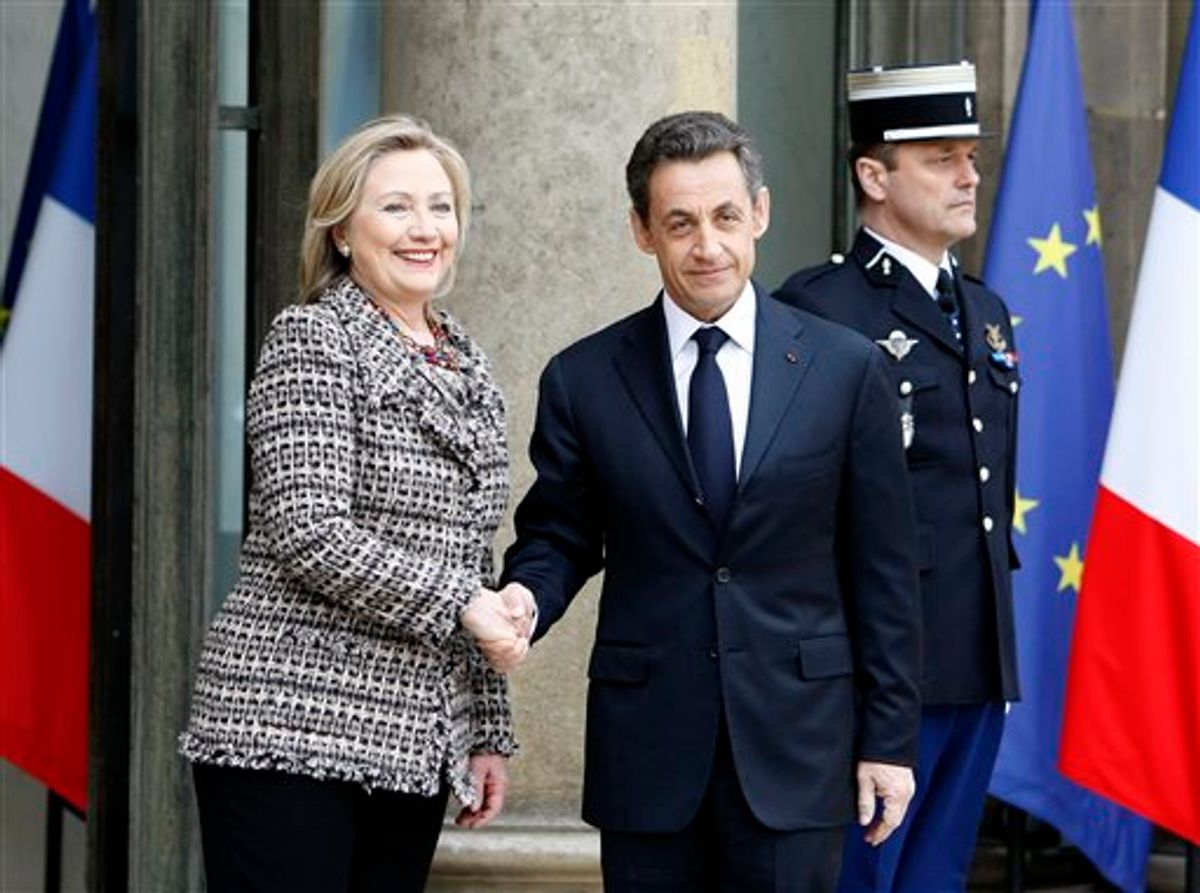 U.S Secretary of State Hillary Clinton, left, is welcomed by French President Nicolas Sarkozy for a crisis summit on Libya, at the Elysee palace in Paris, Saturday, March, 19, 2011. Britain and France took the lead in plans to enforce a no-fly zone over Libya on Friday, sending British warplanes to the Mediterranean and announcing a crisis summit in Paris with the U.N. and Arab allies. (AP photo/Remy de la Mauviniere) (AP)
--

An emphatic part of the White House messaging about the bombing in Libya is that the operation is truly international in character.

But it's quickly becoming clear that the bombing campaign -- at least so far -- is almost entirely an American operation, albeit one that has been packaged to give it an international look. It's a dissonance that brings back memories of George W. Bush's much-mocked "coalition of the willing."

The rhetoric from the administration has consistently referred to the U.S. playing a "support" role in a large coalition. As Hillary Clinton said yesterday in France, referring to the Security Council resolution that authorizes protection of civilians in Libya: "So let me be very clear about the position of the United States: We will support an international coalition as it takes all necessary measures to enforce the terms of Resolution 1973."

President Obama, in what was obviously a carefully choreographed move, did not himself announce the beginning of the bombing. Indeed, when the news was announced by French President Nicholas Sarkozy, Obama was on an uncanceled trip to Brazil.

Obama's brief statement from Brasilia referred to a "broad coalition" that "brings together many of our European and Arab partners." He said he had authorized "military action in Libya in support of an international effort." Obama used the words "international" and "coalition" a total of ten times in a statement that lasted just three minutes.

The grandstanding was left to Sarkozy, who had ordered French planes to make the first flights over Libya -- before U.S. aircraft got involved. "Along with our Arab, European and North American partners, France has decided to play its part before history," he said.

But strikes by over 100 American cruise missiles quickly followed the French action, and early Sunday morning a slew of American planes -- including B2s, F-15s, F-16s, Navy EA-18G electronic warfare planes and Marine attack jets, according to the AP -- bombed Libya. It's not clear whether any Arab nations -- some of which supported the Security council resolution -- have contributed military support at this point.

None of this to say that the international political support for the Libya intervention is not significant. But NBC Pentagon correspondent Jim Miklaszewski today knocked down the talk that what is going on militarily is a "huge coalition effort." Here's what he said in a remarkable segment this morning:

"Despite the White House attempts to make this look like it's a huge coalition effort -- obviously it required coalition political support -- but for now the U.S. military is not only in the lead but conducting almost all military operations, with only minor participation from the French, as you mentioned, even British fighters over night. There's a U.S. commander. And even this morning I talked to senior military officials, when I asked them how soon will the U.S. turn over the command to the coalition -- and the indication is the U.S. military is in no hurry to do that."

Adm. Mike Mullen, chairman of the Joint Chiefs of Staffs, this morning delivered a very different message than Miklaszewski's reporting suggests. Mullen insisted in a Sunday show interview that while the U.S. is "leading it now, we're looking to hand off that leadership in the next few days." It will be interesting to see if that happens.