Top Sarkozy advisor warns of a long fight in Libya 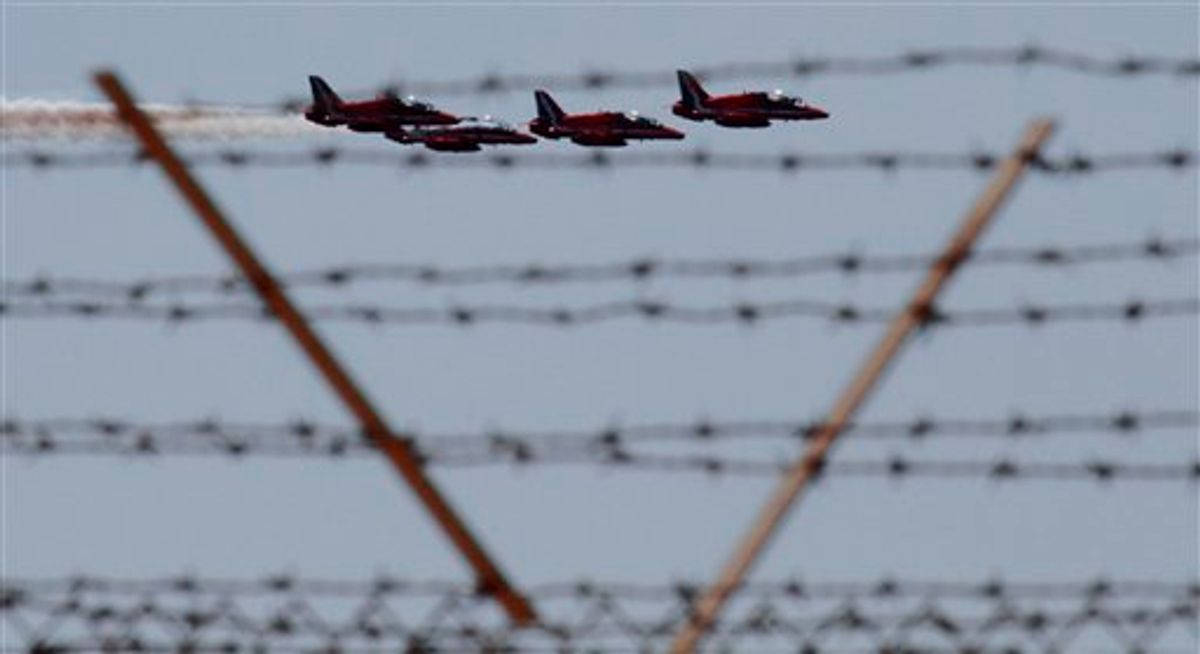 The international military intervention in Libya is likely to last "a while," a top French official said Monday, echoing Moammar Gadhafi's warning of a long war ahead as rebels, energized by the strikes on their opponents, said they were fighting to reclaim a city under siege from the Libyan leader's forces.

Burned-out tanks and personnel carriers littered the main desert road leading southwest from Benghazi, the rebel's capital in the east of the country -- the remains of a pro-Gadhafi force that had been besieging the city until it was pounded by international strikes the past two nights.

Rebel fighters in Benghazi had now pushed down that highway to the outskirts of the city of Ajdabiya, which pro-Gadhafi forces have surrounded and been pounding with artillery and strikes since last week. The rebels swept into the nearby oil port of Zwitina, just northeast of the city, which was also the scene of heavy fighting last week -- though now had been abandoned by regime forces. There, a power station hit by shelling on Thursday was still burning, its blackened fuel tank crumpled, with flames and black smoke pouring out.

Oil prices held above $102 a barrel after the second night of allied strikes in the OPEC nation raised fears of prolonged fighting that has already slowed Libyan oil production to a trickle.

Henri Guaino, a top adviser to the French president, said two nights of bombing runs and missile attacks had hobbled Libya's air defenses, stalled Gadhafi's troops and all but ended attacks on civilians. A cruise missile late Sunday blasted Gadhafi's residential compound near his iconic tent, and fighter jets destroyed a line of tanks moving on the rebel capital.

It was not known where Gadhafi was when the missile hit Sunday, but it seemed to show that he is not safe.

Guaino, asked how long the allied efforts would continue, replied simply: "A while yet."

The U.N. resolution authorizing international military action in Libya not only sets up a no-fly zone but allows "all necessary measures" to prevent attacks on civilians. Since the airstrikes began, the number of civilians fleeing Libya has decreased as Libyans in particular wait out the rapidly changing situation, the U.N. refugee agency said Monday.

It was a dramatic turnaround in Libya's month-old upheaval: For 10 days, Gadhafi's forces had been on a triumphant offensive against the rebel-held east, driving opposition fighters back with the overwhelming firepower of tanks, artillery, warplanes and warships. Last week, as rebels fell back, the stream of civilians crossing into Egypt alone reached 3,000 a day.

Then, after the no-fly zone was imposed Friday, the number fell to about 1,500 a day, said UNHCR spokeswoman Sybella Wilkes.

Mohammed Abdul-Mullah, a 38-year-old civil engineer from Benghazi who was fighting with the rebel force, said government troops stopped all resistance after the international campaign began.

"They were running, by foot and in small cars," he said. "The balance has changed a lot. But pro-Gadhafi forces are still strong. They are a professional military and they have good equipment. Ninety percent of us rebels are civilians, while Gadhafi's people are professional fighters."

Rebel fighters descending from Benghazi met no resistance as they moved to the outskirts of Ajdabiya. In a field of dunes several miles (kilometers) outside the city, around 150 fighters massed. Some stood on the dunes with binoculars to survey the positions of pro-Gadhafi forces sealing off the entrances of the city. Ajdabiya itself was visible, black smoke rising, apparently from fires burning from fighting in recent days.

"There are five Gadhafi tanks and eight rocket launchers behind those trees and lots of 4x4s," said one rebel fighter, Fathi Obeidi, standing on a dune and pointing at a line of trees between his position and the city.

Ghadafi forces have ringed the city's entrance and were battling with opposition fighters inside, rebels said. The plan is for the rebel forces from Benghazi "to pinch" the regime troops while "those inside will push out," Obeidi said.

New fighting also broke out Monday in Misrata, the last rebel-held city in western Libya, according to reports from Al-Jazeera and Al-Arabiya.

In Cairo, a group of Libyans angry at the international intervention in their homeland blocked the path of U.N. Secretary-General Ban Ki-moon following his meeting at the Arab League on Monday.

Ban had finished talks with the Arab League chief Amr Moussa and left the organization's headquarters in Cairo to walk around nearby Tahrir Square, the centerpiece of Egyptian uprising that last month toppled Hosni Mubarak, when dozens of Libyan protesters converged on him and his security detail.

The Libyans, carrying pictures of Gadhafi and banners critical of the United States and United Nation, blocked Ban's path, forcing him to return to the league and leave from another exit.

U.S., British and French planes went after tanks headed toward Benghazi, in the opposition-held eastern half of the country. On Sunday, at least seven demolished tanks smoldered in a field 12 miles (20 kilometers) south of Benghazi, many of them with their turrets and treads blown off, alongside charred armored personnel carriers, jeeps and SUVs of the kind used by Gadhafi fighters.

The U.S. military, for now at the lead of the international campaign, is trying to walk a fine line over the end game of the assault. It is avoiding for now any appearance that it aims to take out Gadhafi or help the rebels oust him, instead limiting its stated goals to protecting civilians.

Britain also is treading carefully. Foreign Secretary William Hague refused Monday to say if Gadhafi would or could be assassinated, insisting he would not "get drawn into details about what or whom may be targeted."

"I'm not going to speculate on the targets," Hague said in a heated interview with BBC radio. "That depends on the circumstances at the time."

A military official said Air Force B-2 stealth bombers flew 25 hours in a round trip from Whiteman Air Force Base in Missouri and dropped 45 2,000-pound bombs.

What happens if rebel forces eventually go on the offensive against Gadhafi's troops remains unclear.

Rebels defended their support of the international intervention into Libya -- apparently feeling the sting of criticism from other Libyans and Arabs who warned the country could be divided or collapse into a civil war.

"Libya will not turn into Somalia or Iraq. It will not be divided. We are battling -- the Libyan people -- are battling a gang of mercenaries," Mohammed al-Misrati, a rebel spokesman in the stronghold of Misrata, told Al-Jazeera on Monday.

U.S. Defense Secretary Robert Gates said late Sunday that the U.S. expects turn over control of the operation to a coalition headed by France, Britain or NATO "in a matter of days," reflecting concern that the U.S. military was stretched thin by its current missions. Turkey was blocking NATO action, which requires agreement by all 28 members of the alliance.