The Republican Jewish Coalition organizes candidates' trips to the region, but someone wouldn't return its calls 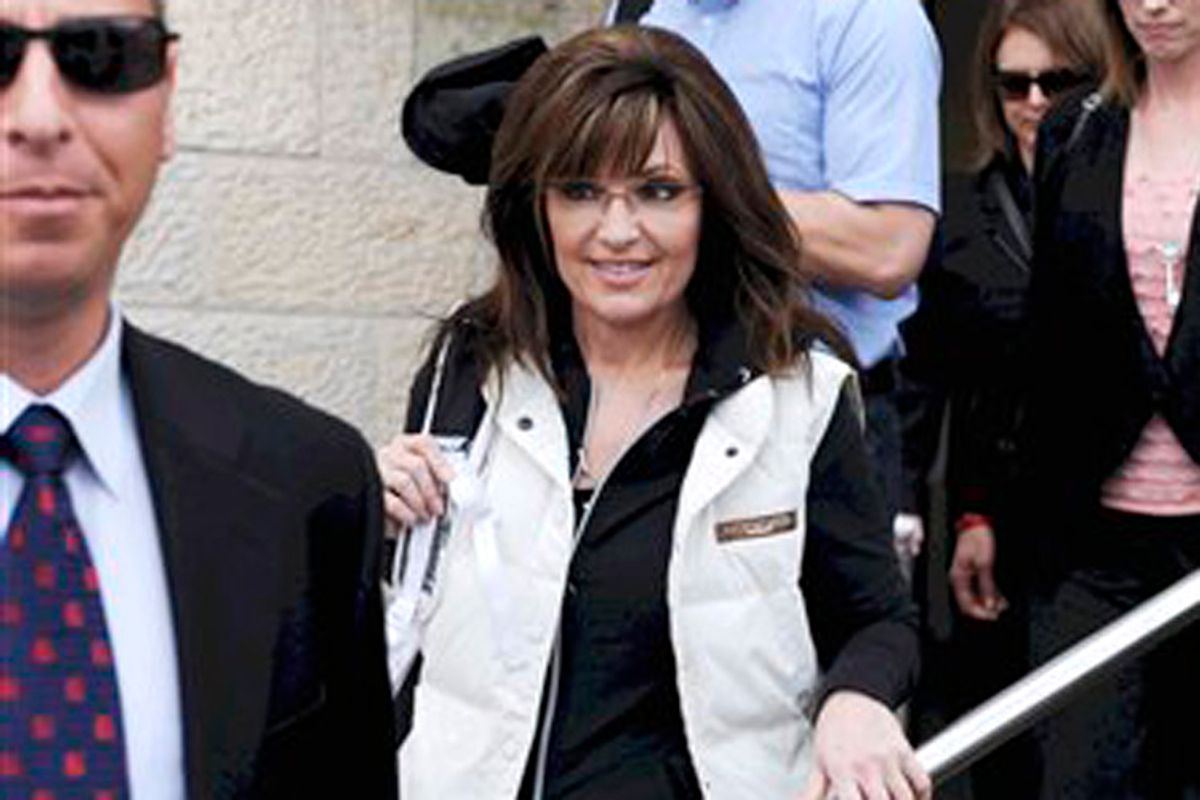 Former Alaska Gov. Sarah Palin arrives at Ben Gurion airport near Tel Aviv, Israel, Sunday, March 20, 2011. Palin is in Israel on a trip that has raised speculation she is honing her foreign policy credentials ahead of a run for the U.S. presidency next year. Palin arrived in Israel Sunday afternoon after a stop in India. (AP Photo/Yuval Chen) ISRAEL OUT (Yuval Chen)
--

Sarah Palin's trip to Israel -- which has been covered a bit more extensively by the press than her trip to India -- has been a fairly predictable exercise. She said hawkish things and told high-ranking members of the Likud party that they should "stop apologizing" and she'll dine with Benjamin Netanyahu and she has repeatedly announced that she's on Team Jewish People when it comes to the various disagreements in the region.

There was the odd moment when Palin and her entourage stopped at a checkpoint south of Jerusalem and then turned around and drove off without talking to anyone, but otherwise the trip has resembled the trips every other would-be Republican candidate takes from start to finish.

Except, as David Frum writes, that she apparently snubbed the Republican Jewish Coalition, one of those terribly important but little-known groups that helps to pick the candidates every four years. The RJC is the organization that arranges and organizes Israel trips for GOP candidates. It has been for years. The group has 40,000 members and raises a ton of money. The only major GOP figure who doesn't arrange trips to Israel through the RJC is Mike Huckabee, who is hardly an establishment candidate.

But Sarah Palin doesn't like the RJC, because some of its board members -- including David Frum -- have said mean things about her:

Over the months since November 2008, the RJC had repeatedly offered to organize an Israel tour for Palin. They have repeatedly invited Palin to speak at their meetings. As a member of the RJC board, I know that Palin's team engaged in extended conversations about these invitations. Yet they were abruptly shelved. The RJC organization learned that its invitation would not be accepted the same way everybody else did: by reading the newspaper.

Why? We cannot know for certain. But we do know this: Some members of the RJC board -- including me, and one or two others -- have publicly said critical things about Palin.

The seeming result: Palin decided the RJC was dead to her.

Sarah Palin can't even do the routine Israel trip without pissing off some important would-be ally. This is more evidence that if Sarah Palin is serious about running for president, she's not going about it in the traditional -- which is to say "professional" -- manner. It'll just be her and her crack team of loyalists, led by Todd, against the establishment and the world.