Are moms to blame for provocatively dressed teens? 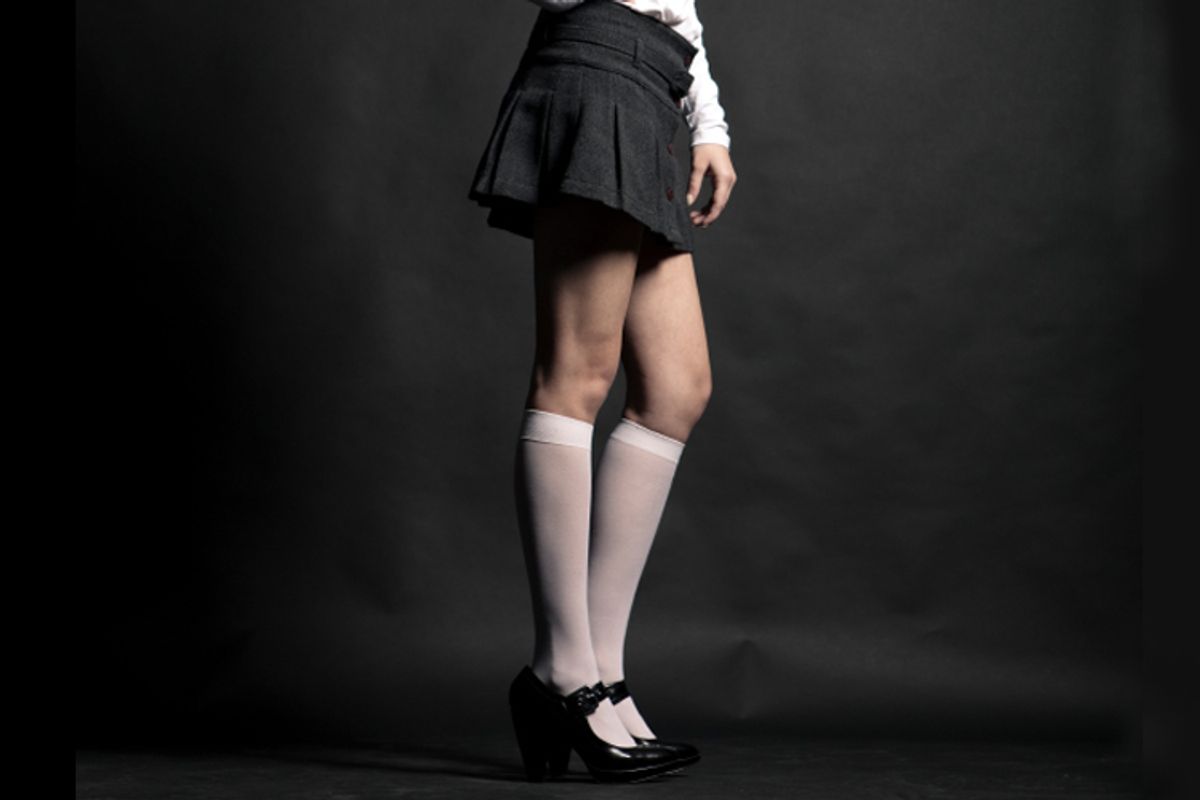 Watch out, little girls. High heels cause sluttiness -- and a lifetime of regret. But it's not your fault if you don't know that yet. It's your mom's.

In yet another button-pushing, lady-blaming screed in the Wall Street Journal -- the folks who first introduced us to the Tiger Mother -- this weekend, author Jennifer Moses raged against letting our daughters "dress like prostitutes" -- and the consequences of untrammeled slatternliness. She opens with a group of 12- and 13-year-old girls tarting up for a local bat mitzvah, erroneously leaps to the conclusion that "promiscuity has hit new heights" and quickly theorizes why. It's because her generation of mothers is the first "not only to be free of old-fashioned fears about our reputations but actually pressured by our peers and the wider culture to find our true womanhood in the bedroom." Oh, the wages of liberty! The rueful Moses goes on to say, "Not all of us are former good-time girls now drowning in regret -- I know women of my generation who waited until marriage -- but that's certainly the norm among my peers." Apparently, 50 years after the sexual revolution, the only options for women regarding their sex lives are chastity or regret -- or worse.

Moses' grim Op-Ed calls to mind an even bleaker New York Times story earlier this month -- one that conspicuously observed the attire of an 11-year-old gang rape victim in Texas. Locals noted she "dressed older than her age, wearing makeup and fashions more appropriate to a woman in her 20s." That kind of horrendous judgment of girls – and the "What'd you expect?" response -- was then echoed last week when Naples Republican Rep. Kathleen Passidomo said, regarding a proposed dress code bill: "There was an article about an 11-year-old girl who was gang-raped in Texas by 18 young men because she was dressed like a 21-year-old prostitute. And her parents let her attend school like that. And I think it’s incumbent upon us to create some areas where students can be safe in school and show up in proper attire so what happened in Texas doesn’t happen to our students."

In her Journal piece, Jennifer Moses doesn't suggest that girls who dress up are inviting sexual assault, but it's unfortunate timing that she uses so much of the same anguished language: the implication that girls today are dolled up like "prostitutes," the dire warnings of consequences for those who do. In a video clip accompanying the piece, she mulls the question of whether "young girls are dressing too provocatively" and concludes, "Well, most of them are." Whaaaa? Maybe in the private schools of the Upper East Side, and I'd argue not even there. But look around, Moses -- they're called sweat pants, and they're EVERYWHERE.

I'm not saying the pressures to look and act hot -- along with the dubious badges of "skank" if you do -- aren't real, or that they haven't trickled right down to middle school. A girl's virtue has been considered a precious commodity since time immemorial. That time in her life when she is, per Britney, not a girl, not yet a woman, holds endless fascination in the popular imagination. As a parent, I know tween girls who openly admit they want to be "sexy," who talk about their diets and the "hot" outfits they covet from H&M.

But that behavior doesn't bum me out because I fear those girls are on a path to becoming assault victims or, in the words of Moses, "the campus mattress" -- girls who will "need therapy more than you need condemnation." It's depressing because it suggests to me that the same little girls who, when they were younger, were excited about their accomplishments are already learning to value themselves based on how others respond to them. It troubles me because when a girl's worth is tied to her sexiness by the time she's 12, it's hard for her to then be esteemed by her peers, by Florida Republicans, and by Wall Street Journal writers quick to point out that she's dressing like a "prostitute."

And it saddens me that an entire generation of terrific, bright kids who have a variety of interests and a broad range of clothing styles -- and their moms -- are being tarred with the slut brush because others are still reeling with shame for their own youthful choices. Poor guilt-wracked Moses reveals a great deal when she writes, "I don't know one of them who doesn't have feelings of lingering discomfort regarding her own sexual past. And not one woman I've ever asked about the subject has said that she wishes she'd 'experimented' more." Yikes. It may be true for Moses, but what a crappy message to relay to mothers and daughters. And it's one that takes boys and men -- and their own behavior -- utterly for granted. It ignores the truth that most males aren't predators; eager to lead some lipstick-sporting girl into an encounter she'll be sorry for tomorrow.

I understand the potentially devastating consequences of sex. I grew up the fatherless result of an unplanned pregnancy. I've spent the last few years trying to stave off cervical cancer, because of an old case of HPV. But it's ironic to me that Moses displays exactly the kind of wrongheaded thinking she seeks to dispel: the notion that female sexuality boils down to something to be given away, either lavishly or with extreme caution. That mind-set reduces, yet again, girls to the role of gatekeepers of male sexuality rather than participants in their own. And I'm here to say that if you think, instead, of sex as something to be shared with another person, someone who has a different yet equally legitimate set of desires, the whole thing gets a whole less neurotic and scary fast.

As they grow up, I don't want my own tween daughters to ever believe that their sexuality is a performance, or that how they feel about themselves and their partners is tied to how provocative they look or act. I want them to value themselves and their peers -- to not judge other girls as skanks, to not view boys as those creatures whom they have to guard against at all times. I want them to believe that their sexuality isn't something to be afraid of, to be doled out stingily and grudgingly. I want them to know it's not the length of your skirt that matters; it's what's going on between your ears. And I wish someday for my daughters -- and their friends, both the girls and the boys -- what plenty of us not named Jennifer Moses have been able to achieve: a lifetime of healthy self-esteem, varied experiences and zero regret.