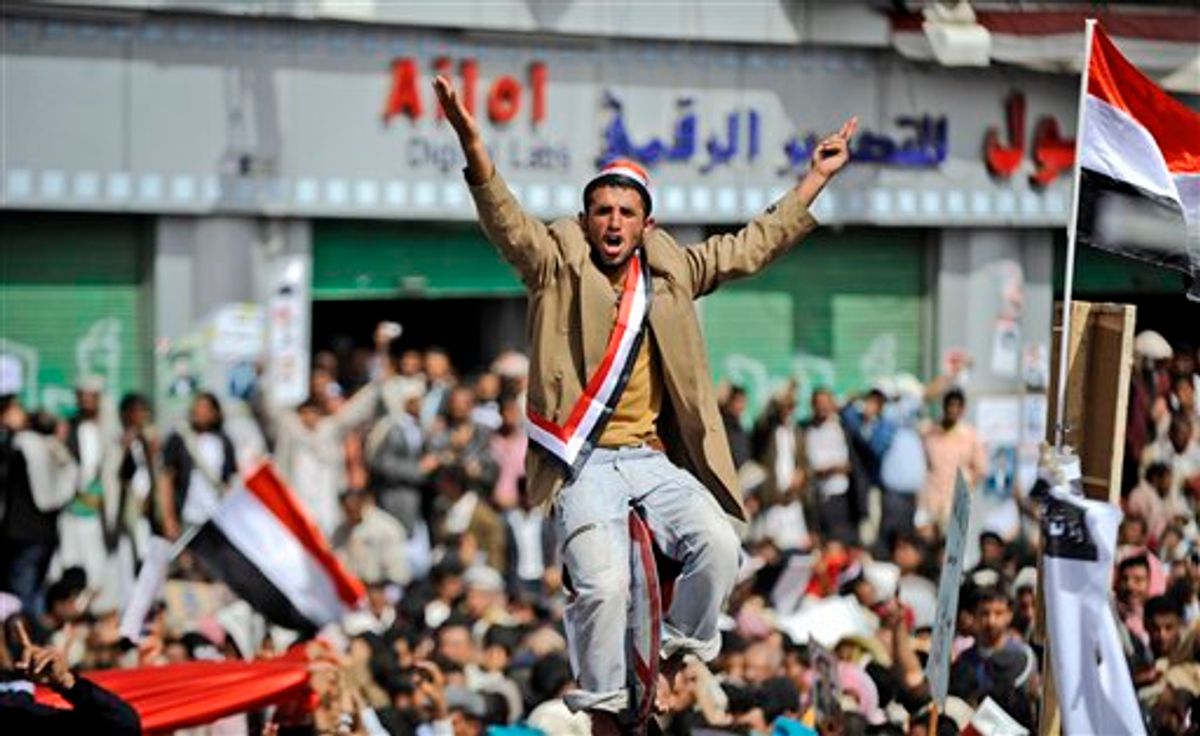 An anti-government protestor sitting on a traffic sign reacts as the bodies of demonstrators who were killed on Friday's clashes with Yemeni security forces, arrive during their funeral procession in Sanaa,Yemen, Sunday, March 20, 2011. The Yemeni president's own tribe has called on him to step down after a deadly crackdown on protesters, robbing the embattled U.S.-backed leader of vital support in a society dominated by blood ties. (AP Photo/Hani Mohammed) (AP)
--

Rival tanks deployed in the streets of Yemen's capital Monday after three senior army commanders defected to a movement calling for the ouster of the U.S.-backed president, radically depleting his support among the country's most powerful institutions.

Maj. Gen. Ali Mohsen al-Ahmar, commander of the army's powerful 1st Armored Division, announced his defection in a message delivered by a close aide to protest leaders at the Sanaa square that has become the epicenter of their movement.

Some of the division's tanks and armored vehicles then deployed in the square, which protesters have occupied for more than a month to call for the resignation of President Ali Abdullah Saleh after 32 years in power. An increasingly violent crackdown on the demonstrations escalated dramatically on Friday when Saleh's forces opened fire from rooftops, killing more 40 in an assault that caused much of his remaining power base to splinter.

Saleh, who has cooperated closely with a U.S.-backed offensive against his nation's branch of al-Qaida, looked to be far closer to what analysts increasingly have called inevitable: a choice between stepping down or waging a dramatically more violent campaign against his opponents.

At least a dozen tanks and armored personnel carriers belonging to the Republican Guards, an elite force led by Saleh's son and one-time heir apparent, Ahmed, were deployed outside the presidential palace on Sanaa's southern outskirts, according to witnesses.

A senior opposition leader said contacts were underway with the president over a peaceful way out of the ongoing crisis. One option under discussion, he said, was for Saleh to step down and a military council takes over from him to run the country till presidential and legislative elections are held.

The leader, who spoke on condition of anonymity because of the sensitivity of the contacts, declined to say how much progress the talks have made, but gave 48 hours as the likely timeframe for a breakthrough.

Saleh appeared to be retaining the loyalty of at least some of Yemen's military, however.

Defense Minister Mohammed Nasser Ahmed said on television that the armed forces remained loyal to the president and would counter any plots against "constitutional legitimacy" and "democracy."

Ahmed spoke after a meeting of the National Defense Council, which is led by Saleh and includes the prime minister, the defense and information ministers as well as the intelligence chief.

Saleh also sent a message via his foreign minister to King Abdullah of Saudi Arabia, Yemen's powerful neighbor and the on-and-off backer of the Yemeni leader. The contents of the message were not known.

All three army officers who defected belong to Saleh's Hashid tribe and a tribal leader said it was rallying behind Maj. Gen. al-Ahmar as a possible replacement for Saleh, eager to keep the president's job for one of its own.

The leader spoke on condition of anonymity because of the sensitivity of the subject.

Regional TV stations reported that dozens of army commanders and politicians were joining the opposition, but there was no immediate independent confirmation.

Saleh fired his entire Cabinet Sunday ahead of what one government official said was a planned mass resignation, a series of ambassador have quit in protest and Sadeq al-Ahmar, the chief of the Hashid tribe, said Monday that he too was joining the opposition.

Maj. Gen. al-Ahmar has been close to Saleh for most of the Yemeni president's years in power. He has close associations with Islamist groups in Yemen that are likely to raise suspicions in the West about his willingness to effectively fight al-Qaida operatives active in the country.

He is a veteran of the 1994 civil war that saw Saleh's army suppress an attempt by southern Yemen to secede. Al-Ahmar also fought in recent years against Shiite rebels in the north of the country.

His defection to the opposition was welcomed by protesters, but the warm reception may not guarantee him a political career in a post-Saleh Yemen given his close links to the president.

Popular among troops and viewed as a seasoned field commander, al-Ahmar also has widely been seen as a rival to the president and his son, who saw him as a threat to him succeeding his father.

Speaking to Qatar-based Al-Jazeera television from Sanaa, al-Ahmar said the death of scores of protesters at the hands of security forces on Friday made him decide to back the opposition after weeks of trying to mediate between Saleh and the protesters.

The two other officers who announced their defection were Mohammed Ali Mohsen and Hameed al-Qusaibi, who both have the rank of brigadier. Yemen's ambassadors to Jordan, Syria and parliament's deputy speaker also announced Monday they were supporting the opposition, further undermining Saleh's weakening authority.

Saleh and his weak government have faced down many serious challenges, often forging fragile alliances with restive tribes to extend power beyond the capital, Sanaa. Most recently, he has battled a seven-year armed rebellion in the north, a secessionist movement in the south, and an al-Qaida offshoot that is of great concern to the U.S.

Al-Qaida in the Arabian Peninsula, which formed in January 2009, has moved beyond regional aims and attacked the West, including sending a suicide bomber who came tried to down a U.S.-bound airliner with a bomb sewn into his underwear. The device failed to detonate properly.

Yemen is also home to U.S.-born radical cleric Anwar al-Awlaki, who is believed to have offered inspiration to those attacking the U.S., including Army Maj. Nidal Hasan, who is accused of killing 13 people and wounding dozens in a 2009 shootout at Fort Hood, Texas.