"Memento," "Donnie Darko," "Mulholland Drive." The link between them may go deeper than their release dates 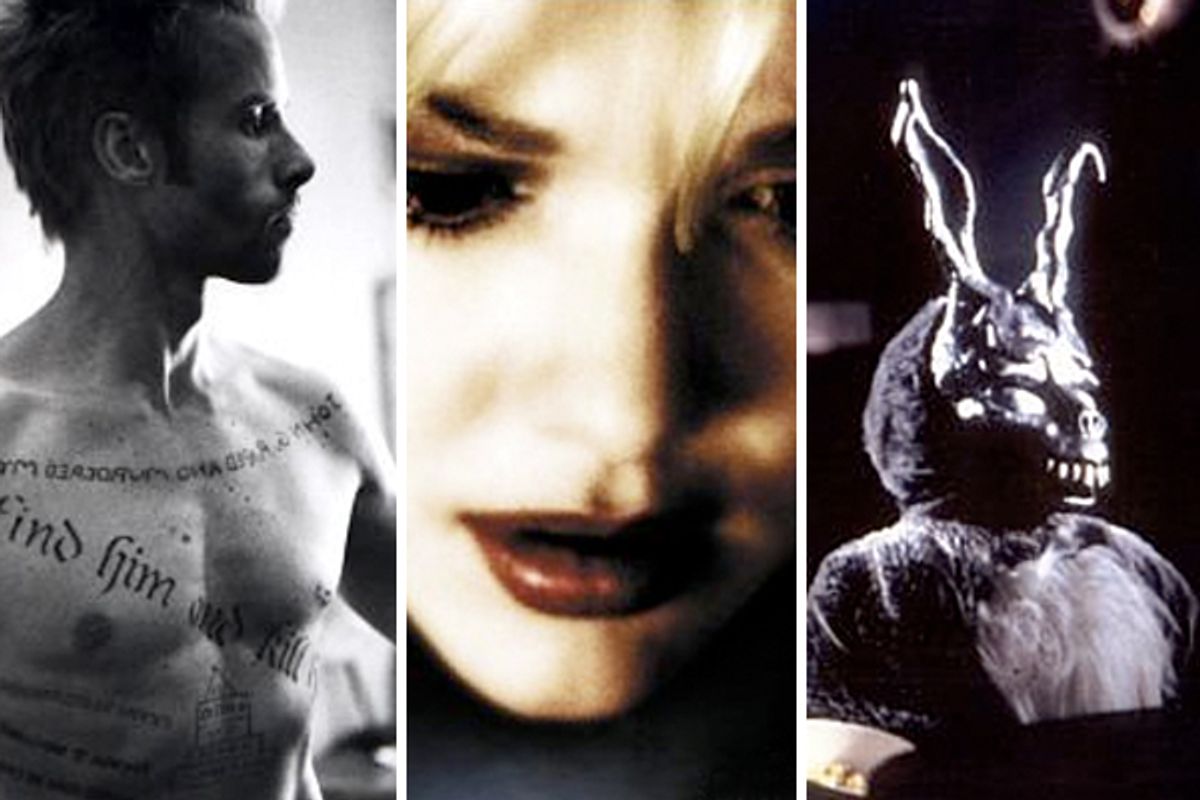 In 2001, DVD players outsold VCRs for the first time ever. I can't claim that this advent of home technology was the reason that "puzzle films" like Christopher Nolan's "Memento," David Lynch's "Mulholland Drive" and Richard Kelly's "Donnie Darko" caught on, but it's a reasonably sound guess. With VCRs, you could watch a film at home, you could pause it, and you could rewind it. But DVDs were made to withstand intense scrutiny: high-res freeze-frames, replaying and jumping chapters, and of course those neat little bonus features that held the promise of providing supplemental material to the film.

Before "Memento" was released to the public on March 16, 2001, the most popular thriller mysteries of the past several years had been films like "The Sixth Sense" and "The Usual Suspects." Both great movies, sure, but both included clear expository endings to make sure the audiences understood what the hell they had just paid good money to see. But when Andy Klein wrote his definitive "Everything You Wanted to Know About 'Memento'" essay for Salon and created a numerical and alphabetical system to use to watch the scenes of the film in chronological order, it was only because DVDs had recently given us the ability to do so. As Andy says:

So, if you want to look at the story as it would actually transpire chronologically, rather than in the disjointed way Nolan presents it -- oh, will this ever be fun to do on DVD! -- you would watch the black-and-white scenes in the same order (1 to 21), followed by the black-and-white/color transition scene (22/A). You would then have to watch the remaining color scenes in reverse order, from B up to V, finishing with the opening credit sequence, in which we see Teddy meet his maker at Leonard's hands:

But maybe that's getting overly technical for someone who just wanted to know what just happened. Even then, DVDs allowed a much more complex film to gain a second life. "Donnie Darko," the first film by writer/director Richard Kelly, owes its cult success even more to DVDs than "Memento" does: When the film came out in October of 2001 (starring two unknown siblings, Jake and Maggie Gyllenhaal), it was practically buried in theaters. No one saw it, no one I knew had even heard of it. But when it came out on DVD, it was a revelation, a terrifying 6-foot-tall rabbit whispering about the apocalypse while a Sparkle Motion dance team headed up by Patrick Swayze and his kiddie porn dungeon danced in the background, an honest to god revelation.

What the hell was this movie about? Time travel? Schizophrenia? Was everything a clue -- from the movies being shown in the theater where Donnie goes on his date to the numbers written on his arm after he wakes up in a golf field? Or was the point that it was all meaningless, that no sense could be made of the seemingly "Act of God" tragedies that bookended the film? (One of the reasons "Donnie Darko" didn't fare well in theaters may have been its two plane crash sequences coming just one month after Sept. 11). My friends and I would gather for weekly rewatchings of "Darko" and discuss its possible meanings the way intense rabbinical students would parse the Torah.

Three years later, when "Donnie Darko" finally got a "Special Director's Cut" DVD that allowed you access not only to extra scenes but also to chapters of the book "The Philosophy of Time Travel" (a fictionalized text written by one of the characters in the movie), it was something of a coup for our super-fandom. As Dan Kois writes in his definitive Salon essay on the film's plot, "Years of midnight screenings at theaters around the country and the film's impressive success on DVD -- taking in more than $10 million to date in U.S. sales alone -- have turned what was once a confusing and oblique failure into a confusing and oblique cult hit."

Which brings us to "Mulholland Drive," perhaps the least-sensical of all the puzzle films to come out that year. David Lynch isn't one for wrapping his stories in a nice, neat package (no matter how many times you rewatch the DVD of "Lost Highway" or "Eraserhead," that shit isn't going to be any less confusing), and the evolution of the film -- from a failed ABC pilot to a mainstream theatrical release -- lent the mysterious movie a sprawling quality that really couldn't be explained by a 15-minute ending that was tacked on after the show was nixed. (Everything that happens after Naomi Watt's character opens the blue box was created specifically to give the show a movie ending.) To make matters worse, Lynch refused to put chapters on his DVD, so there was no jumping back and forth between scenes like you could do with "Memento," and there was no bonus text to explain the film, as with "Donnie Darko." But that didn't stop thousands of people from trying, and the film received its own analysis in Salon by Bill Wyman, Max Garrone and Andy Klein. In fact, their explanation of the film that confused so many people can be whittled down to two paragraphs:

The dream begins with Camilla/Rita miraculously escaping the hit Diane had taken out on her. From there, Diane, a product of Hollywood, imagines the story in cinematic fashion: She sees herself as the naive wannabe starlet Betty, who succeeds on sheer talent and solves whatever problems are thrown her way. She even gets the girl!"

It's possible that films like "Mulholland Drive" would have become cult classics even without DVD treatment, but Lynch is the special case of a cult cinema director. For Nolan and Kelly, their 2001 puzzle films helped launch careers that would have been impossible if their complex visions had to be compromised for the sake of making sense the first time around. Could you imagine a world without "Inception" or "Southland Tales"? OK, maybe the latter, although Kelly's second feature is highly underrated. Maybe you need to go back and watch it again. It's out on DVD right now.