Taylor Anderson, a 24-year-old English teacher, survived the earthquake only to drown in the tsunami 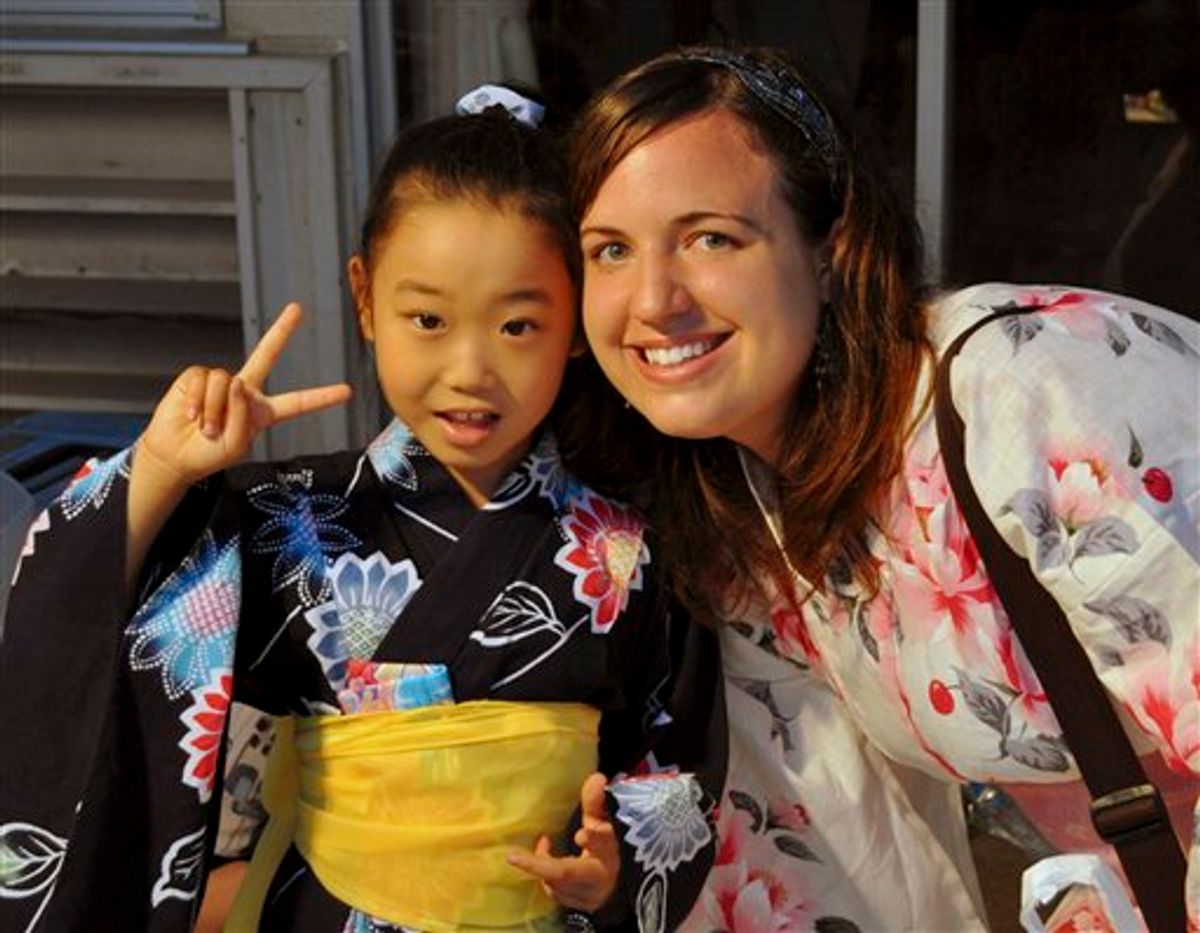 In this July 17, 2010 photo provided the Anderson family, Taylor Anderson, right, poses with one of her students in Ishinomaki, Japan, where she taught English. Anderson's family said in a statement that the U.S. Embassy in Japan on Monday, March 21, 2011 informed them by telephone of the discovery of their 24-year-old daughter's body. (AP Photo/Anderson Family) NO SALES (AP)
--

A Virginia couple is mourning the death of their daughter after learning that her body was found in disaster-ravaged Japan, where she had been teaching English.

Taylor Anderson, 24, could be the first known American victim in the Japan disaster as authorities continue the daunting task of finding and identifying almost 13,000 people believed to be missing.

Anderson's family said in a statement that the U.S. Embassy in Japan called them Monday to tell them she was found in Ishinomaki, a city about 240 miles (390 kilometers) north of Tokyo.

Officials with U.S. Embassy in Japan and the State Department could not immediately confirm whether she was the first known U.S. victim in Japan. Another 25-year-old man is presumed dead after being swept into the ocean March 11 by a swell from the tsunami on the northern California coast.

"We would like to thank all those whose prayers and support have carried us through this crisis," said Andy and Jean Anderson, who live in Chesterfield County south of Richmond. "Please continue to pray for all who remain missing and for the people of Japan. We ask that that you respect our privacy during this hard time."

Jean Anderson said her daughter was last seen after the earthquake riding her bike away from an Ishinomaki elementary school after making sure parents picked up their children. A tsunami struck shortly after the earthquake, completely wiping out homes and other structures.

Friends and relatives used Facebook and other social networks to spread the word about the search for Taylor. Officials first told the family last Tuesday that their daughter had been located, but the Andersons learned that night that the information was incorrect.

Taylor Anderson had a lifelong love of Japan and began studying the language in middle school. She moved overseas after graduating from Randolph-Macon College in 2008 to teach in the Japan Exchange and Teaching Programme.

She taught in eight schools in Ishinomaki, in the Miyagi prefecture on Japan's northeast coast. During her stay there she developed a love for her students and for the Japanese people, her mother said.

She was scheduled to return to the United States in August.