The manipulative pro-war argument in Libya

Accusing war opponents of indifference to suffering is a common, and ironic, tactic used to justify wars 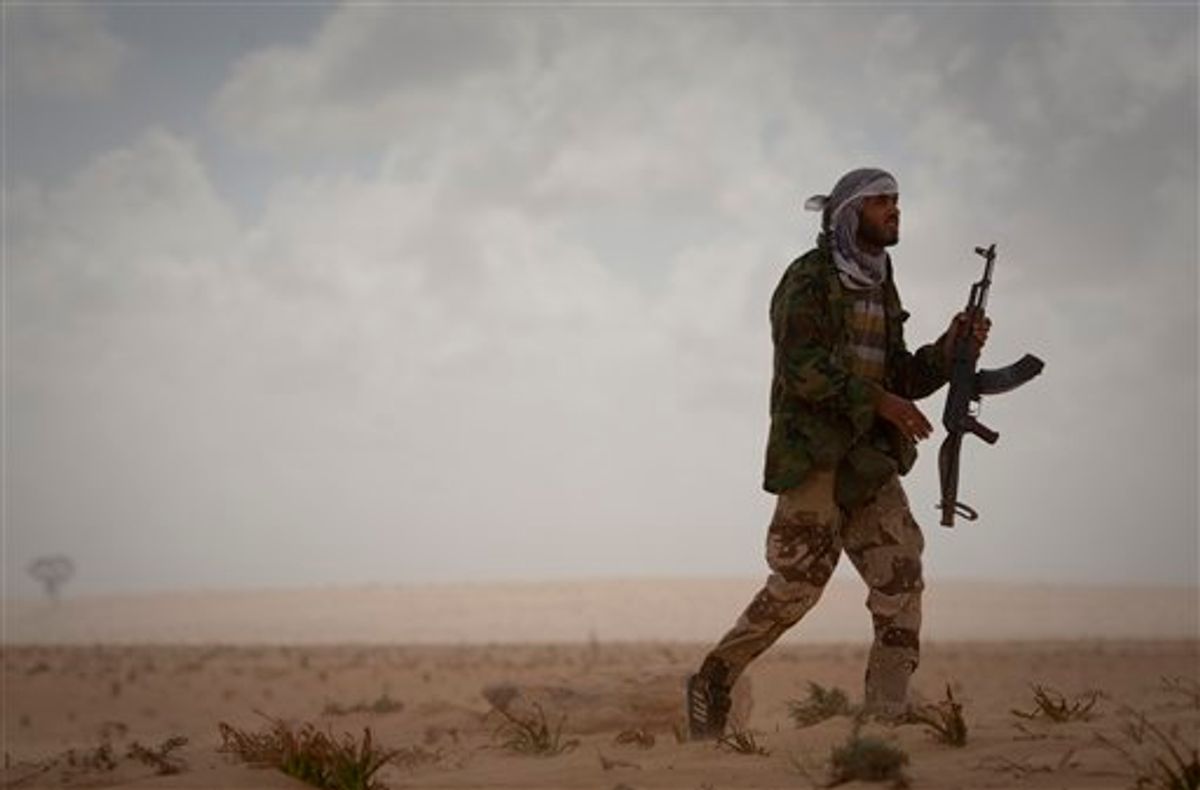 A Libyan rebel patrols the frontline of the outskirts of the city of Ajdabiya, south of Benghazi, eastern Libya, Monday, March 21, 2011. The international military intervention in Libya is likely to last "a while," a top French official said Monday, echoing Moammar Gadhafi's warning of a long war ahead as rebels, energized by the strikes on their opponents, said they were fighting to reclaim a city under siege from the Libyan leader's forces.(AP Photo/Anja Niedringhaus) (AP)
--

Advocating for the U.S.'s military action in Libya, The New Republic's John Judis lays out the argument which many of his fellow war advocates are making: that those who oppose the intervention are guilty of indifference to the plight of the rebels and to Gadaffi's tyranny:

So I ask myself, would these opponents of U.S. intervention (as part of U.N. Security Council approved action), have preferred:

(1) That gangs of mercenaries, financed by the country’s oil wealth, conduct a bloodbath against Muammar Qaddafi’s many opponents?

(2) That Qaddafi himself, wounded, enraged, embittered, and still in power, retain control of an important source of the world’s oil supply, particularly for Europe, and be able to spend the wealth he derives from it to sow discord in the region?

(3) And that the movement toward democratization in the Arab world -- which has spread from Tunisia to Bahrain, and now includes such unlikely locales as Syria -- be dealt an enormous setback through the survival of one of region's most notorious autocrats?

If you answer "Who cares?" to each of these, I have no counter-arguments to offer, but if you worry about two or three of these prospects, then I think you have to reconsider whether Barack Obama did the right thing in lending American support to this intervention.

Why didn't this same moral calculus justify the attack on Iraq? Saddam Hussein really was a murderous, repressive monster: at least Gadaffi's equal when it came to psychotic blood-spilling. Those who favored regime change there made exactly the same arguments as Judis (and many others) make now for Libya: it's humane and noble to topple a brutal dictator; using force is the only way to protect parts of the population from slaughter (in Iraq, the Kurds and Shiites; in Libya, the rebels); it's not in America's interests to allow a deranged despot (or his deranged sons) to control a vital oil-rich nation; and removing the tyrant will aid the spread of freedom and democracy in the Middle East. Why does that reasoning justify war in Libya but not Iraq?

In Foreign Policy, Stephen Walt argues that "liberal interventionists" and neocons share most of the same premises about America's foreign policy and its role in the world, with the sole exception being that the former seek to act through international institutions to legitimize their military actions while the latter don't. Strongly bolstering Walt's view is this morning's pro-war New York Times Editorial, which ends this way:

Libya is a specific case: Muammar el-Qaddafi is erratic, widely reviled, armed with mustard gas and has a history of supporting terrorism. If he is allowed to crush the opposition, it would chill pro-democracy movements across the Arab world.

Wasn't all of that at least as true of Saddam Hussein? Wasn't that exactly the "humanitarian" case made to justify that invasion? And wasn't that exactly the basis for the accusation against Iraq war opponents that they were indifferent to Saddam's tyranny -- i.e., if you oppose the war to remove Saddam, it means you are ensuring that he and his sons will stay in power, which in turn means you are indifferent to his rape rooms and mass graves and are willing to stand by while the Iraqi people suffer under his despotism? How can the "indifference-to-suffering" accusation be fair when made against opponents of the Libya war but not when made against Iraq war opponents?

But my real question for Judis (and those who voice the same accusations against Libya intervention opponents) is this: do you support military intervention to protect protesters in Yemen, Bahrain, Saudi Arabia and other U.S. allies from suppression, or to stop the still-horrendous suffering in the Sudan, or to prevent the worsening humanitarian crisis in the Ivory Coast? Did you advocate military intervention to protect protesters in Iran and Egypt, or to stop the Israeli slaughter of hundreds of trapped innocent civilians in Gaza and Lebanon or its brutal and growing occupation of the West Bank?

If not, doesn't that necessarily mean -- using this same reasoning -- that you're indifferent to the suffering of all of those people, willing to stand idly by while innocents are slaughtered, to leave in place brutal tyrants who terrorize their own population or those in neighboring countries? Or, in those instances where you oppose military intervention despite widespread suffering, do you grant yourself the prerogative of weighing other factors: such as the finitude of resources, doubt about whether U.S. military action will hurt rather than help the situation, cynicism about the true motives of the U.S. government in intervening, how intervention will affect other priorities, the civilian deaths that will inevitably occur at our hands, the precedents that such intervention will set for future crises, and the moral justification of invading foreign countries? For those places where you know there is widespread violence and suffering yet do not advocate for U.S. military action to stop it, is it fair to assume that you are simply indifferent to the suffering you refuse to act to prevent, or do you recognize there might be other reasons why you oppose the intervention?

In the very same Editorial where it advocates for the Libya intervention on the grounds of stopping government violence and tyranny, The New York Times acknowledges about its pro-intervention view: "not in Bahrain or Yemen, even though we condemn the violence against protesters in both countries." Are those who merely "condemn" the violence by those two U.S. allies but who do not want to intervene to stop it guilty of indifference to the killings there? What rationale is there for intervening in Libya but not in those places? In a very well-argued column, The Washington Post's Eugene Robinson today provides the only plausible answer:

Anyone looking for principle and logic in the attack on Moammar Gaddafi's tyrannical regime will be disappointed. . . . Why is Libya so different? Basically, because the dictators of Yemen, Bahrain and Saudi Arabia -- also Jordan and the Persian Gulf sheikdoms, for that matter -- are friendly, cooperative and useful. Gaddafi is not. . . .

Gaddafi is crazy and evil; obviously, he wasn’t going to listen to our advice about democracy. The world would be fortunate to be rid of him. But war in Libya is justifiable only if we are going to hold compliant dictators to the same standard we set for defiant ones. If not, then please spare us all the homilies about universal rights and freedoms. We'll know this isn’t about justice, it's about power.

I understand -- and absolutely believe -- that many people who support the intervention in Libya are doing so for good and noble reasons: disgust at standing by and watching Gadaffi murder hundreds or thousands of rebels. I also believe that some people who supported the attack on Iraq did so out of disgust for Saddam Hussein and a desire to see him removed from power. It's commendable to oppose that type of despotism, and I understand -- and share -- the impulse.

But what I cannot understand at all is how people are willing to believe that the U.S. Government is deploying its military and fighting this war because, out of abundant humanitarianism, it simply cannot abide internal repression, tyranny and violence against one's own citizens. This is the same government that enthusiastically supports and props up regimes around the world that do exactly that, and that have done exactly that for decades.

By all accounts, one of the prime administration advocates for this war was Hillary Clinton; she's the same person who, just two years ago, said this about the torture-loving Egyptian dictator: "I really consider President and Mrs. Mubarak to be friends of my family." They're the same people overseeing multiple wars that routinely result in all sorts of atrocities. They are winking and nodding to their Yemeni, Bahrani and Saudi friends who are doing very similar things to what Gadaffi is doing, albeit (for now) on a smaller scale. They just all suddenly woke up one day and decided to wage war in an oil-rich Muslim nation because they just can't stand idly by and tolerate internal repression and violence against civilians? Please.

For the reasons I identified the other day, there are major differences between the military actions in Iraq and Libya. But what is true of both -- as is true for most wars -- is that each will spawn suffering for some people even if they alleviate it for others. Dropping lots of American bombs on a country tends to kill a lot of innocent people. For that reason, indifference to suffering is often what war proponents -- not war opponents -- are guilty of. But whatever else is true, the notion that opposing a war is evidence of indifference to tyranny and suffering is equally simple-minded, propagandistic, manipulative and intellectually bankrupt in both the Iraq and Libya contexts. And, in particular, those who opposed or still oppose intervention in Bahrain, Yemen, Egypt, Iraq, the Sudan, against Israel, in the Ivory Coast -- and/or any other similar places where there is widespread human-caused suffering -- have no business advancing that argument.