The first broken promise of the Libyan war?

Mike Mullen claimed Sunday the U.S. would hand over control in "a few days" 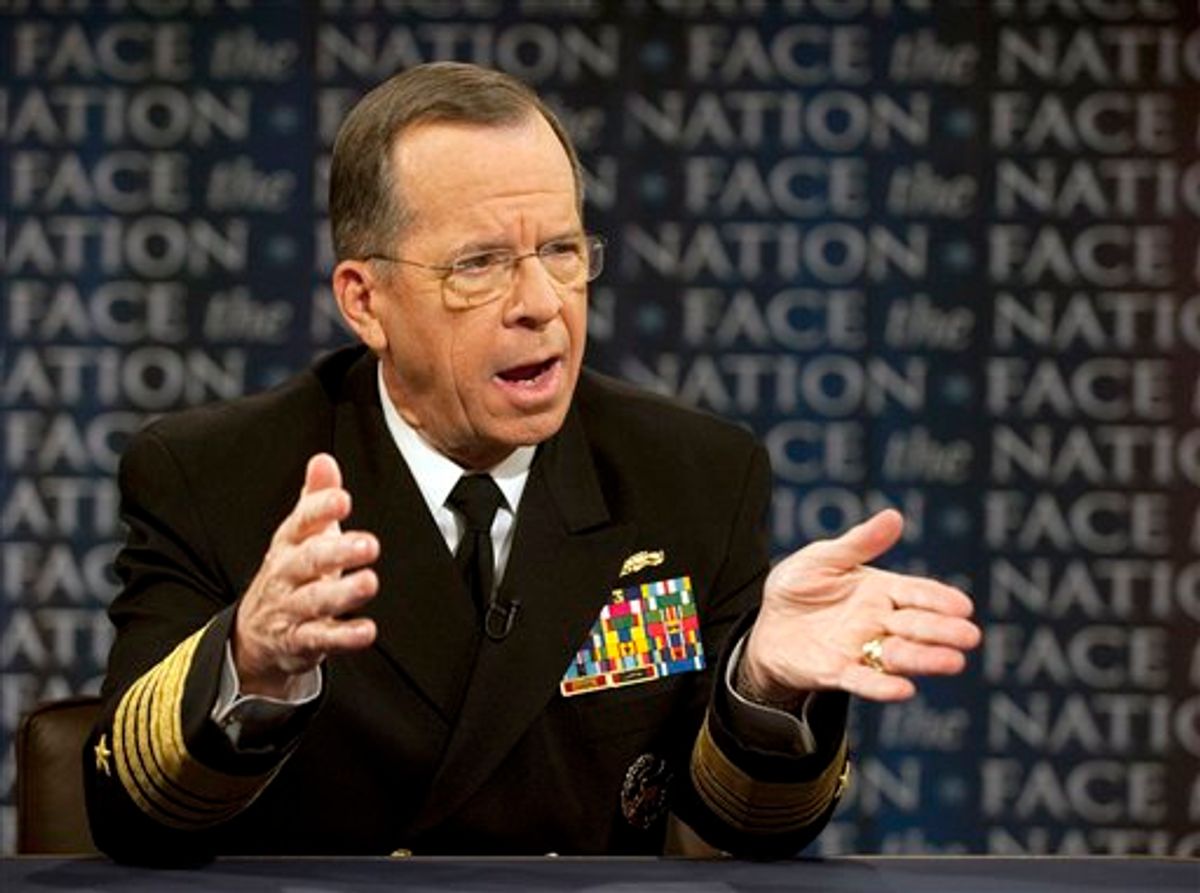 In this photo released by CBS, U.S. Navy Admiral and Chairman of the Joint Chiefs of Staff, Mike Mullen, discusses the military support for the rebels in Libya on "Face the Nation" March 20, 2011 in Washington, D.C.. (AP Photo/CBS, Chris Usher) MANDATORY CREDIT; NO ARCHIVE; NO SALES; FOR NORTH AMERICAN USE ONLY (AP)
--

This is what Adm. Mike Mullen said about Libya on "Face the Nation" Sunday morning:

And we expect, in a few days, to hand off command of this, leading it, if you will, to a coalition that will lead it over the longer term, and then, from the United States perspective, recede to a position of support.

Now this is what President Obama said in Chile Monday afternoon:

But let me emphasize that we anticipate this transition to take place in a matter of days and not a matter of weeks.  And so I would expect that over the next several days we’ll have more information, and the Pentagon will be fully briefing the American people, as well as the press on that issue.

Meanwhile, NATO ambassadors are in the midst of intense arguments about who will take command, and when. The operation is being run by the U.S. Africa Command right now.

So we've already gone from "a few days" to "a matter of days and not a matter of weeks." We can argue about the definition of "a few," but it seems clear at this point there's not going to be any transfer of command even at the outer limits of the time period that word implies.

Finally, here's an exchange from midday Monday between a reporter and Bed Rhodes, deputy national security adviser for strategic communications:

MR. RHODES:   We are going to transition this to an international coalition in terms of having the longer-term enforcement of a no-fly zone.  Right now we’re in discussions with our partners about the nature of that transition, the nature of the command structure that will follow on from the actions that we’re undertaking right now.  We anticipate, again, that that command structure will include our European allies and will take place, we’ve said, in a matter of days, not weeks.  So I would stick to that timeframe.  I mean --

MR. RHODES:  No, well, I think the temporal point is, yes, this is not going to be a couple of weeks.  This is going to be a period of days.

So there you have it, the outer limit set by the administration for transfer of command is "a couple of weeks."