In Ron Paul coins, the government does not trust

Everyone should be able to mint their own currency, says the Texas congressman. A federal jury disagrees 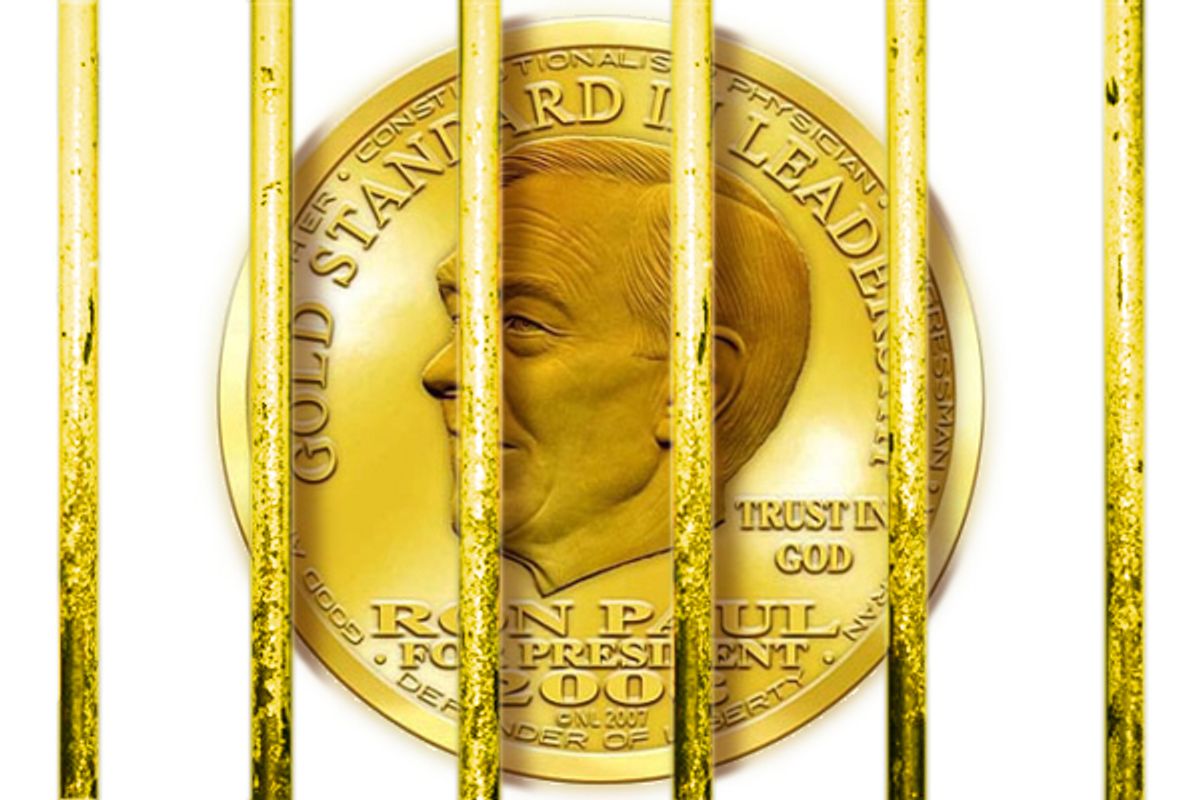 Last Friday, Bernard von NotHaus, one-time high priest of the Honolulu Free Marijuana Church, but rather more famous for his creation of the libertarian-beloved Liberty Dollar, was convicted by a federal jury "of making, possessing and circulating his own coins" in contravention of U.S. legal tender laws.

The definitive account of von NotHaus' effort to provide Americans with an alternative to the evils of "fiat" currency propped up by the Federal Reserve can be found here. If you are a believer in the theory that the U.S. should return to the days when a dollar's worth was tied to a set amount of precious metals, you may consider von NotHaus a hero. If, like most economists, you think that the gold standard played a big role in contributing to the pain and suffering caused by the Great Depression, that it greatly restricts government flexibility in dealing with economic crises, and that it is utterly impractical to advocate a return to the hard currency days of yesteryear, you might disagree.

But let's not recapitulate that argument again. (I'm even going to ignore, for now, the news that Libyan dictator Moammar Gadhafi's huge hoard of gold is helping him pay for his mercenary soldiers and partially insulating him from international sanctions -- perhaps the most compelling argument for stockpiling gold I've heard in years.) The most interesting thing about von NotHaus' conviction was the timing. Von NotHaus is famous for stamping variations of his coins with the image of Rep. Ron Paul, R-Texas, who is without question the leading advocate, among American politicians, of a return to the gold standard. And during the same week that the legal hammer came down on von NotHaus, Paul, now the chairman of the House Subcommittee on Domestic Monetary Policy, was pushing his agenda with impressive vim and vigor.

On March 15, Paul reintroduced one of his pet bills, H.R. 1098: Free Competition in Currency Act of 2011." The bill, which has no cosponsors, is divided into three parts: the elimination of laws specifying what constitutes "legal tender"; the lifting of a federal ban on private mints; and the elimination of sales and capital gains taxes on gold and silver coin sales. Paul's vision is of a future in which anyone can mint their own currency, with the hope that "the prospect of American citizens turning away from the dollar towards alternate currencies will provide the necessary impetus to the U.S. government to regain control of the dollar and halt its downward spiral."

On March 17, Paul chaired a hearing on The Relationship of Monetary Policy and Rising Prices." He called three witnesses to testify -- every single one of whom expressed a fervent belief that a return to the gold standard would serve as the cure to all U.S. fiscal evils. He even cited the FBI crackdown on von NotHaus' Liberty Services operation in his explanation of the merits of his bill. The government "hates to see any competition," he noted.

And on March 22, Paul announced a another hearing, scheduled for April 1, that would take a hard look at the U.S. Mint's "bullion programs."

If any American deserved to have his image on new, privately minted currency, Ron Paul's the guy.

How The World Works Ron Paul