The wedding bouquet I can't throw away

Our marriage ended painfully after 20 years, but I still hold on to this reminder of what we once had 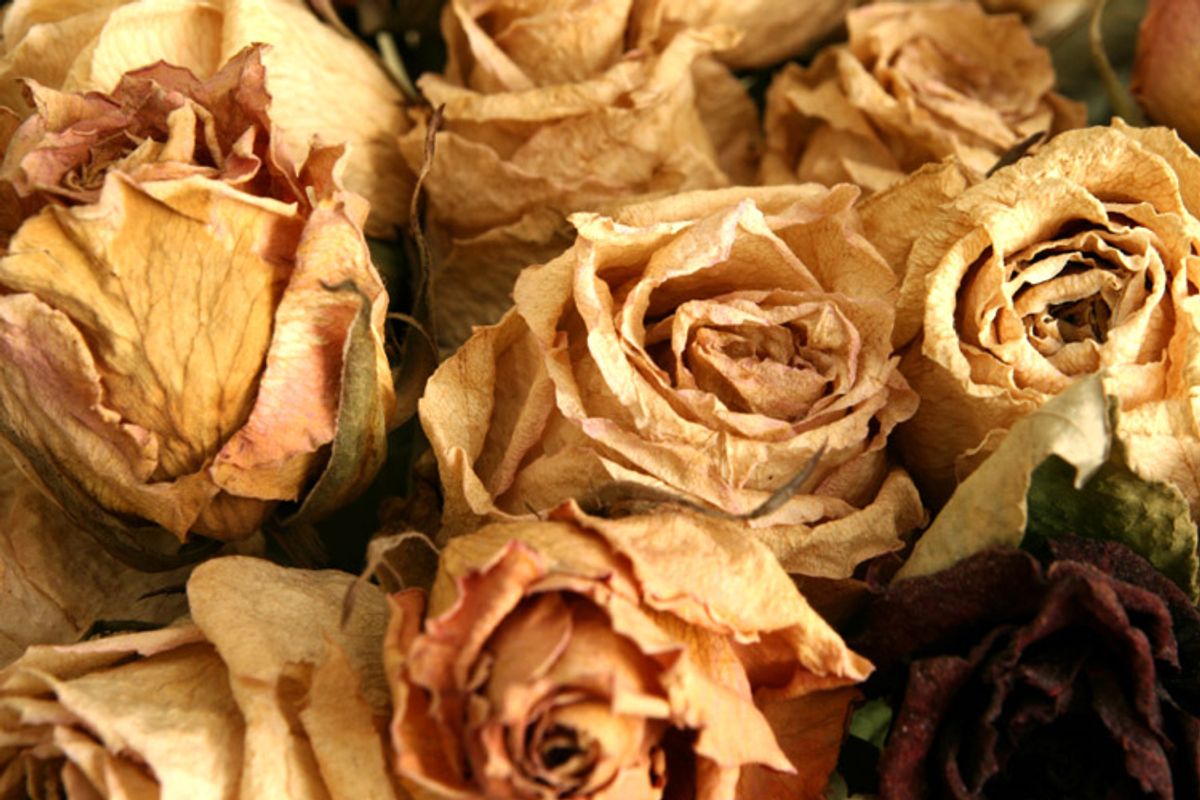 The bouquet lies inside the little pearl-topped basket tucked in my bottom drawer. There they are, dried and carefully arranged: the yellow roses from my wedding day. All 25 -- the age I was when I married and nearly the number of years before he left. Twenty-five little promises, preserved and vibrant still, for my two daughters and my two sons. He left all five of us one night six months after his own father's death and in fear for his own -- or at least his sanity. That was his excuse.

He didn't leave at once. He left in pieces. At first it was almost imperceptible: an absent laugh, a lack of eye contact, that odd pull at the corner of his mouth, a feeling of disconnect. He blamed it on fatigue, work, stress. Then his color began to go and he looked almost bruised. He started coming home late and he, a man who never drank, began. And finally there was the terrible reality he did not love me.

And how, the marriage counselor asked, are you going to handle it?

When he finally left, two years later, it was in the most clichéd way, after having relocated us from Vermont to California and then to the Midwest. By then, I knew he had left our bed for someone else's, and without friends or neighbors or family around to watch, he took an apartment two weeks after we arrived in Ohio. His hands shook when he told me. I cried. We all cried. It was something he had to do. He was lost. I was the one to blame. The alpha female. The ball and chain.

I knew I wasn't. That's how I handled it.

He left me to do the work -- the splitting up of material objects, plates from when we first married and coffee mugs from far-flung vacations, old paintings of his and letters from his family. Videotapes and photo albums of a life he did not want to remember. At first it was all so surreal it seemed like fodder for a stand-up comedy routine. But humor only works well when you have someone to laugh with.

And so life goes on and so do I. Now the little basket sits in my nightie drawer, at the bottom of the chest, the one with a handle missing and a scratch along the side where I scraped it moving. If I throw out the little basket my children asked me to keep, I am afraid I will be filled with regret, one thing I have worked so hard not to collect. Instead I stand on high ground and still wear the locket around my neck, an inch-wide silver ball that opens accordion style to reveal fold-out pictures of all six of us: the four as babies in the middle panels, him and me at either end. It dangles from a long silvery chain around my neck and my youngest likes to open it at night and fold it up. Open and close, open and close. I believe in our family, though he cannot.

And I wonder why I keep the basket with the small dried flower heads. Once or twice a year, I lift the pearly lid and smell the dark yellow buds and long for some odor, but there is nothing, just the rustle of things settling. Will I regret it myself -- throwing out the only vestige of a truly wondrous marriage that, for 17 years, was profound and intimate and filled with love, discovery, children, dogs, hard work and tenderness? Did the last five years poison me so much that I could do such a thing?

Yesterday I found it again, in the back left-hand corner, and as I took it out I wondered if I should burn it. But no, that would be too dramatic, too ceremonial, and I am too practical. I should just throw it away -- the last private symbol of our marriage.

Instead, I will keep it nestled in the back under the white negligee my mother sent me the month I was finally divorced. Under the filmy tops that scratched and were never comfortable. Under the slinky blue silk top I bought for myself when I knew he was in love with me. Under the floor-length pink and white L.L. Bean striped flannel I loved and he claimed desexed me. And under the black crotchless panties I tried to wear once on a blind "date," to enter that world again, and then dropped, quietly, politely, back into the drawer.

I'll keep the flowers nestled among the disarrayed folds of my nightie drawer. But I'll sleep naked.