Was Obama henpecked into war?

The press freaks out that Hillary Clinton, Samantha Power and Susan Rice were early supporters of bombing Libya 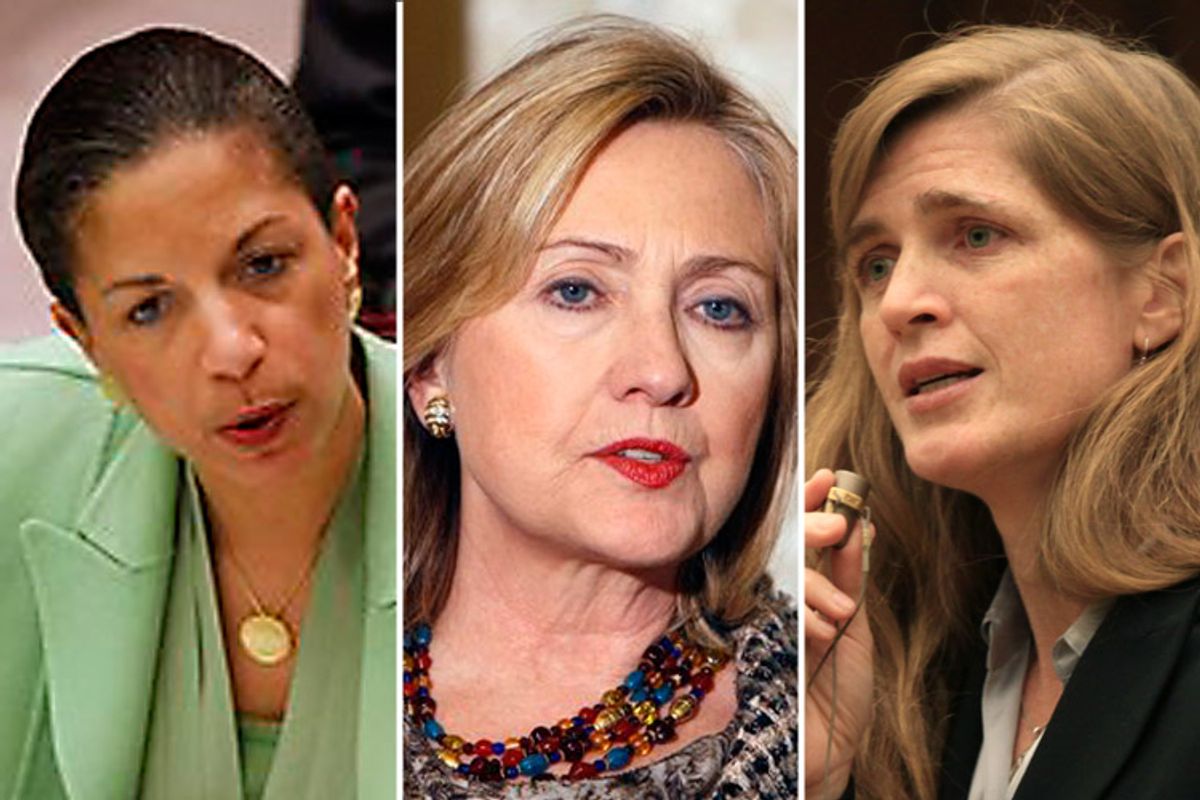 As the bombs began falling on Tripoli this weekend, a cry was heard on blogs and Op-Ed pages and chat shows throughout the land: President Barack Obama had been -- for want of a better phrase -- pussy-whipped into war by three women.

Even neutral-to-favorable stories about the events leading up to the U.S. joining in the establishment of the no-fly zone over the embattled North African nation betray a sense of discomfort over this display of female dominance.

"Boys against girls over Libya?" asks a representative headline in Politico.

And maybe Jacob Heilbrunn at the National Interest didn't realize that, in calling them "these Valkyries of foreign affairs," he's tying them to Scandinavian mythology of handmaidens (or witches) who decide which warriors are going to die in battle and who carried the slain off to Valhalla ... but that's a whole other load of symbolic baggage.

Those who hate Obama or who hate assertive women (admittedly, there's often overlap between those two groups) have jumped on the story with glee. It allows them to call Obama effeminate and spineless, led around by the nose by mere women. And, oh, how they've missed Hillary the Nutcracker. Plus, three women means three times the opportunity to point out how these ladies fall short of God-ordained feminine norms.

"We'd like to think that women in power would somehow be less prowar, but in the Obama administration at least it appears that the bellicosity is worst among Hillary Clinton, Susan Rice and Samantha Power," writes Robert Dreyfuss at the Nation blog.

Of course, they're doing it wrong, being women and all, thinking that military intervention should be all about "profound, moral" stuff like supporting democracy and preventing massive civilians casualties at the hands of a psychotic dictator, and so, Dreyfuss opines, "unless President Obama's better instincts manage to reign in his warrior women -- and happily, there's a chance of that -- the United States could find itself engaged in open war in Libya, and soon."

Mark Krikorian at the National Review says: "Look, I'm a sensitive New Age guy -- I cook, I do laundry, I choke up at movies (well, Gladiator anyway)." But since Islamic menfolk aren't nearly as enlightened as he, he worries that all our enemies are learning from this military intervention is that "our commander-in-chief is an effete vacillator who is pushed around by his female subordinates."

"Before you send me any burning bras, the problem is not with women leaders -- the enemies of the Virgin Queen and the Iron Lady can attest to that. The problem is not even with the president having strong female subordinates. Rather, Obama's pusillanimity has been hugely magnified by the contrast with the women directing his foreign policy and the fact that they nagged him to attack Libya until he gave in. Maybe it's unfair and there shouldn't be any difference from having a male secretary of state do the same thing, but there is."

There it is, indeed.

As much fun as it can be to throw misogynistic, emasculating potshots at political opponents, there are a couple of points those of us with functioning brains need to keep in mind:

First, it's not like Clinton, Rice and Power walked into the Oval Office, batted their eyes, and asked the president to pretty-please attack that mean old Mr. Gadhafi. Nor did they march in and grab him by the scruff and order him to launch the damn Tomahawks already.

No, they did their jobs, publicly towing the administration line while working behind the scenes to sharpen their arguments and marshal their resources. In the end, Clinton swung key Arab players to their side and Rice got a 10-5 vote through the U.N. Security Council. Which means, says Brian Katulis of the liberal Center for American Progress, they "got the international support that makes this more like the 1991 gulf war than the 2003 Iraq war."

Second, while this was an argument made primarily by women, it was in the end a decision made entirely by men: Barack Obama, Defense Secretary Robert Gates, Joint Chiefs Chairman Mike Mullen. Men who, presumably, had their cojones firmly attached to their bodies at the time and only had to say "no" in a firm and (dare we say) manly voice to send the Valkyries on their way.

At least we've proven one thing: Wars may come and go, but sexism is eternal.