The short and strange career of Elizabeth Taylor, movie star

She's far more famous for being famous -- but she began as a profligate, sexy, immensely compelling actress 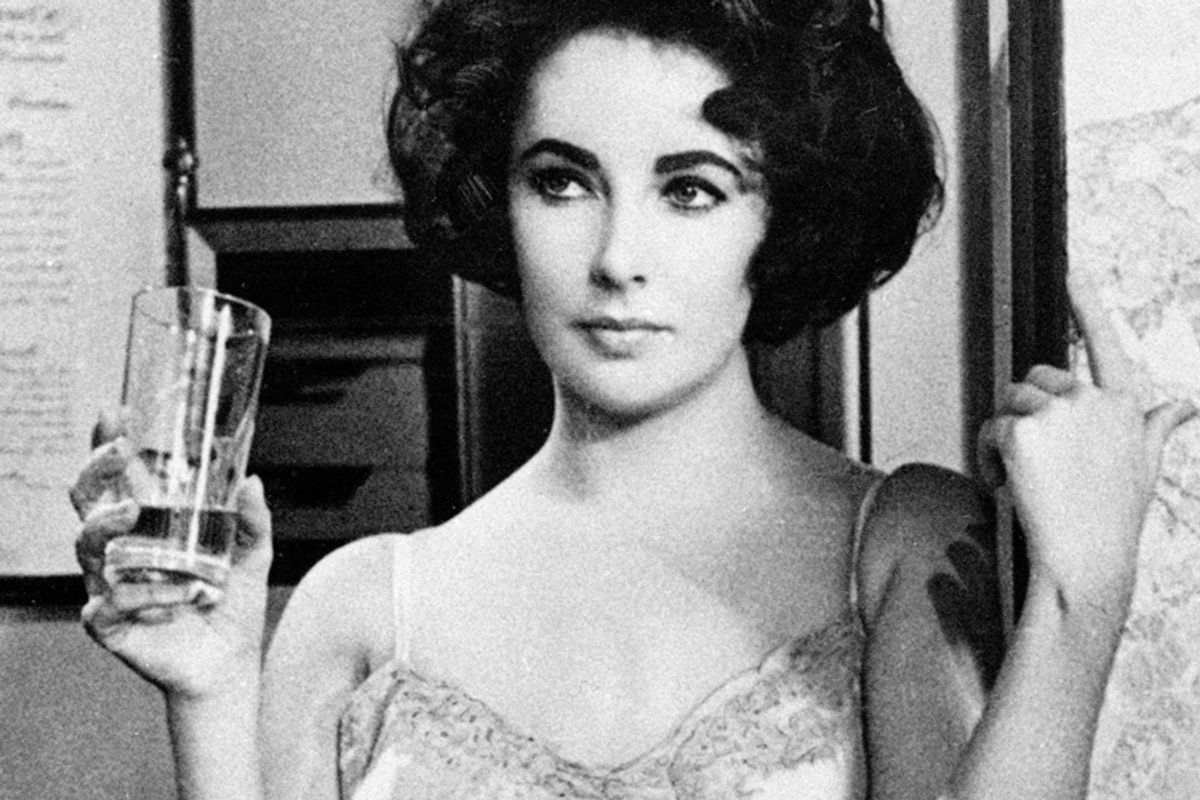 When news arrived in my household early this morning that Elizabeth Taylor had died at age 79, my wife was surprised to learn that Taylor had still been alive. Every obituary that gets written today -- including the ones actually written years or months ago -- will describe Taylor as one of the greatest actresses of Hollywood's golden age, and while that's true, it gets you nowhere in understanding the strange and bifurcated quality of her fame. Taylor had two almost unrelated careers, one as a movie star and one as a tabloid celebrity. Indeed, she may be the only pop-culture figure who crossed the rainbow bridge from the carefully managed faux-glamour of old Hollywood to the relentless trash-spectacle of the 24/7 news cycle. (Brando? Almost.) But all the roles she played, both on-screen and in person, now belong to the past.

No one as big as Elizabeth Taylor was can quite be forgotten, but the reasons why we remember her are not entirely clear. One younger colleague of mine recalls her as a mysterious figure who pitched diamonds on TV. Another was blown away by Taylor's electrifying performance as the boozy, embittered, charismatic Martha in "Who's Afraid of Virginia Woolf" -- the only Taylor movie she's ever seen -- and resolved to have a marriage like that. (Will those of you in the congregation who were actually raised in 1960s or '70s alcoholic households please join me in saying: Dear God, please don't.) How in the world do you make sense of a career that encompasses those things, along with a period of pure, almost piercing child stardom, stretches as a leading lady and an Oscar-winning character actress, well-deserved reputations as a boozehound and serial monogamist, genuinely heroic AIDS activism (at a time when almost no celebrities wanted to be associated with a deadly homosexual plague) and an extended afterlife as the butt of late-night comedy routines and confidante of Michael Jackson?

You can't quite do it, of course, which is why celebrity biographers and journalists are drawn toward Taylor the way the Nazgûl are drawn to the One Ring, as an example of everything they hate, everything they love and everything about the 20th century they long to understand and explain to others. In her 2009 review of William J. Mann's "How to Be a Movie Star: Elizabeth Taylor in Hollywood," my colleague Laura Miller wrote that Taylor didn't much care about movies and that her real breakthrough was inventing a more candid and openly hedonistic model of public celebrity: "What she really wanted was to lounge around on yachts and in luxury hotels, chowing down on fried chicken with 'lots of gravy' and waking up to a Tiffany's box on her pillow on a fairly regular basis. Acting, fame and a few of her marriages were little more than means to those ends."

In the face of all that, it seems curiously old-fashioned to insist on going back to Taylor's actual film performances, which really can't be separated from the larger context of her performance as Elizabeth Taylor. (As everyone else will be observing today, she despised the nickname "Liz," and none of her friends ever used it.) Certainly by the 1966 film version of Edward Albee's Broadway smash "Who's Afraid of Virginia Woolf?," her role as the drunken, sexy harridan Martha, opposite two-time husband Richard Burton, was already an aspect of her meta-celebrity, and the love-hate relationship between George and Martha was understood (correctly or not) to reflect the one between Liz and Dick.

Taylor won an Oscar for that role at age 34, and no one could have imagined that her career as a star was almost over. Oh, she made more than 20 films after that, if you add up all the made-for-TV dreck from the '80s, but hardly any of them are worth seeing: Franco Zeffirelli's "Taming of the Shrew," with Burton? I'm sure it's super-dated, but maybe. John Huston's "Reflections of a Golden Eye," with Marlon Brando? Basically meh. I remember enjoying the 1977 film of Stephen Sondheim's "A Little Night Music," in which Taylor plays Mephistophelean husband-tamer Desiree Armfeldt, but I'd be scared to watch it now. Otherwise there's a whole lot of "Victory at Entebbe" and "The Mirror Crack'd" and "Hammersmith Is Out" (apparently a film made in 1972 that I've never heard of, let alone seen), not to mention TV roles in "General Hospital" and "Hotel" and "North and South."

Taylor's period of real movie stardom, when she was at least as famous for her screen performances as her personal life, begins with her World War II-era roles in "Lassie Come Home" and "National Velvet," made when she was 11 and 12 years old. One secret of her enduring fame is that those movies remained a staple of childhood viewing for several subsequent generations; by the time I first saw them, they were almost three decades old. Another is that they preserve a vision of this impossibly pretty girl before puberty and sexuality and stardom and all the versions of herself that would come later. ("Lassie Come Home" is too leisurely and talky for my kids, but "National Velvet" still holds up -- and every public library has multiple copies.) The productions are stagey, English-y and old-fashioned, but Taylor's emotional immediacy, amazing expressiveness and memorably violet eyes command your attention throughout. She was injured falling from a horse while making "National Velvet," the first of a long series of medical emergencies that often made her seem like a Hollywood human sacrifice.

She played successful supporting roles in a few late-'40s hits, including "Life With Father" and "Little Women," and then emerged as a full-fledged teenage star in 1950 with Vincente Minnelli's "Father of the Bride" and its sequel the following year, "Father's Little Dividend." These movies are halfway bearable comic antiques loaded with the day before yesterday's gender stereotypes, and I'm not sure anything about them is convincing, including Taylor's performance as a wholesome American bride. But she brings unquenchable spirit to a generally damp enterprise, and even injects a dose of sexuality into films that have been systematically cleansed of it. You can't take your eyes off her.

So for the rest of the '50s Taylor was a big star, at least -- but again, relatively few of those films have stood the test of time. I'm not the world's biggest fan of George Stevens' 1951 "A Place in the Sun," a weirdly butchered adaptation of Theodore Dreiser's "An American Tragedy," but there's no denying the melodramatic undertow provided by Taylor and Montgomery Clift. (Another thing everyone who writes about Taylor notices: She seemed to connect intensely with gay co-stars like Clift and Rock Hudson.) Otherwise it's an array of forgotten costume dramas -- "Ivanhoe," "Beau Brummell," "Elephant Walk" -- until Taylor's roles opposite Rock Hudson in "Giant" (1956) and Paul Newman in "Cat on a Hot Tin Roof" (1958), the two best and biggest pictures of her entire career.

You can accuse Taylor of not caring much about her movie roles, as William Mann does, but you can't accuse her of not responding to superior material. "Giant" and "Cat on a Hot Tin Roof" may seem overwrought and soapy by contemporary standards, but they're pretty much Shakespeare compared to Taylor's other '50s movies, and she throws herself into them body and soul. The tangled sexual politics of Tennessee Williams' frustrated Maggie the Cat are more than we can work out here, but viewers of both sexes and all orientations were hypnotized by the voluptuous Taylor, stuffed into that slip, as she begged, cajoled, commanded and manipulated her reluctant, drunken, probably-gay husband into bed.

Quite honestly, the movies we've now mentioned are all you need to see, or almost all. Taylor followed "Cat" with another acclaimed adaptation of a Williams play, "Suddenly, Last Summer," but that's an even more bizarre and dated psychosexual nightmare, with an oddly inflated reputation. It looks and sounds classy, thanks to director Joseph L. Mankiewicz, screenwriter Gore Vidal and a cast that includes Clift, Katharine Hepburn and Mercedes McCambridge, but just try watching it all the way to the end without horrified laughter. Taylor won her first Oscar playing a hooker in the moralistic "Butterfield 8," and while she chews up the scenery and looks terrific, the movie's isn't trashy enough to be fun or serious enough to be any good.

With Mankiewicz's tormented 1963 production "Cleopatra," essentially the last of Taylor's roles as a Hollywood leading lady, she simultaneously moved into the Richard Burton period and the famous-for-being-famous period. The movie is almost entirely remembered as one of the most expensive flops in Hollywood history -- adjusted for inflation, it cost perhaps $300 million -- and as the occasion that brought Burton, who plays Mark Antony, into Taylor's life. How good is her performance as the doomed Egyptian queen, and how do we separate that out from the world-conquering, self-parodying personality explosion of Taylor writ large? I've seen the movie, but the triumph and tragedy of Elizabeth Taylor lies in the fact that I just can't answer that question. Nobody can; it isn't a question that matters. Taylor escaped from the movies at that point, and they'd never held more than a few fragments of her personality in the first place.