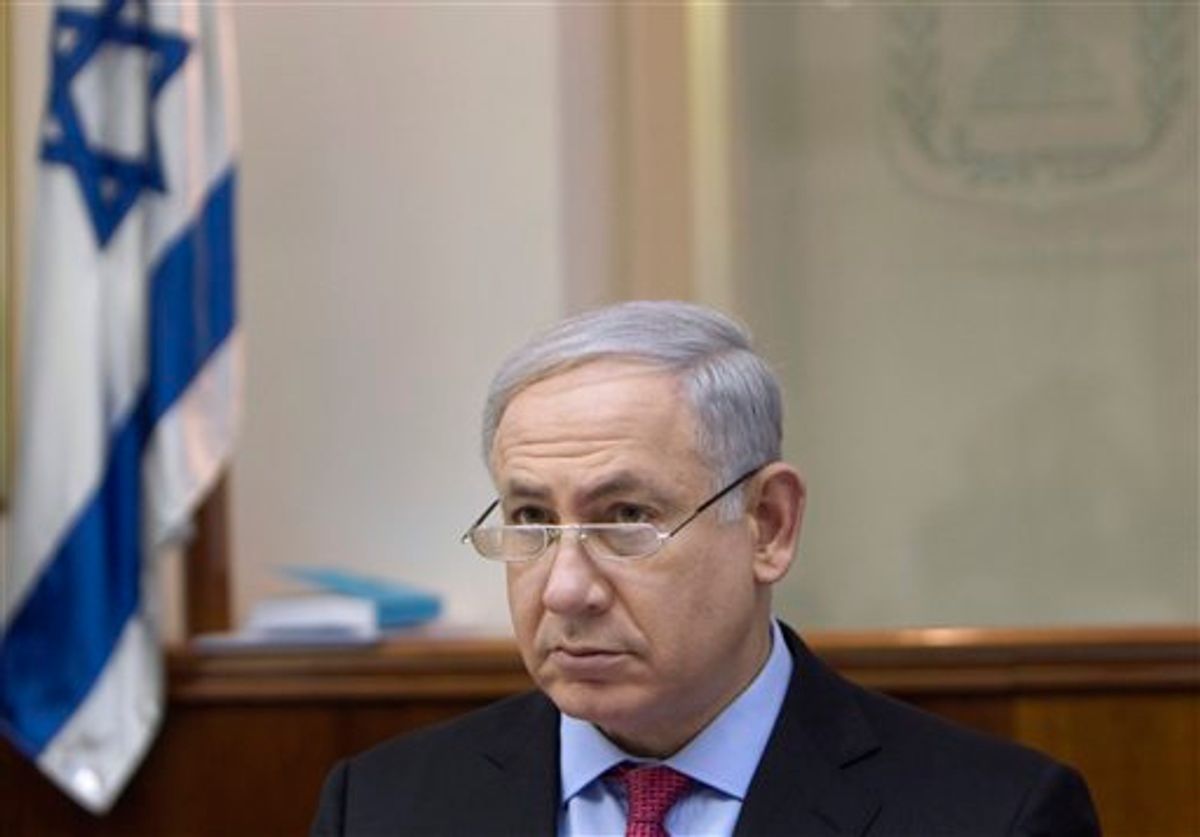 Israel's Prime Minister Benjamin Netanyahu convenes the weekly cabinet meeting in Jerusalem, Sunday, March 13, 2011. Israel said Sunday it has approved hundreds of settler homes after five members of an Israeli family, including three children, were knifed to death as they slept in a West Bank settlement over the weekend. (AP Photo/Ronen Zvulun, Pool) (AP)
--

Israel's prime minister says his country will react "aggressively, responsibly and wisely" to a recent wave of Palestinian violence.

Benjamin Netanyahu issued his statement just hours after a bomb killed a 60-year-old woman at a crowded bus stop in Jerusalem. Earlier Wednesday, southern Israel was bombarded by Palestinian rocket and mortar fire.

Netanyahu said he spent the evening huddled with top security officials to discuss the situation.

He spoke to reporters just before boarding a flight to Russia, where he said he would discuss Israel's security situation with that country's leaders.

The bombing brought back memories of the second Palestinian uprising last decade, a period in which hundreds of Israelis were killed by suicide bombings in Jerusalem and other major cities, and thousands of Palestinians died in Israeli military operations in the West Bank and Gaza Strip.

There was no immediate claim of responsibility, but authorities blamed Palestinian militants and threatened harsh retaliation. The attack came against the backdrop of a rising wave of violence that has threatened a lengthy period of relative calm, and made hopes for a negotiated peace ever more distant. The moderate Palestinian government in the West Bank condemned the violence.

The 3 p.m. bombing occurred near the main entrance to Jerusalem, next to the city's central bus station and main convention center, an area that is crowded with travelers and passers-by. The bomb went off next to a food stand called, in a Hebrew play on words, "a blast of a kiosk." The owner said the name was to remember an earlier attack at the same site.

The blast reverberated throughout Jerusalem and blew out the windows of two crowded buses. Rescuers removed bloodied people from the area on stretchers, as sirens from speeding ambulances wailed in the background.

Authorities said a 60-year-old woman was killed, while two dozen other people were hurt, several critically.