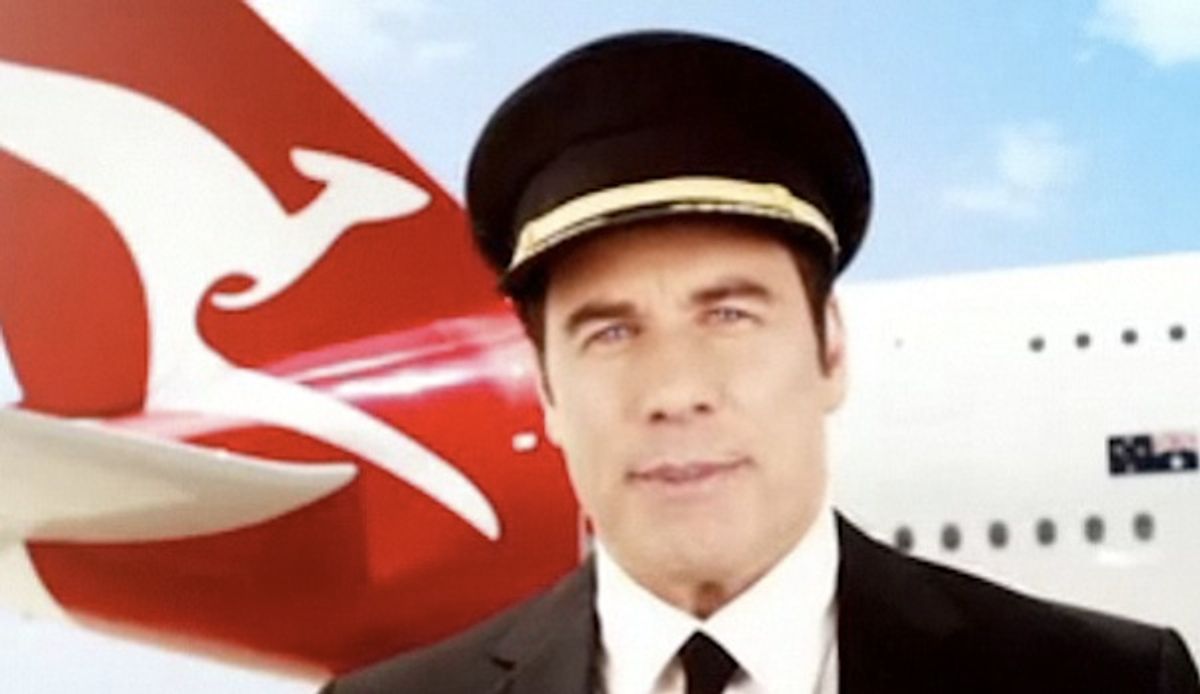 Qantas Airlines has a problem: The staff of the Australian plane company has taken offense at a new pre-flight instructional video starring actor John Travolta, who was named the airline's official ambassador last year. On Internet forums, the crew has anonymously attacked Travolta for everything from not being a "real pilot" to referring to the Qantas employees as a team.

"It makes us feel like we work at McDonald's," said one of the posters.

Here's the thing, though. There's a lot of criticism that you can lob at John Travolta, like that he's a hardcore Scientologist, or that he hasn't made a good film since "Pulp Fiction" (sorry, "Face/Off"), or that his head looks like its smugly melting into his neck. Those are just some of the many problems one could find with the "Grease" actor, should you be inclined to try. One issue John Travolta does not have, however, is lying about being a pilot.

John Travolta, as you may know, is definitely able to fly airplanes. I'm not saying this is necessarily a positive thing, since obviously he does not fly for a living, but more as a recreational hobby afforded to him from all the residuals of the "Look Who's Talking" franchise. That doesn't diminish the fact that Travolta has a pilot's license, owns five planes, and has part of his $4.2 million Florida crash pad situated on an airfield. So if Qantas wants to pay John a couple of suitcases full of money so he'll slap its logo on his own Boeing 707–138 and make a funny video for the (usually mind-numbingly dull) pre-flight instructions, they could have done worse, like hiring a famous person who is not able to fly a plane.

As for the "team vs. crew" issue, John Travolta did not write the script to this admittedly corny video. He also isn't the female voice that condescendingly announces, "We know that you are more than capable of operating a seat belt." Again, this is probably an issue you want to take up with your employer, not the famous person it hired to read off a bunch of lines in a pilot's hat.

If you want to hate on the actor, be my guest. I have no stake in that guy making any more films in his lifetime. But let's at least be fair here: John Travolta can fly a plane. That makes him a pilot. Let's all go back to focusing on the real problems of airlines today, like how their food is so terrible and their bags of peanuts are really hard to open.