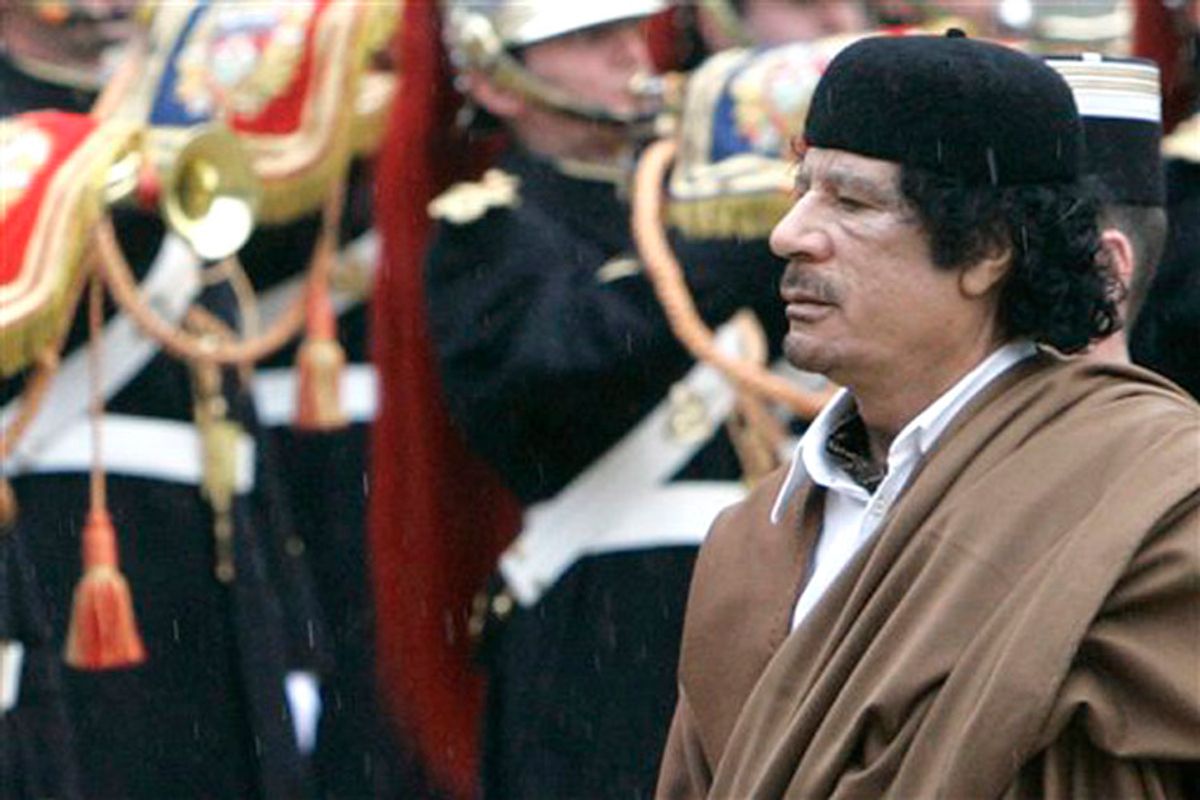 Libyan leader Col. Moammar Gadhafi reviews the French Republican Guard upon his arrival at the Elysee Palace for a meeting with French President Nicolas Sarkozy, in Paris, Monday, Dec. 10, 2007. Gadhafi takes a giant stride toward international respectability Monday, making a visit to France likely to conclude with deals worth millions, but drawing protests, including from a government minister. (AP Photo/Christophe Ena) (Christophe Ena)
--

The United States has trained the Libyan military in recent years and American manufacturers have sold the Gadhafi regime military equipment, putting the U.S. in the strange situation of bombing a foreign force that it helped build up.

The extent and nature of all the training is not clear, but State Department figures show that the sale of millions of dollars worth of aircraft parts to Libya was approved in recent years -- ironic, in hindsight, given the current focus on Gadhafi's air force. The cooperation highlights how quickly America's Libya policy has shifted as well as the sheer reach of U.S. military training programs. In fiscal 2009, the U.S. spent at least $536 million on training military personnel from 159 countries.

The backdrop for the cooperation between the American and Libyan militaries was improving relations between the two countries generally, following the announcement in 2003 by President Bush that Moammar Gadhafi had agreed to give up "weapons of mass destruction" programs. When John McCain visited Tripoli in the summer of 2009, Gadhafi's son Muatassim pressed a receptive McCain on getting military supplies. McCain, according to a diplomatic cable describing the meeting, spoke of the cooperation between the two militaries:

"[McCain] encouraged Muatassim to keep in mind the long-term perspective of bilateral security engagement and to remember that small obstacles will emerge from time to time that can be overcome," the cable says. "He described the bilateral military relationship as strong and pointed to Libyan officer training at U.S. Command, Staff, and War colleges as some of the best programs for Libyan military participation."

It's not clear how many Libyan officers have taken part in training at American war colleges. But in fiscal 2009 (the year beginning in October 2008), the most recent period for which the government has released data, the Defense Department spent about $30,000 training two Libyans in the Combating Terrorism Fellowship Program. An annual report on foreign military training talks about increasing spending for fiscal 2010, including a State Department program to teach English to Libyan officers. The report praises Libya as "an important partner in counterterrorism and regional stability," and makes the case for future training.

In September 2009, three senior Libyan military officers visited headquarters of the U.S. Africa Command in Germany to receive "in-depth briefings on the command, how it functions and works with African militaries," according to a DOD report. The Africa Command is now overseeing the bombardment of Libya.

Earlier that year, in March, "Libyan naval officers spent a day aboard the USS Eisenhower in the Mediterranean Sea to speak with crew members and watch flight deck operations," according to the same report. That followed the January 2009 signing of a "memorandum of understanding" between the U.S. and Libya on military cooperation.

There's also evidence that Libya has purchased American weapons. More than $15 million in arms sales from U.S. manufacturers to Libya were authorized by the government in fiscal 2009 alone, according to the State Department. (Only $400,000 of that was delivered that year; presumably the rest was delivered in later years, for which data is not yet available.) That sum was mostly authorized in the category of "aircraft and associated equipment." That year more than 20,000 components and parts of aircraft were authorized for sale to Libya. In 2008, $46 million in military sales were approved by the government.

In late February, the State Department suspended all arms export licenses for Libya, suggesting there may have been a flow of U.S. arms into the country until very recently.

U.S. allies in the fight against Gadhafi have also been involved in arms deals with Libya, including Britain and France, which has reportedly sold missiles to the Libyans -- something both countries, as well as the U.S., are probably regretting today.