Airstrikes hit base in the interior of the country, while rebel advances founder 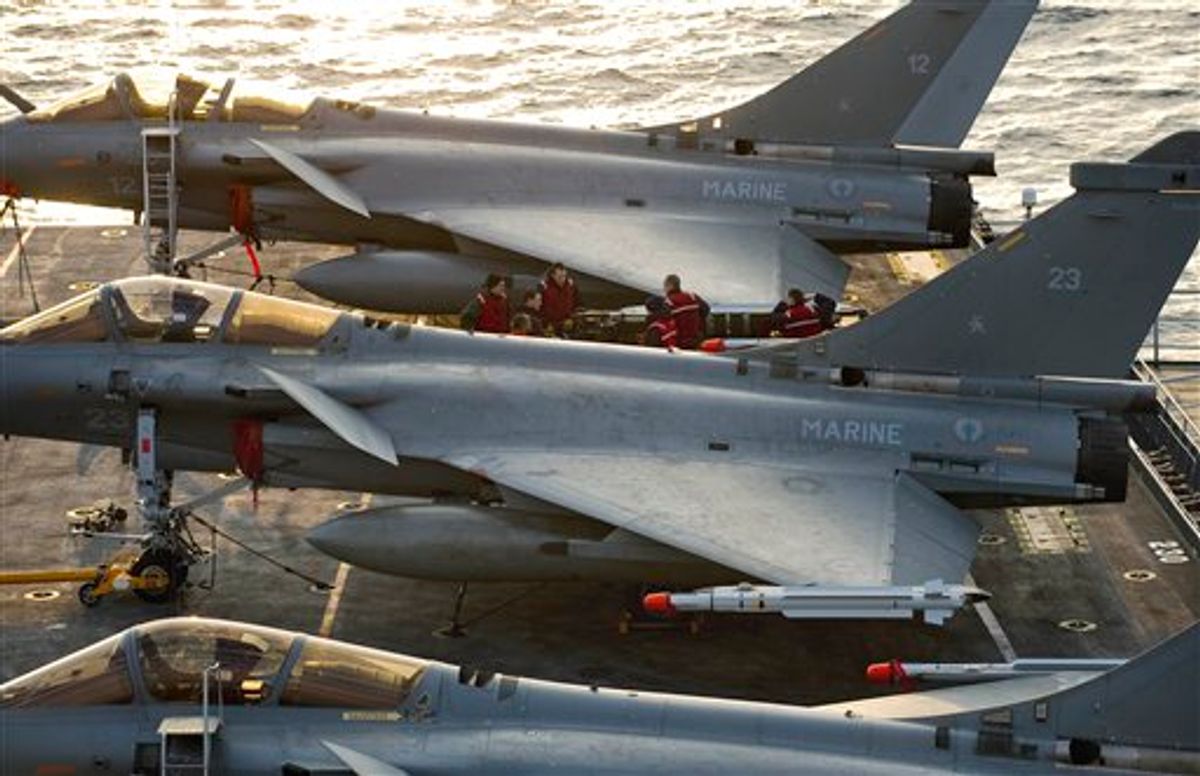 In this Wednesday March 23, 2011 photo provided by the French Army, French Navy Rafale jet fighters on the deck of Charles de Gaulle aircraft carrier in the Mediterranean sea. The international military operation against Libyan leader Moammar Gadhafi's forces may last days or weeks _ but not months, France's foreign minister said Thursday. Alain Juppe also said that he hopes the campaign in Libya serves as a warning to autocratic regimes elsewhere, including in Syria and Saudi Arabia. (AP Photo/Raphael Martinez) NO SALES (AP)
--

French airstrikes hit an air base deep inside Libya in an effort to stop possible traffic of arms or the flow of mercenaries into Libya, a military official said Thursday.

In a key eastern city, talks between Moammar Gadhafi's forces and between tribal sheiks over their possible withdrawal stalled over a demand that the troops leave their heavy weaponry behind, rebels said Thursday.

The French strikes overnight hit a base about 250 kilometers (155 miles) south of the Libyan coastline, French military spokesman Thierry Burkhard told reporters in Paris on Thursday without elaborating on the target. He said military officials would keep any analysis of damage confidential.

In Tripoli, Libyan deputy foreign minister Khaled Kaim said that the "military compound at Juffra" was among the targets hit before dawn. Libya has at least two air bases deep in the interior.

The U.N. Security Council authorized the no-fly zone to protect Libyan civilians after Gadhafi launched attacks against anti-government protesters who wanted him to leave after 42 years in power. But rebel advances have foundered, and the two sides have been at stalemate in Ajdabiya, the gateway to the opposition's eastern stronghold.

The city has been under siege for more than a week, with the rebels holding the city center but facing relentless shelling from government troops positioned on the outskirts.

Mohammed Ali, 56, who fled with his family in a station wagon said "They've cut everything -- the electricity, the water. It's getting worse and worse inside."

Government troops also continued barraging the western city of Misrata on Thursday but were forced to roll back their tanks periodically amid coalition airstrikes.

A 42-year-old doctor in the city said shelling had damaged a mosque and a hotel near the hospital.

"When the allies' planes were seen flying in the sky, the shelling stopped and the tanks fled," he said. "We still have to deal with snipers in the main street in Misrata and try to warn people to stay away from it."

Burkhard denied that the strikes amounted to a new phase of the campaign, insisting that all of France's efforts were being conducted under the aegis of the U.N. Security Council resolution.