By Tomoko A. Hosaka - Shino Yuasa 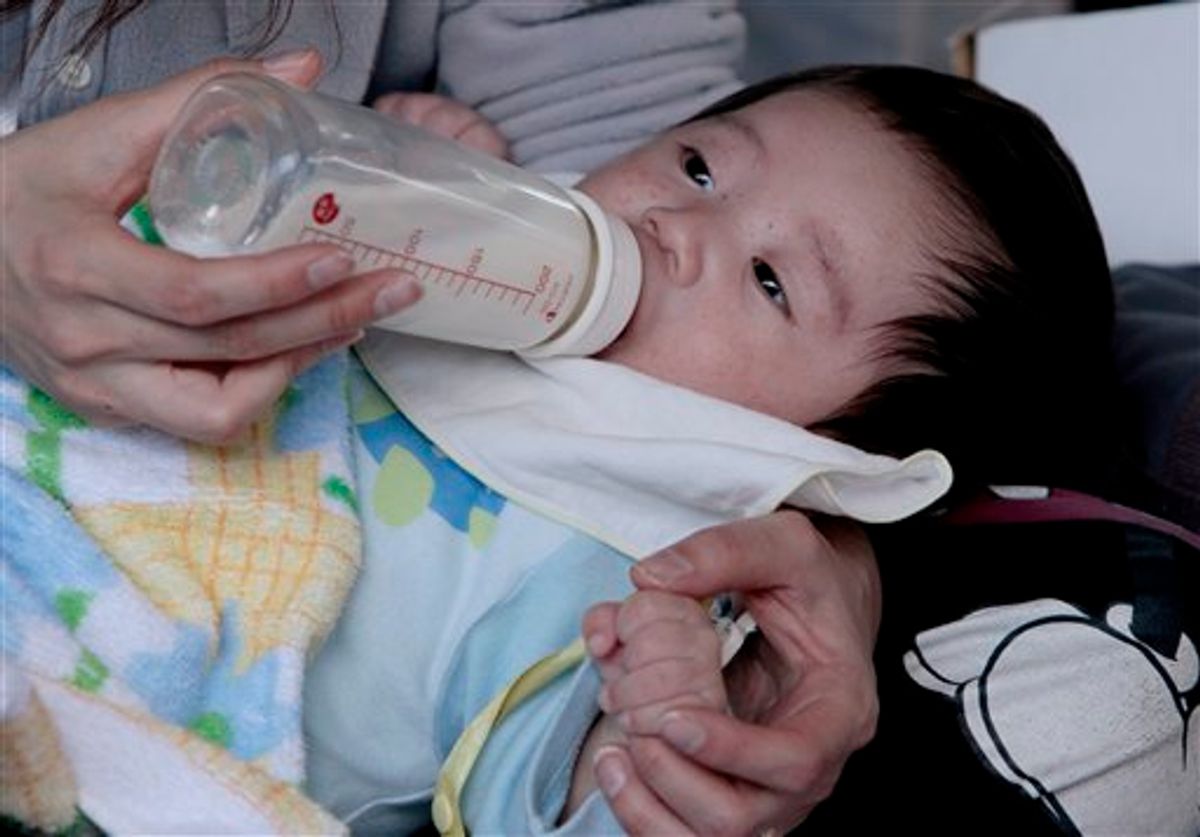 A mother feeds her baby at an evacuation center in Yamagata Prefecture, northern Japan, Thursday, March 24, 2011. Hundreds of thousands remain homeless, squeezed into temporary shelters without heat, warm food or medicine and no idea what to call home after the March 11 tsunami swallowed up communities along the coast and dozens of strong aftershocks continued to shake the nation. (AP Photo/Mark Baker) (AP)
--

Anxiety over food and water remained high a day after Tokyo officials reported that the radioactive iodine in the city's tap water measured more than twice the level considered safe for babies.

Radiation has been leaking from a nuclear plant 140 miles (220 kilometers) northeast of Tokyo since it was struck by the March 11 quake and engulfed by the ensuing tsunami. Feverish efforts to get the plant's crucial cooling system operating have been beset by explosions, fire and radiation scares.

On Thursday, three workers at the Fukushima plant were exposed to radiactive elements, with two of them injured, while laying electrical cables in one unit, said Fumio Matsuda, a spokesman for the Nuclear and Industry Safety.

The two had injuries to their feet and were taken to a hospital for treatment, he said. They were exposed to radiation levels up to 180 millisieverts, less than the maximum amount of 250 millisieverts that the government is allowing for workers at the plant, he said.

More than two dozen people have been injured trying to bring the Fukushima Dai-ichi plant under control.

The developments highlighted the challenges Japan faces as officials scramble to avert a major nuclear crisis after a magnitude-9 quake off Sendai triggered a tsunami that killed an estimated 18,000 people and left hundreds of thousands homeless.

Radiation has seeped into raw milk, seawater and 11 kinds of vegetables, including broccoli, cauliflower and turnips, grown in areas around the plant.

Concerns also spread to Europe. In Iceland, officials said they measured trace amounts of radioactive iodine in the air but assured residents it was "less than a millionth" of levels found in European countries in the wake of the 1986 Chernobyl disaster.

In Tokyo, government spokesman Yukio Edano pleaded for calm. Officials urged residents to avoid panicked stockpiling, sending workers to distribute three small bottles of water each to an estimated 80,000 families with babies of 12 months or younger.

That didn't stop Reiko Matsumoto, mother of 5-year-old Reina, from rushing to a nearby store to stock up.

"The first thought was that I need to buy bottles of water," the Tokyo real estate agent said. "I also don't know whether I can let her take a bath."

New readings showed Tokyo tap water was back to safe levels Thursday but the relief was tempered by elevated levels in two neighboring prefectures of the cancer-causing element: Chiba and Saitama.