The stupid saga of Andrew Breitbart and the Huffington Post 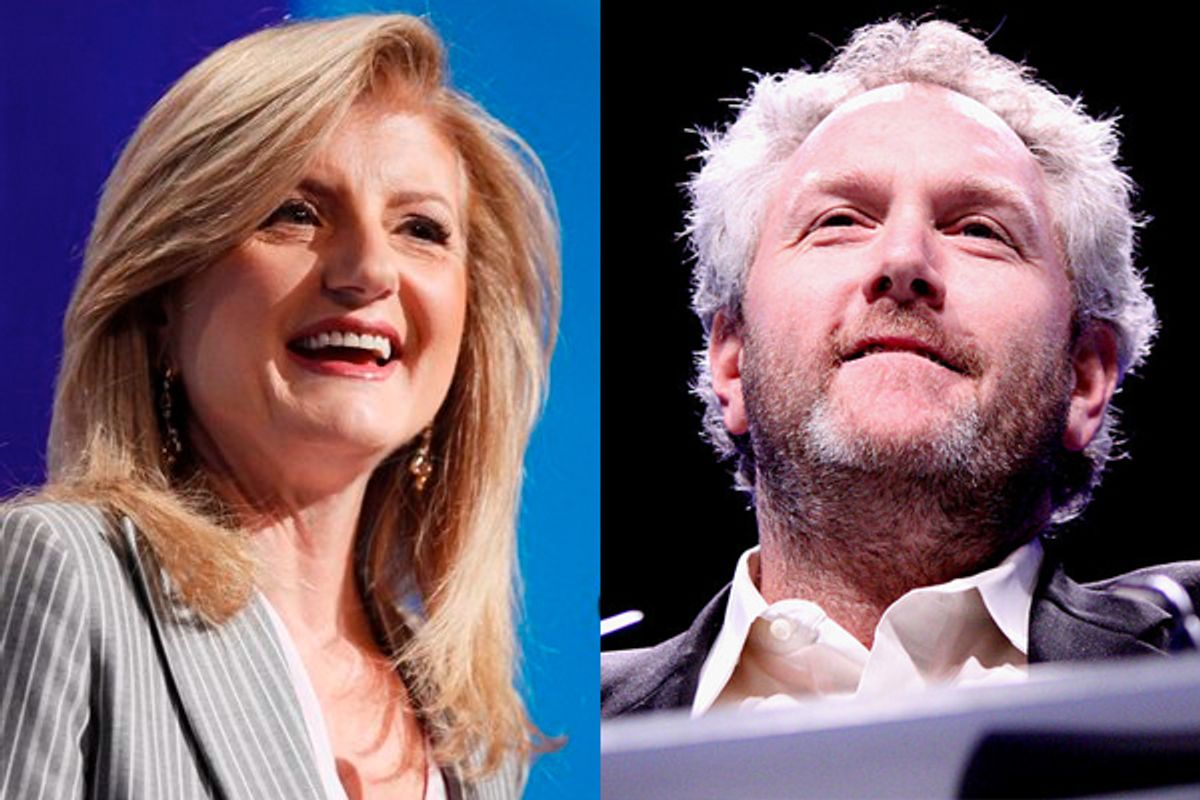 So! Arianna Huffington -- recently put in charge of all the "content" at AOL following the dial-up ISP's acquisition of her former "liberal Drudge" Internet newspaper -- gave a blog to her old friend Andrew Breitbart. Breitbart helped build the HuffPo, back when he was just another loudmouth Hollywood conservative and not the even louder-mouthed full-tilt culture warrior he is today (thanks in part to training at places like the Claremont Institute). Hundreds of people -- many of them idiots, frauds, and liars -- have blogs at the HuffPo. But the HuffPo actually promoted Breitbart's writing on the front page of the site.

Now, Mr. Breitbart is not just a conservative pundit. He is a crusading propagandist who publishes a wide variety of untruths and smears across his "Big" websites. He is not guilty of having the wrong opinions, he is guilty of being a shameless, race-baiting bully.

So various whiny liberals complained, like always, and the Huffington Post bravely promised to continue promoting the stupid nonsense from Arianna's old friend, in the name of democracy and the free exchange of ideas. ("Ideas" like "NPR and the White House are collaborating to spread the false idea that the Tea Parties are racist" and "the White House is lying about its visitor logs and specifically including the names of famous people in order to embarrass Andrew Breitbart.") ColorOfChange.org organized a petition, the HuffPo dismissed its complaints.

Complaining about the Huffington Post publishing awful, offensive garbage seldom works, because some of that garbage is profitable and some of it is just stuff that Arianna herself seems to like. And Huffington herself is too busy spending big bucks bringing big names to AOL/HuffPo while shuttering dozens of existing titles and letting various less impressive content-providers go to care if a bunch of liberals are mad at her site.

But! Breitbart then apparently went too far when he said a bunch of stupid and offensive things about Van Jones in an interview with the Daily Caller. And Arianna is actually quite close to the former White House "green jobs czar."

So: That got Breitbart kicked off the front page, finally.

Andrew Breitbart’s ad hominem attack on Van Jones in The Daily Caller -- right down to calling him a "commie punk" and "a cop killer-supporting, racist, demagogic freak" -- violates the tenets of debate and civil discourse we have strived for since the day we launched. As a result, we will no longer feature his posts on the front page.

He is welcome to continue publishing his work on HuffPost provided it adheres to our editorial guidelines, as the two posts he published on HuffPost did -- guidelines that include a strict prohibition on ad hominem attacks. Our decision today recognizes that placing posts on the front page is an editorial call that elevates some posts over others, and is an indication of how seriously we take these judgment calls.

A strict prohibition on ad hominem attacks! ("Against Arianna's friends," is the bit of that sentence that spokesman Marco Ruiz left out.) (Also there is apparently no prohibition on constant, practically obsessive race-baiting, but whatever.) (And obviously there is no prohibition whatsoever on spreading toxic bullshit about autism and other assorted crimes against science.)

Andrew has now gotten exactly what he wanted. He doesn't need to publish his idiocies at the Huffington Post. But getting banned from the Huffington Post proves his thesis about the repressive, anti-free speech liberal media. And he'll never shut up about it.