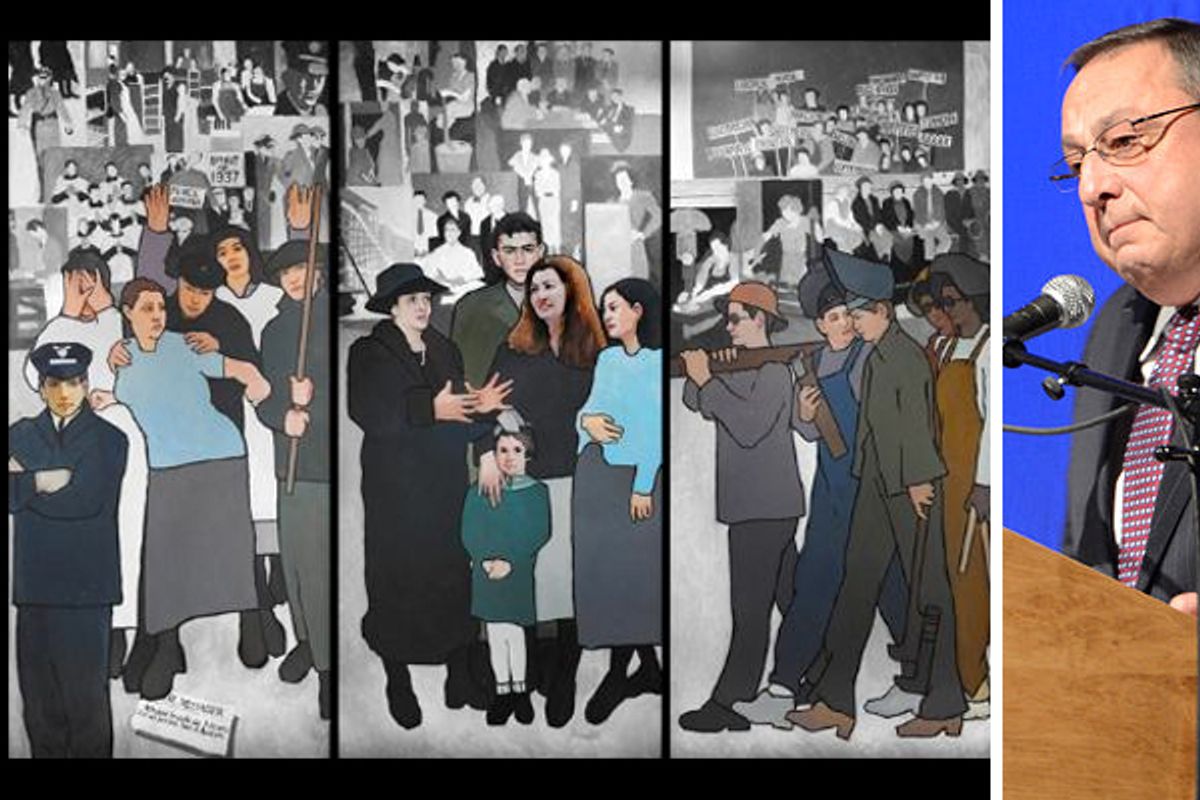 An artist and a historian who worked together to create a 36-foot mural depicting Maine labor history are decrying the governor's plan to remove the artwork from the lobby of the state Department of Labor in Augusta.

The mural, which was painted by the artist Judy Taylor and went up in 2008, features eleven panels with scenes of work life and important moments in Maine's labor history including: child labor, young women at textile mills, the introduction of the secret ballot for union votes, a failed 1937 strike to improve working conditions for women at shoe mills, and FDR Labor Secretary Frances Perkins, who had family roots in Maine. Taylor told Salon she is "very disappointed" with Republican Gov. Paul LePage's plan to remove the mural.

LePage, who has supported anti-union legislation, said this week the mural “sends a message that we’re one-sided, and I don’t want to send that message.” His office said "the message from state agencies needs to be balanced."

Taylor says supporters of the mural are planning a press conference to oppose its removal, but it's not clear whether there's anything concrete they can do to stop the governor's plan.

Before she painted the piece in 2007, Taylor consulted with University of Maine labor historian Charles Scontras. In an interview with Salon, Scontras was withering in his criticism of the governor. Noting that LePage is Franco-American, Scontras said: "French-Americans were literally the spine of the labor force in the textile industry. By taking down the murals you're erasing the cultural heritage of his own ethnicity. I thought maybe he might reflect a good appreciation of that ethnic dimension of the story."

Scontras says that, over the past 150 years, Maine workers went through many of the same travails as those in industrial centers. "Imagine children whipped in the mill. People putting cotton in their ears to dilute the sound of noise in mills to combat deafness. Women using waste cotton to clean after relieving themselves. Imagine being fined an hour's pay if you took a drink of water. Those indignities happened. They're just part of our story," he said.

LePage, for his part, has tried to justify his decision by citing complaints from "some business owners" -- who he has declined to name -- about being exposed to the mural in the lobby of the Department of Labor. His office has also cited an anonymous fax received by the governor's office saying that the mural was reminiscent of "communist North Korea where they use these murals to brainwash the masses."