How do "natural" non-sugar sweeteners stack up?

With Nutrasweet and Splenda taking a hit, we look into -- and taste -- trendy alternatives like agave syrup 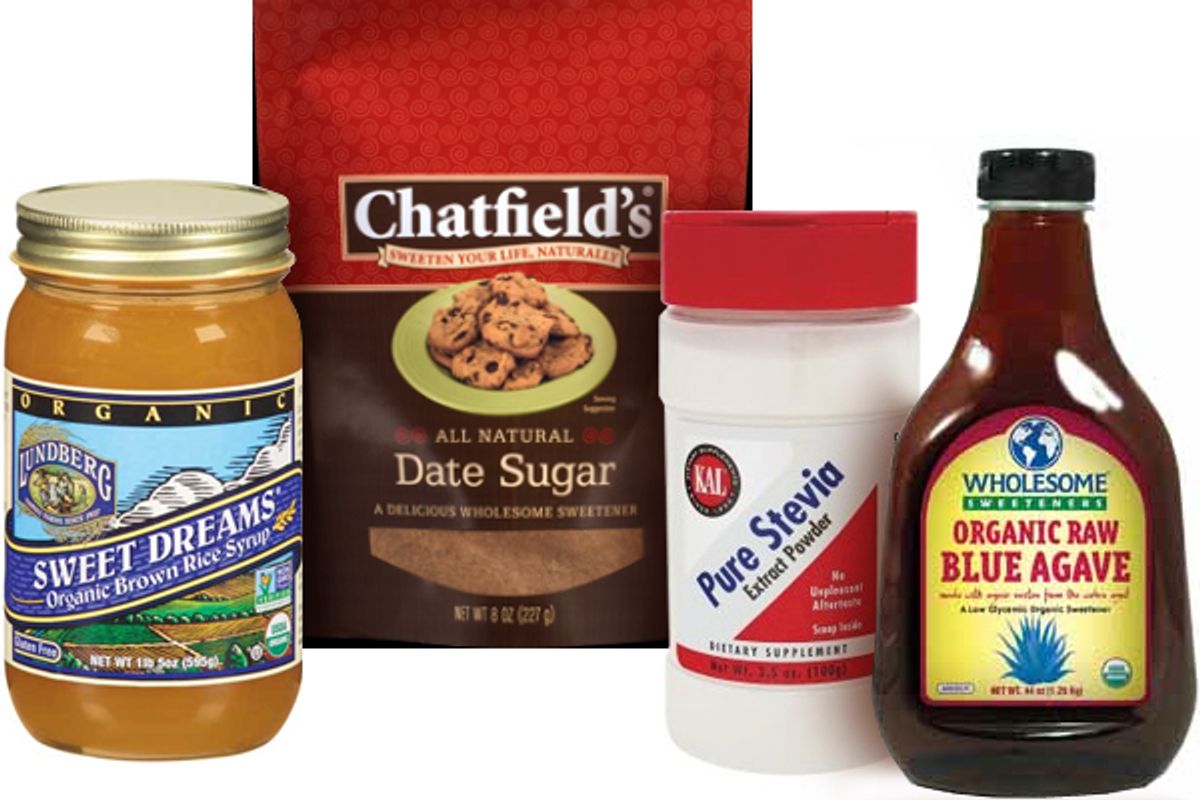 Now that the artificial sweetener aspartame (Nutrasweet) has attracted suspicion, you might be thinking twice about that daily Diet Coke or Splenda (sucralose) in your coffee. Not that this is surprising; even without the stroke and cancer warnings, the word "artificial" alone conjures up images of shadowy figures in lab coats concocting solutions destined for your stomach. Much more reassuring are images of freshly plowed farms tucked in the mountains, like the one on the jar of Lundberg Family Farms' organic brown rice syrup.

Brown rice syrup is just one of many "natural" sweeteners that have taken off in the wake of the backlash against artificial sweeteners like aspartame and sucralose, which, of course, were invented to defeat the dietary axis of evil -- refined white sugar and high fructose corn syrup. Once confined to Berkeley communes, these not-refined-sugar, not-man-made substances pose a huge marketing opportunity, since most people who avoid sugar don't want to get cancer but also aren't ready to commit to a joyless, dessert-free existence. Natural sweeteners are the perfect answer to this conundrum. Right?

The biggest problem is that the term "natural" is a slippery one. Unlike with organic foods, there are no official standards in the U.S. to determine a natural versus unnatural food. Essentially, it's a word that promises a lot -- those wholesome fields -- but can mean nothing.

The potency of that promise depends on the leap people make from "natural" to "healthy." But because the popularity of alternative sweeteners is relatively new, there's no definite consensus on their long-term risks and benefits. Plus, there's no telling what unholy quantities Americans will consume of a sweetener with no yet-known health consequences whatsoever.

Then there's the issue that sugar, in all its caloric and cholesterol-boosting splendor, is just so damn delicious. For one thing, sugar is more than just a sweetener; in baking, it's a structuring agent that resists lumping and introduces air into batter as it creams, creating a fluffy and even texture. It also caramelizes when heated, developing a flavor much more complex than mere sweetness. How can you beat that? For people with diabetes or sugar allergies, natural non-sugar sweeteners can be a godsend. But those seeking a consequence-free sugar fix, beware: not all sweeteners are created equal. We took a standard sugar cookie recipe -- flour, eggs, vanilla extract, butter -- and subbed in a different sweetener for each batch to find out what works, what doesn't, and what actually tastes good.

The facts: Beloved by raw food enthusiasts, agave syrup has become one of the easiest alternative sweeteners to find in grocery stores. It's derived from the Mexican succulent plant agave, of which there are several varieties. It has to be processed to become sweet, and depending on that process, it can be comparable in composition to the dreaded high fructose corn syrup. True, agave has a low glycemic index -- meaning it releases glucose into the blood stream at a slower rate than refined sugar -- so it can help keep blood sugar levels stable. Eating agave as a "healthy" alternative to sugar, however, is pointless; the two have the same number of calories, no nutritional value whatsoever, and, even though it doesn't spike blood sugar, the primary sugar in agave, fructose, has been linked to cancer and cholesterol problems when consumed in large quantities.

The experience: Agave syrup is very similar to honey or maple syrup in terms of consistency, though it has a distinctly deeper, cleaner sweetness than either, without as assertive a flavor. Subbing agave for sugar is relatively simple; because it's sweeter than sugar, a cup of sugar should be replaced by ¾ cup of agave syrup. Don't expect an identical product, though -- our crack team of Salon taste-testers noted that cookies made with agave syrup became "densely chewy" and "raisin-like" in taste, with a "nice complexity."

The facts: Brown rice syrup is what happens when cooked brown rice meets barley malt enzymes. The sweetness comes from starchy complex carbohydrates, which take a couple of hours to digest. As a result, the glucose is released gradually into the bloodstream, providing a steady supply of energy rather than the rush -- and crash -- of cane sugar. Plus, the syrup maintains some of the nutrients in brown rice, like protein, so it's not a total nutritional bust like most sweeteners are.

The experience: Although nutritionally, brown rice syrup is the best you could hope for, it certainly doesn't taste like table sugar. Maltose (the kind of sugar in brown rice syrup) is not as sweet as sucrose, so you'll need about 1¼ cups of syrup to replace a cup of sugar. By itself, brown rice syrup is similar to butterscotch in taste and consistency. Baking it into cookies, though, resulted in an "unpleasantly gummy" texture, and made one tester feel "like I just woke up from a nightmare where I was stuck in a San Francisco commune in 1971, only to find out that it wasn't a dream." The mild butterscotch taste has potential, though, and could work well as a complementary flavor in bread or a savory dish.

The facts: Stevia's not technically a sugar; it's extracted from a sweet herb of the same name. Therefore it has no calories and doesn't raise blood sugar. Though the FDA labeled it a "dangerous food additive" in 1991 after an "anonymous industry complaint" (read: shadowy figures in lab coats), stevia is now back on the market as a "dietary supplement." In the rest of the world, particularly Japan, widespread use of stevia has been going on for decades.

The experience: The biggest drawback of this seemingly perfect sweetener is that it has an "odd chemical aftertaste" that is not weakened in the baking process; one tester described the aftertaste of the cookie as "psychological torture." It's a pleasant, pure sweetness at first that just keeps on going ... and going ... and going, long after you are ready for the taste to end. If you can get used to that, you only need a teaspoon of the powder to replace a cup of sugar. Keep in mind, though, that sugar is more than just a flavoring; take away its structural properties from a recipe and you're left with one crumbly cookie. To adjust, we added in more butter, resulting in a shortbread-like consistency.

The facts: Date sugar is so low-tech it's kind of funny -- it's just dehydrated dates that have been ground into a powder. That means it's completely unprocessed and retains all the nutrients in dates. It's high in fiber and protein, and has lots of vitamins and minerals like iron and potassium. Plus, it qualifies as a raw food. It still contains sucrose, fructose and glucose, so it's not a good alternative for diabetics or people looking to control their blood sugar.

The experience: Date sugar seems to be the Salon staff's favorite sweetener of the bunch. It has a very subtle sweetness that evoked almonds for one tester. Another described it as "nutty, not super sweet." The cookie's texture turned out to be "very crumbly" and "chalky" but not unpleasant. Date sugar's not soluble, so don't try to put it in tea or coffee. It is, however, simultaneously delicious and nutritious, which is no small feat.