After his breathtaking about-face on Libya, what will Newt Gingrich both support and not support next? 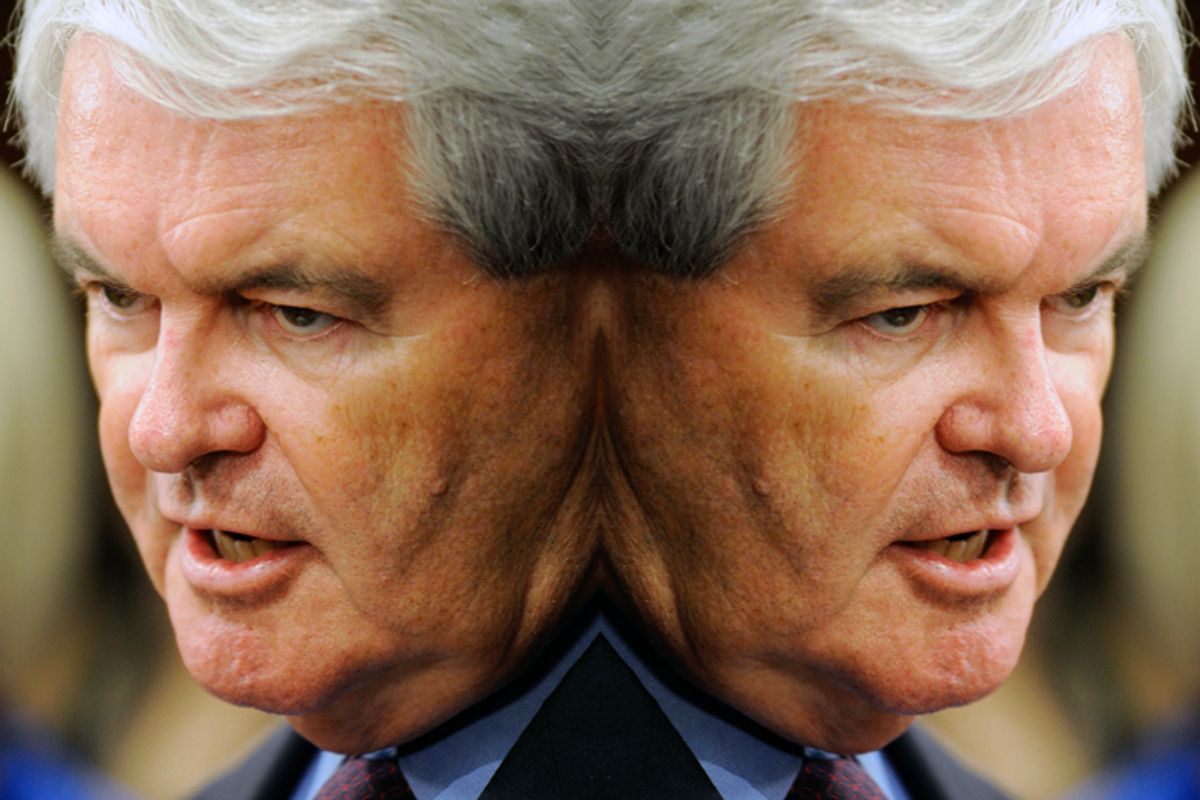 Two weeks ago, Newt Gingrich said this is what he would do about Libya, if he were president:

Exercise a no-fly zone this evening.

Yesterday, here's what Newt said about Libya, where the United States is exercising a no-fly zone:

I would not have intervened.

After a full day of people making fun of him, the former House speaker -- who masquerades as an intellectual policy wonk but who is actually just a master self-promoter -- explained himself in a lengthy Facebook post, Sarah Palin-style, that generally made no sense, Sarah Palin-style.

His position seems to be that he would not have intervened, but once the president said, "Gadhafi must go," the United States had to intervene, to save face, and that's when Newt would've exercised the no-fly zone, if he were president and had made that statement, which he wouldn't have done.

Also, Gingrich says, now that we've done this we should also do it in the Sudan, Syria, Zimbabwe, Yemen and elsewhere, except we shouldn't do it at all, anywhere.

We here at the War Room have just received, from the future, the next two weeks of Newt Gingrich's public statements on Libya, and other assorted matters of national import.

"What the president needs to do is have Congress vote on the use of ground troops in Libya, immediately."

"If I were president I'd unilaterally strike Iran right now instead of wasting our time and resources in Libya."

"My position on Libya has not changed: What the United States should've done is invade with a ground force, after receiving congressional authorization, but only if he hadn't sought United Nations approval, which would've changed everything. Under the current circumstances, with the president already having totally blown it, our best option is a surprise airstrike on Iran."

"This is the single biggest foreign policy disaster I've seen since, literally, the Battle of Blandensburg, which I am writing a book about. We should pull out now and refocus on jobs, here at home."

"Look, if I was the commander in chief, I wouldn't rest until we had Gadhafi's head on a pike outside one of his gaudy palaces."

"Again, I'm distraught to see America so poorly led during this time of great international turmoil. My position is clear: The United States has a jobs crisis exacerbated by the failed policies of our current president, but after we committed ourselves to removing Gadhafi, we forced ourselves to take literally any action at our disposal to make that a reality, as long as we did it right, because if we aren't doing it right, which we aren't, but which I would, we should not do it.

"I also apologize to the hardworking staff at 'Good Morning America' for the incident with the chair, but I am growing tired of constantly answering such transparently biased questions about my very simple position on the conflict in Libya."

"Gay people should be thrown in jail, forever, if they try to marry each other."