"It is possible there may be damage somewhere in the reactor," an official tells reporters 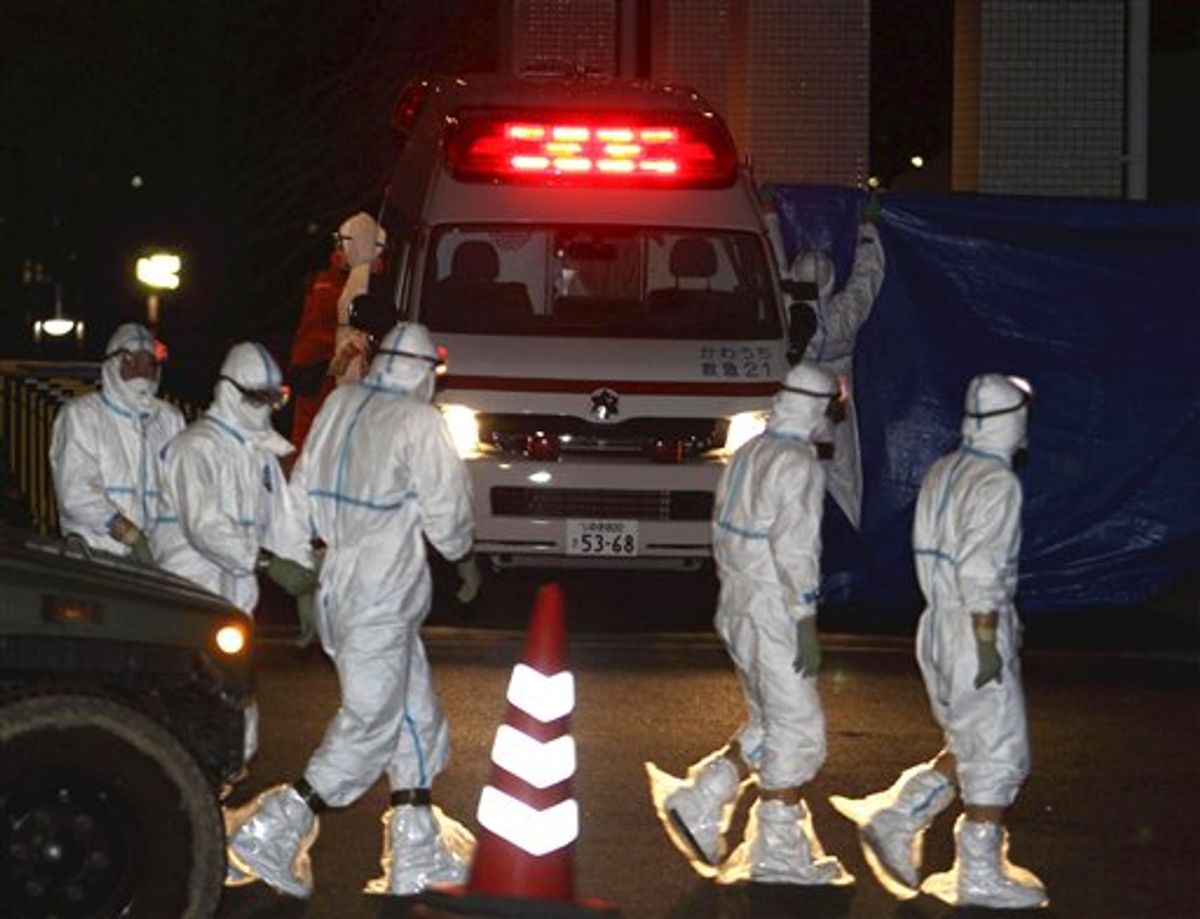 A suspected breach in the reactor core at one unit of a stricken Fukushima nuclear plant could mean more serious radioactive contamination, Japanese officials said Friday, revealing what may prove a major setback in the mission to bring the leaking plant under control.

The uncertain situation halted work Friday at the Fukushima Dai-ichi nuclear complex, where dozens had been working feverishly to stop the overheated plant from leaking dangerous radiation, officials said.

Suspicions of a possible breach were raised when two workers waded into water 10,000 times more radioactive than normal and suffered skin burns when the water splashed over their protective boots, the Nuclear and Industry Safety Agency said.

However, though damage cannot be ruled out, the cause remained unclear, spokesman Hidehiko Nishiyama told reporters.

"It is possible there may be damage somewhere in the reactor," he said, adding later that there was no data suggesting there were any cracks and that a leak in the plumbing or the vents could be to blame.

The confusion was yet another setback to the urgent task of gaining control of the Fukushima nuclear plant 140 miles (220 kilometers) northeast of Tokyo two weeks after a magnitude-9 quake triggered a tsunami that engulfed the facility and knocked out its crucial cooling system.

The plant has been releasing radiation, with elevated levels of radiation turning up in raw milk, seawater and 11 kinds of vegetables, including broccoli, cauliflower and turnips.

The scare caused a run on bottled water in the capital, and prompted city officials to distribute bottled water to families with babies.

Officials are also grappling with a humanitarian crisis in the northeast, where hundreds of thousands of survivors remain camped out in schools and civic buildings two weeks after the tsunami swallowed up swaths of the coast.

Some 660,000 households do not have water and more than 209,000 do not have electricity. Damage could rise as high as $310 billion, the government said, making it the most costly natural disaster on record.

Police said the official death toll rose to over 10,000 on Friday. With the cleanup and recovery operation continuing and more than 17,400 listed as missing, the final number of dead was expected to surpass 18,000, taking into account overlapping figures.

In Fukushima, fires, explosions and spikes in radiation have hampered efforts to contain the nuclear crisis. High radiation levels have forced repeated evacuations, and more than two dozen workers have been injured, according to NISA.

Operators have been struggling to keep cool water around radioactive fuel rods in the reactor's core after the March 11 earthquake and tsunami cut off power supply to the plant and its cooling system.

Damage could have been done to the Unit 3 core when a March 14 hydrogen explosion blew apart its outer containment building.

This reactor, perhaps the most troubled at the six-unit site, holds 170 tons of radioactive fuel in its core.

Previous radioactive emissions have come from intentional efforts to vent small amounts of steam through valves to prevent the core from bursting. However, releases from a breach could allow uncontrolled quantities of radioactive contaminants to escape into the surrounding ground or air.

Associated Press writer Tomoko A. Hosaka contributed to this report.