Will "The Book of Mormon" save Broadway's soul? 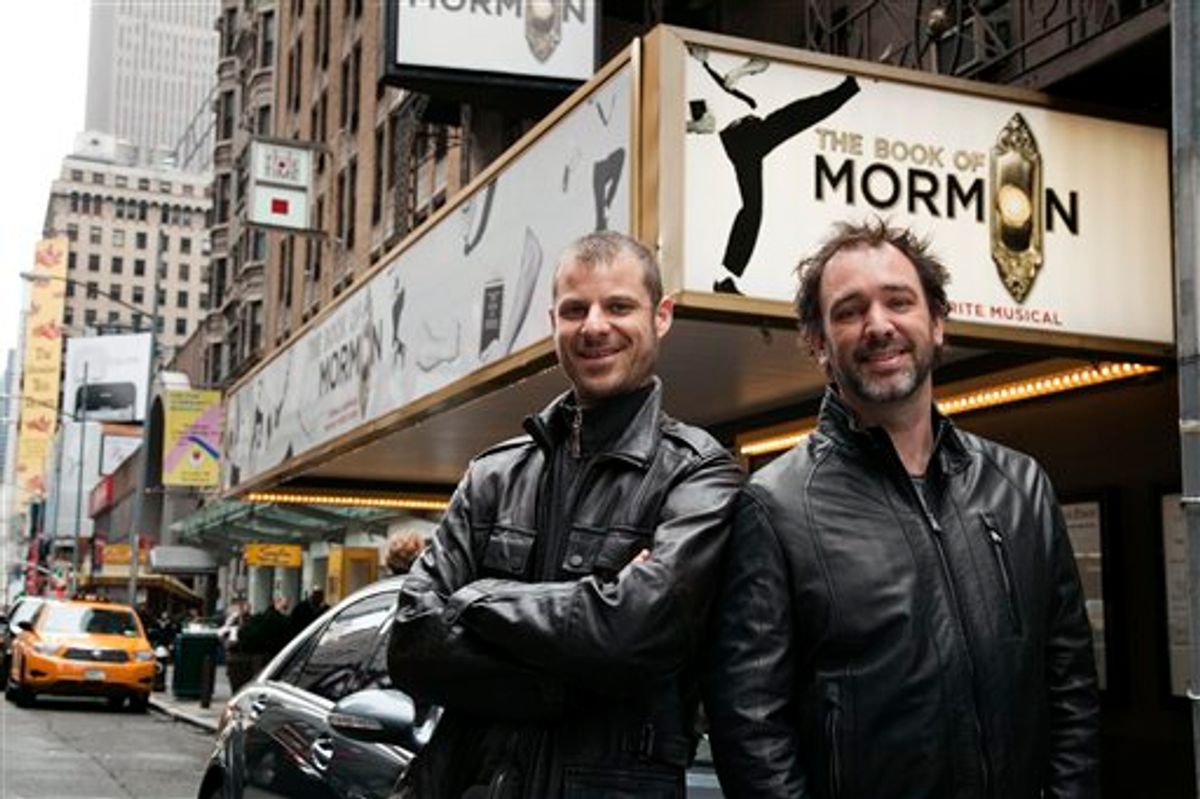 CORRECTS LEFT AND RIGHT In this March 16, 2011 photo, Trey Parker, right, and Matt Stone, co-creators of the Broadway show "The Book of Mormon," pose for a portrait outside the Eugene O'Neill Theatre in New York. (AP photo/Victoria Will) (AP)
--

"It's cheaper to get to Mexico this weekend than it is to see 'Book of Mormon' on Broadway," griped a friend of mine on Twitter earlier this week. That may not be exactly true (unless you're riding a donkey all the way across the border), the new musical from "South Park" creators Trey Park and Matt Stone (along with "Avenue Q's" composer Robert Lopez) has created the new hot ticket during a season full of washes. It almost makes a believer out of us again: During a time when a $56 million play directed by Julie Taymor with music by Bono can't even get off the ground (because it keeps crashing into it?), there is something spiriting about a show whose music hearkens back to old-school Broadway numbers like Rodgers and Hammerstein.

Of course, this is referring to the melody and dance routines, not the lyrics themselves. I was lucky enough to catch a short preview of "The Book of Mormon" -- a fish-out-of-water tale about two missionaries who end up in northern Uganda -- when it was still in rehearsal. Since there were no lighting cues or curtains yet, Trey came out before the preview and told us how we'd know our 15 minutes was up. "You’ll know when it’s over because everyone will sing 'cunt' and then take a bow," said the voice of Eric Cartman. He wasn't lying.

So you would think that some of that language and sacrilegious commentary would perhaps color some theater critics' opinions of the show. If anything, it's made believers out of even those who believed that Broadway's musicals haven't had a chance at resurrection since Mel Brooks' "The Producers." Ben Brantley of the New York Times was particularly effusive:

This is to all the doubters and deniers out there, the ones who say that heaven on Broadway does not exist, that it’s only some myth our ancestors dreamed up. I am here to report that a newborn, old-fashioned, pleasure-giving musical has arrived at the Eugene O’Neill Theater, the kind our grandparents told us left them walking on air if not on water. So hie thee hence, nonbelievers (and believers too), to "The Book of Mormon," and feast upon its sweetness.

Apparently, "The Book " will have you speaking its language in no time at all. As for the inter-mingling of songs like "Fuck You God" and the story of Mormon founder Joseph Smith, Trey and Matt treat their source materials with equal reverence.

But a major point of “The Book of Mormon” is that when looked at from a certain angle, all the forms of mythology and ritual that allow us to walk through the shadows of daily life and death are, on some level, absurd; that’s what makes them so valiant and glorious. And by the way, that includes the religion of the musical, which lends ecstatic shape and symmetry to a world that often feels overwhelmingly formless.

Which is to say, the "South Park" episode that made fun of Smith and got so many family groups up in arms (though apparently the Mormon Church issued a statement saying that they understood Matt and Trey were exercising free speech …"They are fascinating because they really are that nice," says Stone) is less visible here. In reality, this show has a bigger global consciousness than perhaps any mainstream musical, and if you needed a song and dance routine to be that spoonful of sugar to help you swallow the unsightly pill that, hey, Uganda has a huge AIDS epidemic right now and maybe we should all step outside our own tiny dreams and egos and try to better the world somehow, then "The Book Of Mormon" is more than willing to sugarcoat it's message for you in the form of its fantastic musical numbers. Still, this is the "South Park" guys we're talking about here, and as David Rooney of the Hollywood Reporter said in his review of the production:

Religious zealots are not going to roll up, but the show manages to have a comic field day with Mormonism while simultaneously acknowledging – maybe even respecting – the right of everyone to follow any faith they choose. Or invent.

Hey, it still beats watching a chorus member get their sternum crushed to the melodies of U2.