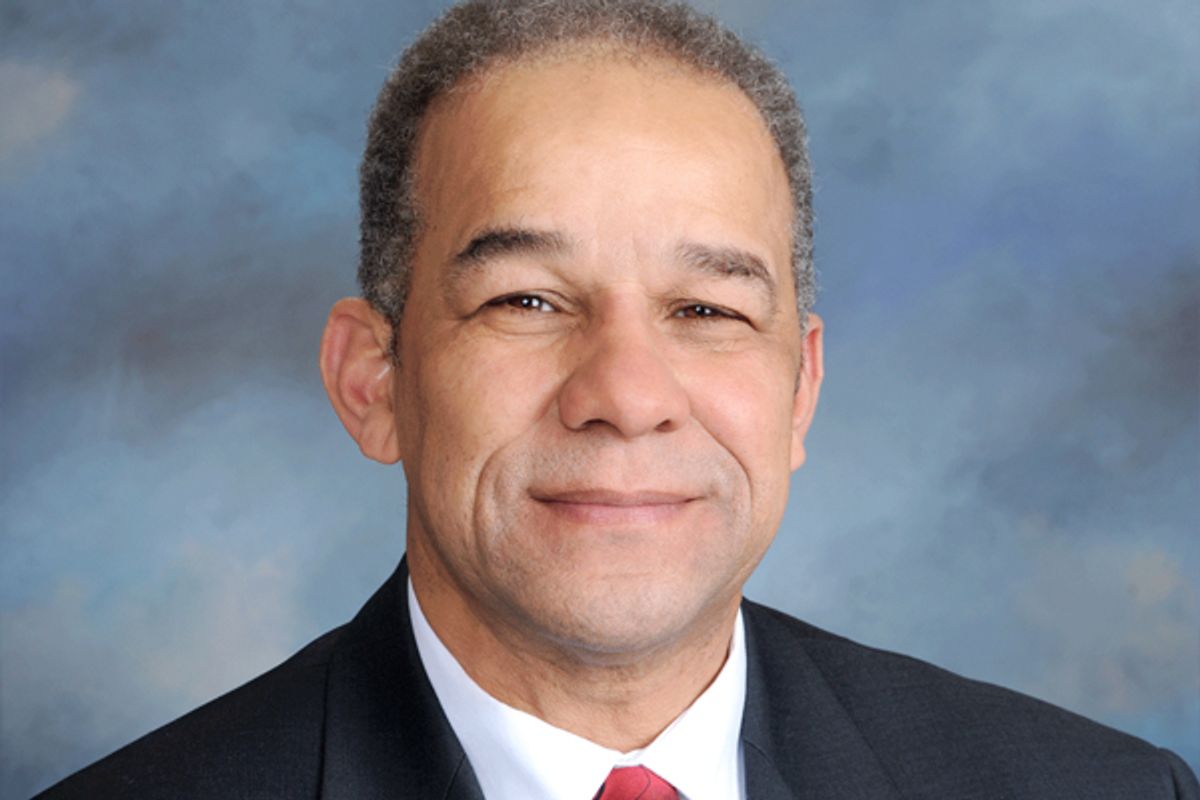 (Updated below with White House response)

One of the most intense scandals the field of psychology has faced over the last decade is the involvement of several of its members in enabling Bush's worldwide torture regime. Numerous health professionals worked for the U.S. government to help understand how best to mentally degrade and break down detainees. At the center of that controversy was -- and is -- Dr. Larry James. James, a retired Army colonel, was the Chief Psychologist at Guantanamo in 2003, at the height of the abuses at that camp, and then served in the same position at Abu Ghraib during 2004.

Today, Dr. James circulated an excited email announcing, "with great pride," that he has now been selected to serve on the "White House Task Force entitled Enhancing the Psychological Well-Being of The Military Family."  In his new position, he will be meeting at the White House with Michelle Obama and other White House officials on Tuesday.

For his work at Abu Ghraib and Guantanamo, Dr. James was the subject of two formal ethics complaints in the two states where he is licensed to practice: Louisiana and Ohio.  Those complaints -- 50 pages long and full of detailed and well-documented allegations -- were filed by the International Human Rights Clinic of Harvard Law School's Human Rights Program, on behalf of veterans, mental health professionals and others.  The complaints detailed how James "was the senior psychologist of the Guantánamo BSCT, a small but influential group of mental health professionals whose job it was to advise on and participate in the interrogations, and to help create an environment designed to break down prisoners."  Specifically:

During his tenure at the prison, boys and men were threatened with rape and death for themselves and their family members; sexually, culturally, and religiously humiliated; forced naked; deprived of sleep; subjected to sensory deprivation, over-stimulation, and extreme isolation; short-shackled into stress positions for hours; and physically assaulted. The evidence indicates that abuse of this kind was systemic, that BSCT health professionals played an integral role in its planning and practice. . . .

In 2003, Louisiana psychologist and retired Col. Larry James watched behind a one-way mirror in a US prison camp while an interrogator and three prison guards wrestled a screaming, near-naked man on the floor.

The prisoner had been forced into pink women's panties, lipstick and a wig; the men then pinned the prisoner to the floor in an effort "to outfit him with the matching pink nightgown." As he recounts in his memoir, "Fixing Hell," Dr. James initially chose not to respond. He "opened [his] thermos, poured a cup of coffee, and watched the episode play out, hoping it would take a better turn and not wanting to interfere without good reason ..."

Although he claims to eventually find "good reason" to intervene, the Army colonel never reported the incident or even so much as reprimanded men who had engaged in activities that constituted war crimes.

James treated numerous detainees who were abused, degraded, and tortured, yet never took any steps to stop or even report these incidents.  Last year, Steven Reisner -- senior faculty member and supervisor at the International Trauma Studies Program, who also teaches at New York University Medical School and Columbia University -- told Democracy Now: "there is a lot of evidence that has been made public showing that the torture programs in the CIA and at Guantánamo, the Department of Defense, were created and overseen by health professionals, particularly psychologists" and that psychologists were at these facilities "to use their professional expertise to break down the detainees." James, argued Dr. Reisner, was directly implicated because:

Larry James was the chief BSCT starting in January 2003. And when you read the standard operating procedures for mental health, for how to -- behavior protocols for detainees during the time that Larry James was the chief psychologist, you find institutionalized abuse and torture -- isolation for thirty days at a time with absolutely no contact, prohibition of the International Committee of the Red Cross to see these detainees, no access even to religious articles, to the Qur’an, unless they cooperate with interrogations, not to mention frequent interrogation.

For his part, Dr. James claims he attempted to protect the detainees under his care from abuse and psychological injury.  Meanwhile, the Louisiana psychology board refused to review the merits of the complaint against James on the grounds that the alleged acts were too old (outside the statute of limitations), while the Ohio board issued a three-sentence, cursory letter which decreed, without any explanation whatsoever, that "it has been determined that we are unable to proceed to formal action in this matter."  So while the charges against him have not been formally sustained by either board, neither have they been evaluated or rejected by any apparent consideration of the merits. Judicial review of the Ohio board's decision is still possible (a Louisiana federal court ruled it lacked jurisdiction to review the board's Statute of Limitations findings).

Despite the overwhelming evidence against him, James should not be deemed guilty in the absence of a formal adjudication.  But the White House's conduct in selecting him is nonetheless baffling, at best.  Of all the psychologists to choose from, why would they possibly choose to honor and elevate the former chief psychologist of Guantanamo and Abu Ghraib at the height of the Bush abuses?  More disturbing still, among those most damaged by detainee abuse are the service members forced to participate in it; why would the White House possibly want to put on a task force about the health of military families someone, such as Dr. James, who at the very least is directly associated with policies that so profoundly harmed numerous members of the military and their families?

This isn't exactly a powerful Task Force, but what this appointment does is have the White House -- yet again -- signal that it does not really take very seriously the Bush torture regime.  On appearance grounds alone, the Obama administration should not be embracing and legitimizing the Bush-era Chief Psychologist of Guantanamo and Abu Ghraib.  Is there really nobody in the White House who was able to come to that realization on their own, or is this part of some twisted "reaching out" effort to show that they view bygones as bygones when it comes to the war crimes our leaders committed and whom the Obama administration continues to protect? Whatever the explanation, the symbolism here is as ugly as the mindset underlying it.

UPDATE: Here is the full text of the email sent by Dr. James, as provided to me yesterday by Harvard Law School’s Human Rights Program:

Message from Dean James for the SOPP Community:

It is with great pride and pleasure that I write to the SOPP community and say that I have been appointed by the First Lady to a White House Task Force entitled Enhancing the Psychological Well-Being of The Military Family.

The first meeting will be at the White House next Tuesday (the 29th) and will be hosted by Mrs. Obama and her staff. Indeed, I feel honored and privileged to represent the SOPP, WSU and the APA in this important endeavor.

Next week I will provide a follow-up e-mail to provide more information.

On its own website, HLS’s Human Rights Program reported that James sent this email "to colleagues and students of Wright State University, where Dr. James serves as Dean of the School of Professional Psychology.”

The White House, however, now tells a much different story. In an email to me from the First Lady’s Communications Director, the White House claims:

Several members of the White House staff are convening a meeting with multiple mental health professionals on Tuesday to discuss issues pertaining to the wellness of military families. SAMHSA and the American Psychological Association have both been asked to attend. We understand that Dr. James is involved with these groups and may have been indirectly invited to attend this meeting.

She claims, however, that he now will not be at that meeting, and further states that "Dr. James has not been appointed to serve in any capacity with the White House."

There’s obviously quite a discrepancy between the claims in the James email as provided by HLS' Human Rights Project and the White House’s claims. Calls to Dr. James regarding this matter have not been returned, but if I speak with him, I’ll post his response to the White House's denials.