The most troubling reports about the Libyan rebels 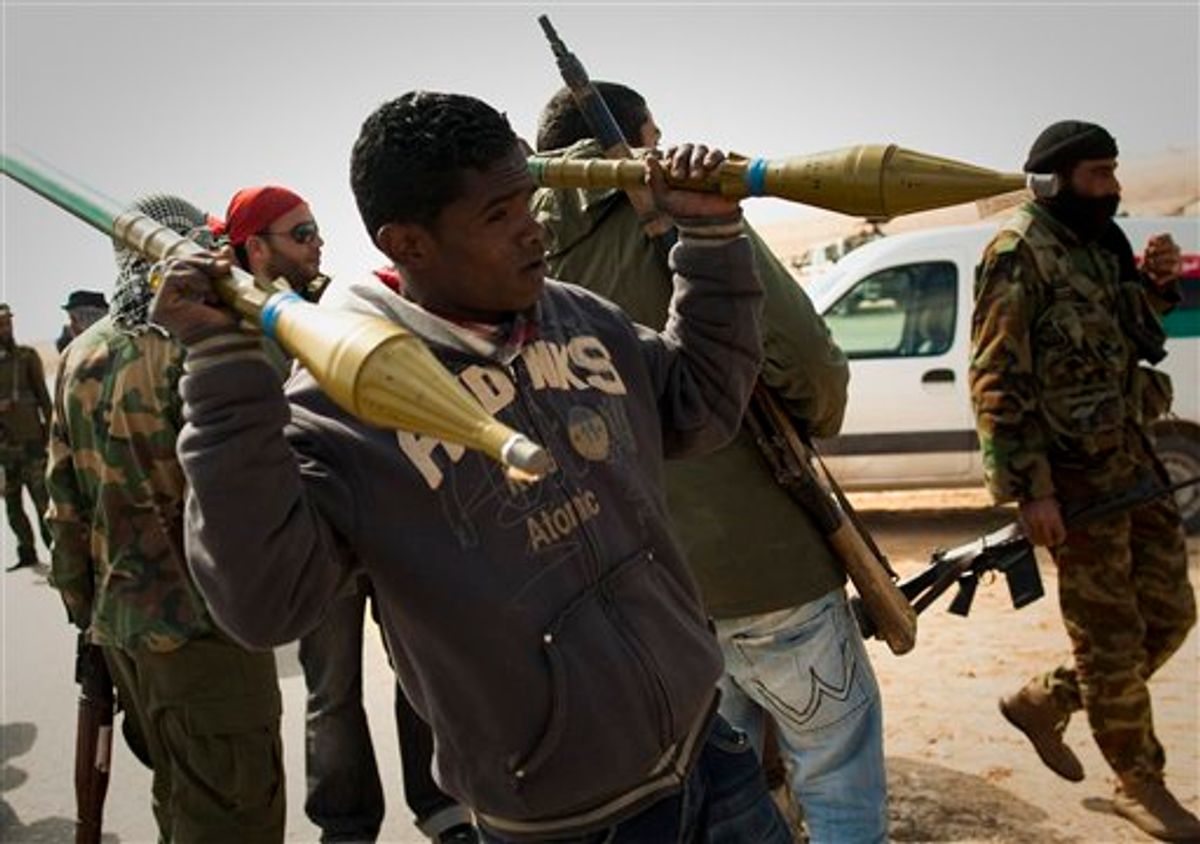 A Libyan rebels carries rockets on a checkpoint on the frontline near Zwitina, the outskirts of the city of Ajdabiya, south of Benghazi, eastern Libya, Thursday, March 24, 2011. (AP Photo/Anja Niedringhaus) (AP)
--

There are still a lot of unanswered questions about the composition of the Libyan rebels that the U.S. and its allies are now supporting in their fight against Moammar Gadhafi. What we do know is that it is a motley group including both former regime figures as well as longtime dissidents. (The Atlantic Wire has a good rundown of the leadership of the rebels here.)

While the Obama administration has insisted that the U.S. mission does not go beyond protecting civilians, it is clear we are supporting the rebel side in Libya's civil war. So it's important to be clear-eyed about who the rebels are. And the reports so far are not all positive.

This is from a Los Angeles Times report headlined "Libyan rebels appear to take leaf from Kadafi's playbook":

For a month, gangs of young gunmen have roamed the city, rousting Libyan blacks and immigrants from sub-Saharan Africa from their homes and holding them for interrogation as suspected mercenaries or government spies. ...

The opposition has acknowledged detaining an unspecified number of sub-Saharan Africans on suspicion of serving as Kadafi mercenaries. Human Rights Watch has described a concerted campaign in which thousands of men have been driven from their homes in eastern Libya and beaten or arrested.

Meanwhile, David Wood at Huffington Post dove into a cache of documents captured in Iraq in 2007 describing the foreigners that came to fight the U.S. forces there. His conclusion? Many of the anti-American foreign fighters were from Libya -- specifically eastern Libya, where the opposition is now based. Wood reports:

Almost one in five foreign fighters arriving in Iraq came from eastern Libya, many from the city of Darnah. Others came from Surt and Misurata to the west. ...

But there also is a dark history to eastern Libya, which is the home of the Islamic Libyan Fighting Group, an anti-Gaddafi organization officially designated by the State Department as a terrorist organization.

The group was founded by Libyan mujahideen returning in the mid-1990s from Afghanistan, where they had gone to fight the Soviets’ Red Army. Building on a radical Islamist credo, they organized to fight the secular corruption of the Gaddafi regime.

The Wall Street Journal has reported that Islamist factions have deliberately been kept out of the spotlight, but "they are believed to have support in eastern Libya and have assumed key functions in the rebel efforts to unseat Col. Gadhafi."

HuffPo's Wood also points to one of the diplomatic cables released by WikiLeaks, written in 2008 and titled "Extremism In Eastern Libya." Here's a taste (emphasis added):

Unlike the rest of the country, sermons in eastern Libyan mosques are laced with phraseology urging worshippers to support jihad in Iraq and elsewhere through direct participation or financial contributions. While senior regime figures, including Saif al-Islam al-Qadhafi, appear to have recognized that the east merits more attention and investment, the reported ability of radical imams to propagate messages urging support for and participation in jihad despite GOL security organizations" efforts suggests that claims by senior GOL officials that the east is under control may be overstated.

McClatchy's Nancy Youssef had an excellent story Thursday drawn from days of interviews on the ground in Benghazi, the rebel capital. She talked to one man at an army base there who pointed out that the leader of the rebel armed forces was until very recently a Gadhafi loyalist:

He openly distrusts the man who had, until Thursday, been charged with running the rebel army, Abdel Fatah Younes, Gadhafi's former interior minister, who defected last month. Until then, he'd spent nearly five decades at Gadhafi's side, including playing a key role in the 1969 revolution against King Idris, which brought the then 27-year-old Gadhafi to power. ...

On Thursday, Younes was replaced and a new commander, Khalifa Huftur, was appointed, the third rebel army leader in less than a month. Younes, however, will stay on as Huftur's chief of staff, according to Air Force Col. Ahmed Omar Bani, the rebels' new military spokesman.

None of this means the United States shouldn't be doing what it's doing in Libya. But there's definitely reason to want to know more about the makeup of the rebel coalition.