At 64, the inevitable is happening -- and I am horrified 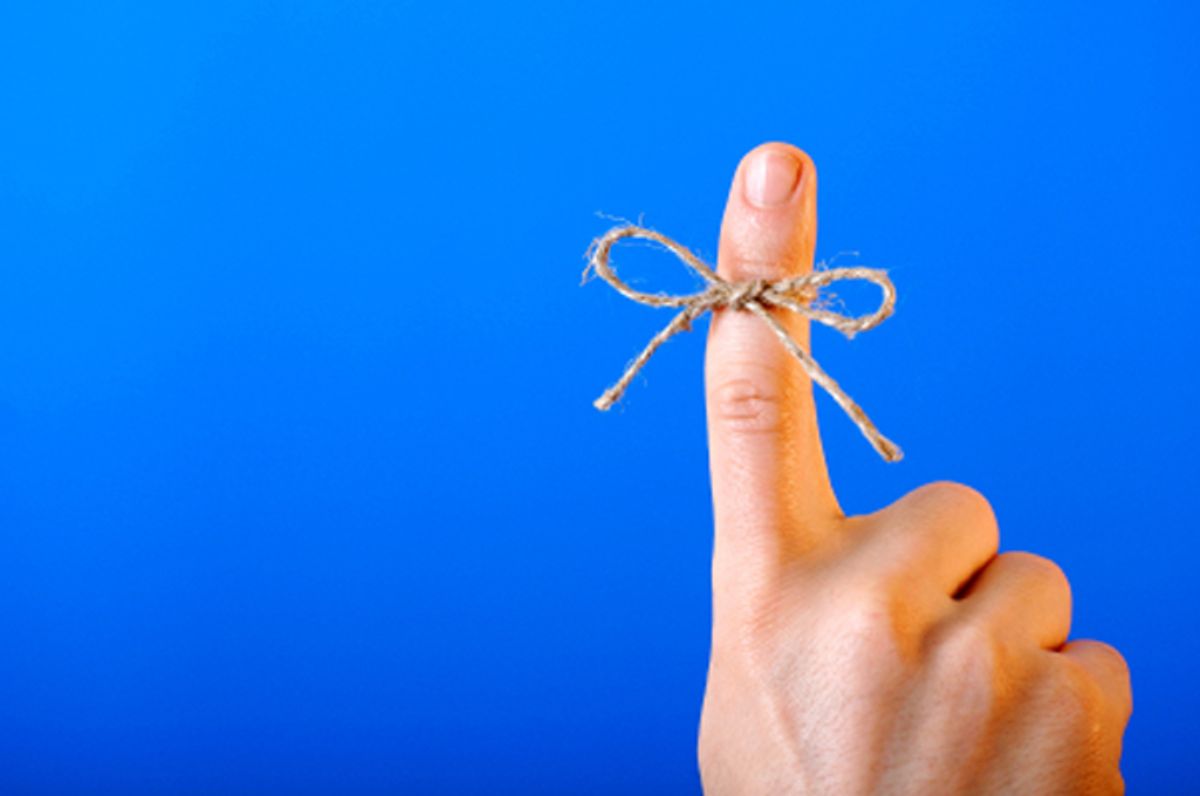 I first noticed it in my emails. I would type "It's above time" when I meant to type "It's about time." Or "It's a fun story" when I had intended "It's a fine story." I would discover the mistake only on proofreading. The first few times, it was a curiosity. A few more errors made it a puzzle. Then a worry. Finally -- a freakout. Now I am King Lear, shaking my fist at the gods.

And when I typed that sentence, I initially typed, "Shaking my first at the gods." Damn.

Everyone misspeaks from time to time; the error flies into the air and disappears. If you misspeak a bit more than you used to, that's a change in degree, not in kind. But a keyboard error will not be denied. Yes, one makes typing errors all of one's life, but to substitute "above" for "about" or "first" for "fist" is to produce a perfect -- and perfectly irrelevant -- word by striking keys that aren't anywhere near the keys of the target word. These are the wrong words.

How about my longhand, to use a term even more ancient than I am quickly becoming. I would have guessed that it was immune, but in reviewing a page of notes I wrote about a character in a novel, I wince to read, "She is quite, antisocial." I meant "quiet" and wrote "quite." Unless "quite" is an adverb modifying "antisocial"? No, the comma gets in the way. But maybe I've taken to inserting random commas. Would I prefer that impairment?

Note that I have to ask about the intended meaning of the construction as if I were dealing with a stranger's writing. That's because I am. A "note to self," if read much later, ceases to feel like a note from self. I have a new response when my wife asks me a question about something I may or may not have done -- did I look for that bill, did I bring in more firewood? I say, "You're asking the wrong guy."

My wife and I engage in unhealthy competition in this dismal race to confusion. She is three years younger, so I am at a disadvantage. It's awful to see the smirk signaling that I've failed to remember something. Still worse is the frown of disbelief, shading into grief, or something I would call pre-grief: the grief for grief to come. My advice on this point is to stay away from movies. If you must watch a movie, immediately afterward write down the title, major actors and a plot summary, and review all of your movie notes every day. When dinner party discussion goes in that direction, you will be the cognitive champ. People will say you are "sharp." (Just hope they don't say "still sharp.") And you will buy your spouse a few more years of freedom from worry.

I recently went to a talk on memory decline, attended mainly by lexical gropers like me. The speaker's opening sentence was "Crossword puzzles don't help." There were some chuckles at her clever identification of our common hope, but the truth is that for the rest of the talk, we sat torn between denial ("What does she know?") and despair ("Goners, all! Goners!").

The doomsday lady said that music doesn't help either -- listening to it, learning it, playing it, memorizing it, even writing it. I wish she were wrong. I blow a horn in several town bands, often in nursing homes, and as I walk down the halls on my way to set up for a concert, I make a point of not looking into the rooms, whose doors are usually wide-open for monitoring or access. I want to respect the residents' privacy, but that's not the only reason.

My mother, who recently died at the age of 100, suffered from dementia in her last decade. During one of my visits to her in the house where she raised me, I mentioned a childhood incident that had taken place in the backyard, and she asked if I had lived there. By this time a question like that did not surprise me. I simply said yes and that I grew up in the back bedroom behind the kitchen. She knew I was her son -- or at least she knew me as someone she loved and was comfortable with -- but she could not put the two entities together, the me at the table and the me growing up in the back bedroom. She said -- not pathetically, but almost philosophically -- "A person should remember something like that." I told her it didn't matter and that the best thing was to enjoy what was going on right now -- us sitting there together while she ate. I said, "Focus on that good canned pear and cottage cheese in front of you."

So it's happening, and I'm horrified. But I also want to say, So what? I don't feel different at all. I'm as happy -- and as unhappy -- as always. I feel as smart -- and as dumb -- as always. If a cloud of unknowing trails behind me as I move forward, So what? The solution is not to look back. And everyone's job is to make no one else look back.

My relative good cheer in the midst of decline not only surprises me, it heartens me. Does this possibly mean that, in the years ahead, as other depredations undermine the apparent quality of my life, I will continue to say, So what? That I will not be miserable, which someone on the outside might mistakenly think -- someone, say, walking by the open door of my room? That in fact I will not be miserable at all? And that a canned pear with cottage cheese will taste pretty good?

Novelist David Carkeet ("Double Negative," "The Full Catastrophe," "From Away") qualifies for Medicare this year. He lives in Vermont.