What the right means when it calls NPR "liberal" 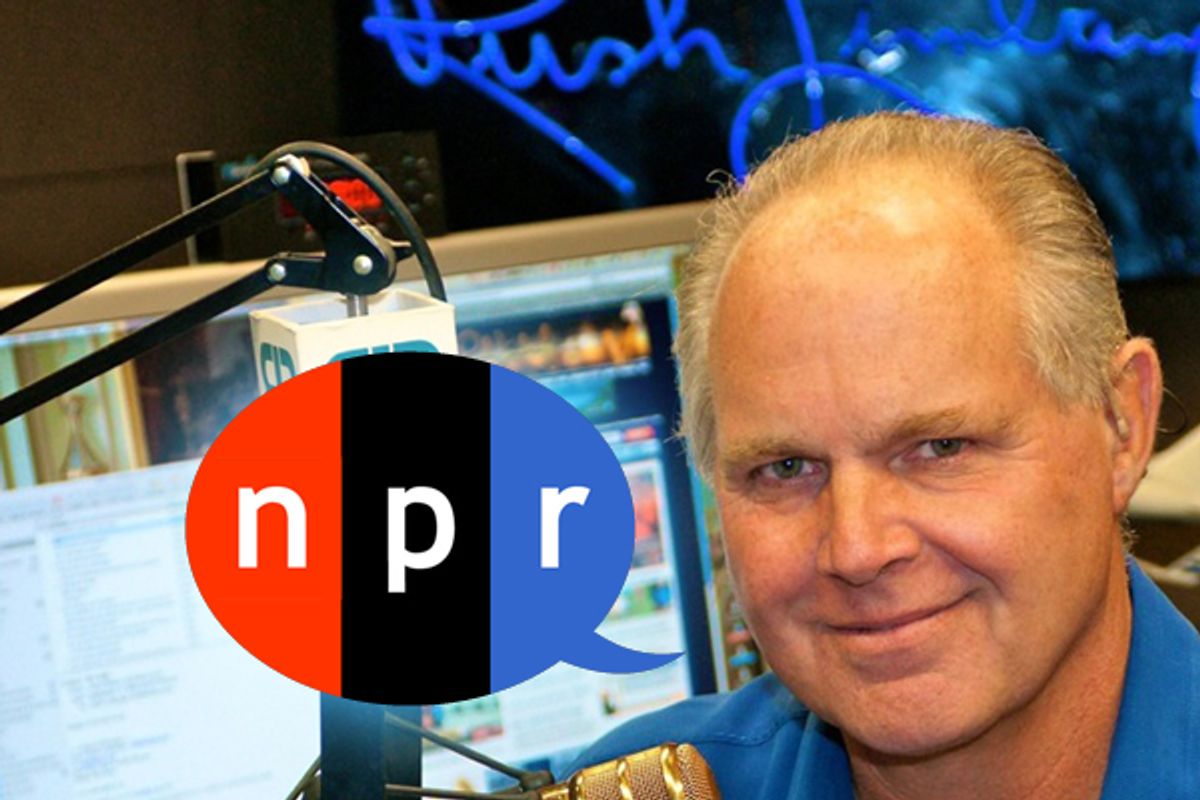 Like Jake LaMotta and his brother Joey in the bloody boxing classic "Raging Bull," we are gluttons for punishment. So here we are again, third week in a row, defending NPR against the bare-knuckled assault of its critics.

Our earlier pieces on the funding threat to NPR have generated plenty of punches, both pro and con. And although most of the comments were welcome, and encouraged further thinking about the value of public media in a democratic society, a few reminded us of the words of the poet and scholar James Merrick: "So high at last the contest rose/From words they almost came to blows!"

Nonetheless, reading those comments and criticisms made us realize there are a couple of points that these two wizened veterans of public broadcasting -- with the multiple tote bags and coffee mugs to prove it -- would like to clarify.

For one, when we described the right-wing media machine as NPR’s "long-time nemesis," it was not to suggest that somehow public radio is its left-wing opposite. When it comes to covering and analyzing the news, the reverse of right isn't left; it's independent reporting that toes neither party nor ideological line. We’ve heard no NPR reporter -- not a one -- advocating on the air for more government spending (or less), for the right of abortion (or against it), for or against gay marriage, or for or against either political party, especially compared to what we hear from Fox News and talk radio on all of these issues and more.

Take, for example, talk jocks John and Ken on KFI-AM Radio in Los Angeles. They beat on California's state Legislature like a cheap piñata. According to the Los Angeles Times, "Within a matter of moments, they refer to various lawmakers as 'traitorous pigs,' 'con artist' and 'Republican dirt bag.' They use gruesome sound effects to suggest the mounting of one legislator's head on a stake -- his entry into the duo's hall of shame."

The personalities, "whose frequent targets are taxes, labor unions and illegal immigrants, not only reach more listeners than any other non-syndicated talk show in California but also have the ear -- and fear -- of Sacramento's minority party.

"'There is nary a conversation about the budget that does not involve the names John and Ken,’ said Darrell Steinberg (D-Sacramento), the state Senate leader." And that's true whether what they say is grounded in fact or simply made up wholesale out of flimsy, opinionated cloth.

So what do conservatives really mean when they accuse NPR of being "liberal"? They mean it's not accountable to their worldview as conservatives and partisans. They mean it reflects too great a regard for evidence and is too open to reporting different points of views of the same event or idea or issue. Reporting that by its very fact-driven nature often fails to confirm their ideological underpinnings, their way of seeing things (which is why some liberals and Democrats also become irate with NPR).

That's why our favorite new word is "agnotology." According to the website WordSpy, it means "the study of culturally-induced ignorance or doubt," a concept developed in recent years by two historians of science at Stanford University, Robert Proctor and his wife, Londa Schiebinger.

Believing that global climate change is a myth is one example of the kind of ignorance agnotologists investigate. Or the insistence by the tobacco industry that the harm caused by smoking is still in dispute. Or the conviction that Barack Obama is a closet Muslim, and a radical one at that, who may not even be from America.

Those first two illusions have been induced by big business in a cynical attempt to keep pumping profits from deadly pollutants, whether fossil fuels or nicotine. The third, dreamed up by fantasists of the right-wing fringe, is in its own way just as toxic and has been tacitly, sometimes audibly, encouraged by certain opponents of President Obama who would perpetuate any prevarication to further blockade his agenda and deny him and fellow Democrats reelection.

None of them is true; rather, they fly in the face of those of us who belong to what an aide to George W. Bush famously called "the reality-based community [who] believe that solutions emerge from your judicious study of discernible reality.'' He told journalist Ron Suskind, ''That's not the way the world really works anymore. We're an empire now, and when we act, we create our own reality."

To the accusers of NPR, the created reality of however they define "liberal" is not the same as what they mean when they call themselves "conservative." If it were, the two would be exact reverse images of each other. Where media are concerned, all you have to do to know this is not the case is to hold them up, side-by-side. If "liberal" were the counterpoint to "conservative," NPR would be the mirror of Fox News, Rush Limbaugh, Glenn Beck and James O’Keefe, including the use of their techniques as well as content. Clearly it isn’t. To charge otherwise is a phony gambit aimed at nothing less than quashing the public’s access to non-ideological journalism, narrowing viewpoints to all but one. We know from firsthand experience that any journalist whose reporting threatens the conservative belief system gets sliced and diced by its apologists and polemicists at Fox and on talk radio.

Remember, for one, when Limbaugh took journalists to task for their reporting on torture at Abu Ghraib? He attempted to dismiss the cruelty inflicted by American soldiers on their captives as a little necessary "sport" for soldiers under stress, saying: "This is no different than what happens at the Skull and Bones initiation … you [ever] heard of the need to blow some steam off?"

The Limbaugh line became a drumbeat in the nether reaches of the right-wing echo chamber. So it was not surprising that in a nationwide survey conducted by the Chicago Tribune on First Amendment issues, half of the respondents said there should be some kind of press restraint on reporting prison abuse. Half or more said they "would embrace government controls of some kind on free speech, particularly when it has sexual content or is heard as unpatriotic." Many of those people came after NPR for reporting what actually happened at Abu Ghraib.

But to clear up one other thing, what NPR also isn’t, is what it could be.

In our support for its much-needed survival, admittedly we may have been a bit fulsome in our praise. Like many commentators who posted after our previous two pieces, as regular listeners we know there is room for improvement, the need for more diverse voices and for more courageous journalism that reports not merely what the powerful say but what they actually do for their paymasters.

Americans need more and sustained reporting on what the journalist William Greider calls "the hard questions of governance" -- those questions of how and why some interests are allowed to dominate the government’s decision-making while others are excluded. Who gets the money and who has to pay? Who must be heard on this question and who can be safely ignored? None execute this kind of reporting better than Amy Goodman and Juan Gonzalez on "Democracy Now," which, while carried by many public radio and television stations, is not distributed nationally by either NPR or PBS. Public media -- radio and television -- too rarely challenge the dictum: "News is what people want to keep hidden; everything else is publicity."

Yet in the words of Confucius, better a diamond with a flaw -- a big flaw -- than a pebble without. For all that it provides -- but mainly because it is a true journalistic, rather than ideological, alternative to commercial and partisan broadcasting -- we continue to support government funding of public media until such time as a sizable trust or some other solid, independent source of funding, unfettered by political interference, can be established that will free us to tell the stories America most needs to hear. Short of that we’ll need the courage, as one of our journalistic heroes, the late George Seldes, wrote, "to tell the truth and run."