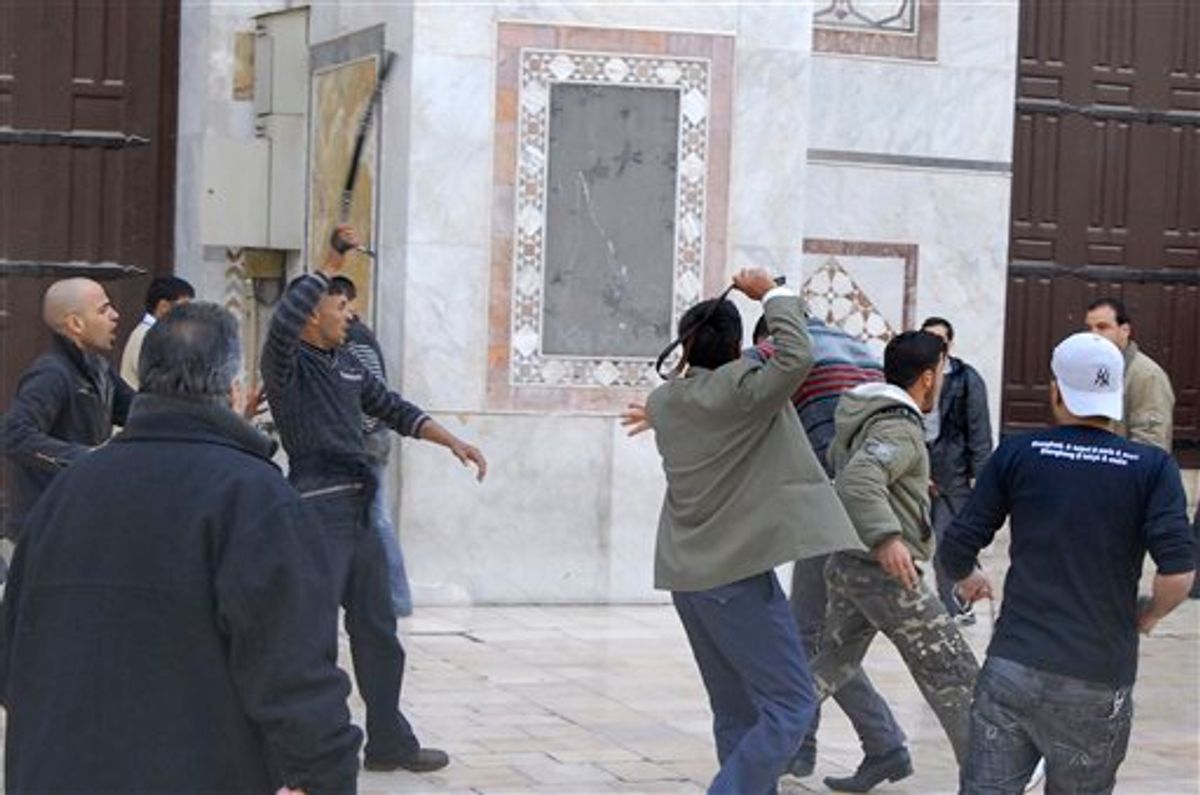 Syrians anti and pro-Assad protesters clash after Friday prayers outside the Omayyad Mosque in Damascus, Syria, Friday, March 25, 2011. Thousands of Syrians took to the streets Friday demanding reforms and mourning dozens of protesters who were killed during a violent, week long crackdown that has brought extraordinary pressure on the country's autocratic regime, activists and witnesses said. (AP Photo/Muzaffar Salman) (AP)
--

Violence erupted around Syria on Friday as troops opened fire on protesters in several cities and pro- and anti-government crowds clashed on the tense streets of the capital in the most widespread unrest in years, witnesses said.

Soldiers shot at demonstrators in the restive southern city of Daraa after crowds set fire to a bronze statue of the country's late president, Hafez Assad, a resident told The Associated Press. Heavy gunfire could be heard in the city center and witnesses reported several casualties, the resident said on condition of anonymity for fear of reprisals.

An activist told the AP that witnesses had reported one demonstrator shot dead by security forces in the coastal city of Latakia, and another slain in the central city of Homs. He said several people had been hospitalized in Latakia.

In the capital, Damascus, people shouting in support of the Daraa protesters clashed with regime supporters outside the historic Umayyad mosque, hitting each other with leather belts.

The violence erupted after tens of thousands of Syrians took to the streets across the country, shouting calls for greater freedoms in support of a more than week-long uprising in Daraa, according to witnesses, activists and footage posted online.

The demonstrations and ensuing crackdown were a major escalation of the showdown between President Bashar Assad's regime and the crowds in Daraa who -- inspired by pro-democracy unrest elsewhere in the Arab world -- began protesting conditions in the drought-stricken south last week in demonstrations that have now spread around the country.

An activist in Damascus in touch with eyewitnesses in the southern village of Sanamein said troops there opened fire on demonstrators trying to march to Daraa, a short distance away. He said there had been witness reports of fatalities, some claiming as many as 20 slain, but those could not be independently confirmed.

Much of Damascus was tense, with convoys of young people roaming the streets in their cars, honking incessantly and waving out pictures of Bashar Assad and Syrian flags. The convoys briefly blocked streets in some areas.

About 200 people demonstrated after the Friday prayers at the Thawra Bridge, near the central Marjeh Square, chanting "our souls, our blood we sacrifice for you Daraa!" and "freedom! freedom!" They were chased by security forces who beat them some of them with batons and detained others, an activist said on condition of anonymity for fear of government reprisals.

Thousands flooded Daraa's central Assad Square before the shooting broke out, many from nearby villages, chanting "Freedom! Freedom!" and waving Syrian flags and olive branches, a resident told The Associated Press by telephone.

Speaking on condition of anonymity for fear of reprisals, he claimed that more than 50,000 people were shouting slogans decrying presidential adviser Buthaina Shaaban, who promised Thursday that the government would consider a series of reforms in response to a week of unrest in Daraa.

A human rights activist, quoting witnesses, said thousands of people gathered in the town of Douma outside the capital, Damascus, pledging support for the people of Daraa. The activists asked to remain anonymous for fear of retribution.

Security forces dispersed the crowd by chasing them away, beating some with batons and detaining others, an activist said, asking that his name not be published for fear of reprisals by the government.

In the city of Aleppo, hundreds of worshippers came out of mosques shouting "with our lives, our souls, we sacrifice for you Bashar" and "Only God, Syria and Bashar!"

Residents in Homs said hundreds of people demonstrated in support of Daraa and demanded reforms.

The activist said that in Latakia, more than 1,000 people marched in the streets after Friday prayers. In the northern city of Raqqa, scores marched and several people were detained, he said.

And in the western city of Zabadani, near the border with Lebanon, several people were detained after protesting, he said.

Journalists who tried to enter Daraa's Old City -- where most of the violence took place -- were escorted out of town Friday by two security vehicles.

"As you can see, everything is back to normal and it is over," an army major, standing in front of the ruling Baath party head office in Daraa, told journalists before they were led out of the city.

Security forces appeared to be trying to reduce tension in Daraa by dismantling checkpoints and ensuring there was no visible army presence on the streets for the first time since last Friday, when the protests began.

Rattled by the unrest, the Syrian government Thursday pledged to consider lifting some of the Mideast's most repressive laws in an attempt to stop the weeklong uprising from spreading and threatening its nearly 50-year rule.

But the promises were immediately rejected by many activists who called for demonstrations around the country on Friday in response to a crackdown that protesters say killed dozens of anti-government marchers in Daraa.

"We will not forget the martyrs of Daraa," a resident told The Associated Press by telephone. "If they think this will silence us they are wrong."

Assad, a close ally of Iran and its regional proxies, Hezbollah and Hamas, has promised increased freedoms for discontented citizens and increased pay and benefits for state workers -- a familiar package of incentives offered by other nervous Arab regimes in recent weeks.

Shaaban, the presidential adviser, also said the Baath party would study ending a state of emergency that it put in place after taking power in 1963.

The emergency laws, which have been a feature of many Arab countries, allow people to be arrested without warrants and imprisoned without trial. Human rights groups say violations of other basic liberties are rife in Syria, with torture and abuse common in police stations, detention centers and prisons, and dissenters regularly imprisoned for years without due process.

The death toll from the weeklong crackdown was unclear and could not be independently confirmed, although activists say it was in the dozens before Friday and could have been as high as 100. Shaaban said 34 people had been killed in the conflict.